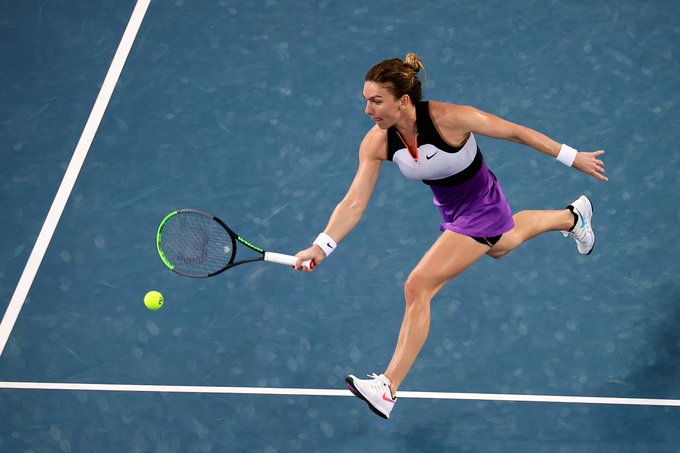 Simona Halep reeled five games in a row to defeat Ajla Tomljanovic 4-6 6-4 7-5 to reach the third round at the Australian Open.

The Romanian came back from 5-2 down in the deciding set to edge past a very good Ajla Tomljanovic on Margaret Court Arena.

Next for Halep is Veronika Kudermetova while on Rod Laver Arena, Naomi Osaka made short work of Caroline Garcia, winning 6-2 6-3.

The start of the match saw a few nerves from Tomljanovic as she looked to be over-aggressive against Halep’s consistency early on.

This saw the former finalist control points and take advantage to take the early break.

However the Australian quickly responded and started to find solutions as she controlled points but found the aggression at the right times when needed.

Good depth mixed with angles and Tomljanovic took control winning four games in a row for a 4-2 lead.

Although Halep quickly responded with a break of her own, the Romanian was seemingly frustrated with the amount of errors she was producing.

As Tomljanovic consistently mixed up her power and shot direction, Halep was struggling to find quick patterns of play to shorten the points.

There was no sign of letting up in the second set as she continued to move Halep around the court and control her aggression in a productive manner.

After four breaks in a row and a service hold each, the tempo started to slow down which gave the former finalist a chance to dictate the rhythm and show her consistent quality that makes her one of the best players in the world.

Observing the weaknesses, Halep gained the crucial break in the seventh game and held on to force a deciding set.

The final set saw Tomljanovic unwilling to fade away from the battle as she continued to deliver hammer-like forehands past Halep as she took an early 2-0 lead.

A resilient Halep dug deep and continued to work the angles as she won the next two games to level the set up.

There was no drop in quality from either player as these rallies were some of the best of the tournament with regular 20+ shots testing both players fitness.

However Tomljanovic’s mix of incredible power, exceptional court coverage and use of drop-shot was a recipe to out-play and outmanoeuvre the Romania.

Three games in a row saw the Australian storm to a 5-2 lead and move within one game of the biggest victory of her career.

However Halep was too experienced to know that this match wasn’t over just yet and she used her experience to force the issue as a cautious Tomljanovic couldn’t close out the match.

Three games in a row for Halep this time saw the match level at 5-5 in a tense match with the crowd heavily involved.

The level of quality increased with each rally as Tomljanovic didn’t seem to let the match slip between her fingers.

In the end though, Halep outlasted the Australian in a match that lasted two hours and 36 minutes to book her place into the third round.

A match of the year contender which had all the elements of a dramatic grand slam match.

Although Tomljanovic outhit and outplayed Halep for most of the contest, it was the Romanian who dug deep and found her champion qualities to come through.

Next for Halep is Veronika Kudermetova on Friday.

Related Topics:australian openSimona Halep
Up Next