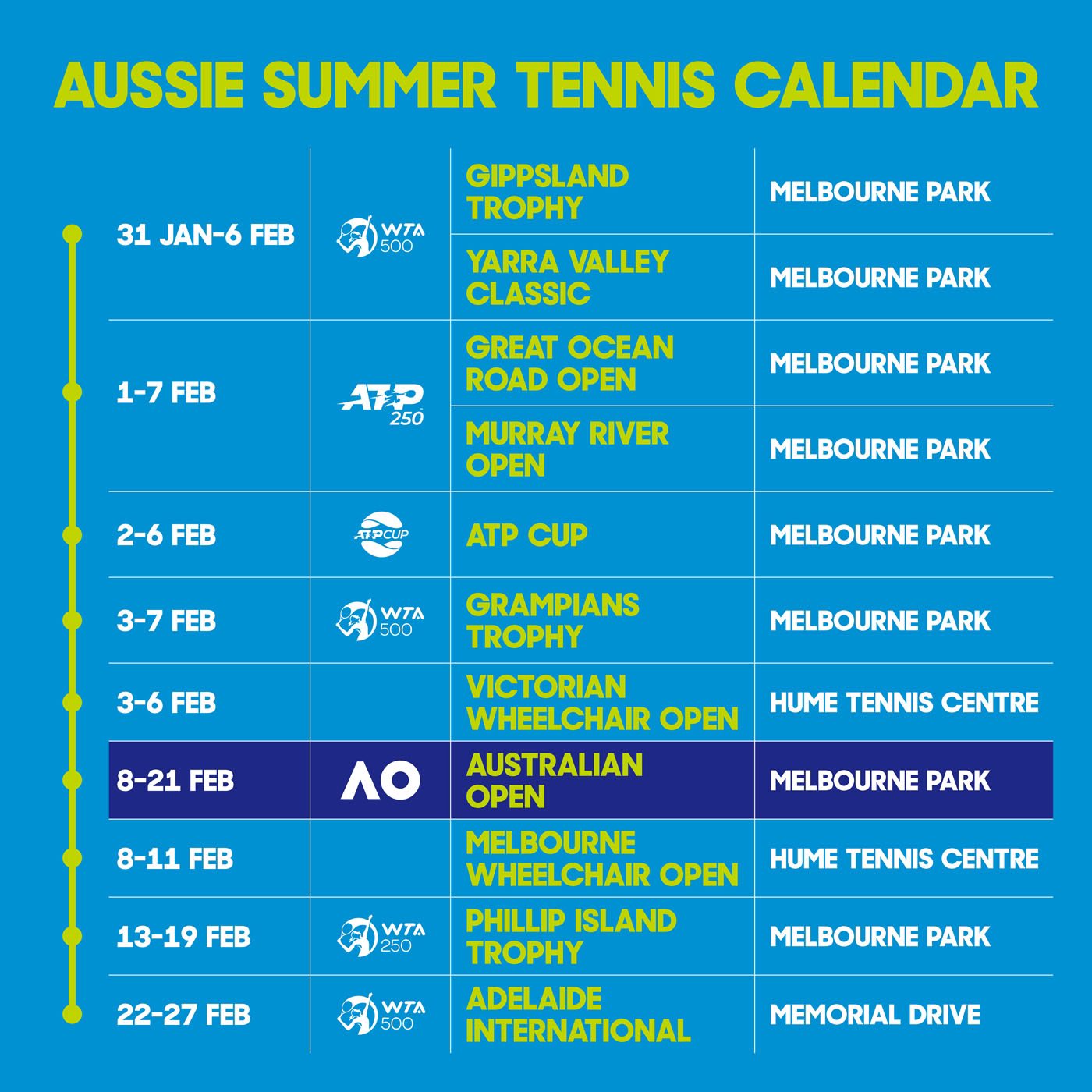 A breakdown of all the tournaments taking place this month in Australia (twitter.com/AustralianOpen)

In one of the busiest weeks in tennis history, six tournaments are being staged over the next seven days at Melbourne Park.

Two WTA 500 events already got underway on Sunday down under, with eight of the world’s top 10 players split between those two draws.  On Monday, two ATP 250 tournaments begin, which include top 20 players such as Stan Wawrinka and Grigor Dimitrov.  On Tuesday, the second annual ATP Cup commences, featuring all top 10 players not named Federer.  And on Wednesday, a third WTA 500 event will proceed, headlined by Major champions Bianca Andreescu, Victoria Azarenka, and Angelique Kerber.

This daily preview will highlight the most intriguing matches at all six events each day this week.  Monday’s action begins at 11:00am local time on Margaret Court Arena and 1573 Arena, with the outer courts starting at 10:30am local time.

This will be Serena’s first match since she withdrew from Roland Garros four months ago due to an Achilles injury.  During the American hard court season, Serena went 8-3, culminating with a three-set loss to Victoria Azarenka in the US Open semifinals.  And she is 3-0 against Gavrilova, with three straight-set wins on hard courts.  The 26-year-old Australian was ranked inside the top 20 in 2017, but is now 451st in the world after missing a year due to injuries.  Despite Gavrilova’s fiery competitive spirit, this should be a straightforward affair for the GOAT.

Pliskova loves playing on Australian hard courts, with a 31-5 cord over the last four years.  So she is a heavy favorite against the 20-year-old world No.132 who just earned her first career WTA-level hard court win on Sunday.

The Gippsland Trophy, a WTA 500 Event

23-year-old Teichmann was a surprise finalist last August in Lexington, but 16-year-old Coco should prevail as long as her service issues from last summer do not recur.

Halep was an outstanding 23-3 last year, with three tour titles in an abbreviated season.  In 2021, she’ll be motivated to return to glory at a Major, especially coming off a 6-1, 6-2 Roland Garros walloping at the hands of eventual champion Iga Swiatek.  While Potapova is currently ranked outside the top 100, the 19-year-old Russian is a player to keep an eye on.  This will be their first career meeting.

If you’re a fan of flashy shot-making, this may be your match of the day.  They played twice this past October, splitting those two meetings.  But the hard court encounter went to Tiafoe.

Just three years after Cilic was a finalist at the Australian Open, he’ll be unseeded at this year’s event after a lackluster few seasons.  On Monday he faces the unpredictable Frenchman, who he is 4-2 against.

Don’t expect too many breaks between these excellent, experienced servers.  Anderson has claimed all four of their previous meetings in straight sets.

Melbourne Media Day Frenzy: Sabalenka, Osaka And Others Speak Out Ahead Of Australian Open

Nick Kyrgios has had positive things to say about Daniil Medvedev ahead of their second round meeting in Montreal. 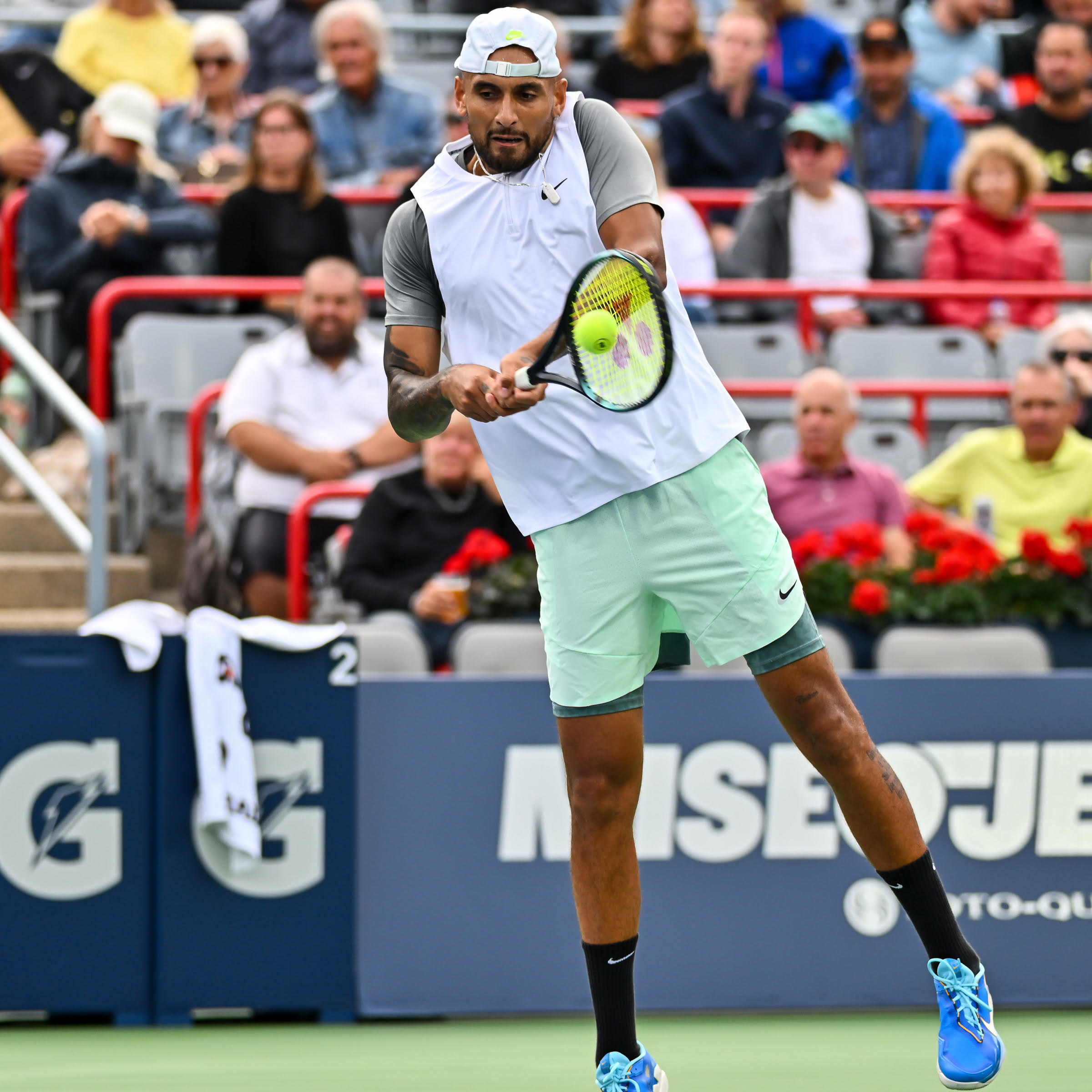 Nick Kyrgios has spoken highly of world number one Daniil Medvedev ahead of their second round clash in Montreal.

Kyrgios is in some of the best form in his career having reached the final of Wimbledon last month.

That has been followed up by a doubles title in Atlanta and a singles and doubles triumph in Washington.

Now the Australian is into the second round in Montreal after defeating Sebastian Baez 6-4 6-4.

Now Kyrgios takes on the ultimate challenge as he takes on world number one Daniil Medvedev who heads into the match in form himself having beaten Cameron Norrie to win the Los Cabos title.

Speaking ahead of the match the Australian admitted he was confident but has nothing but admiration for Medvedev’s game style, “I know I’ve got Medvedev next which kind of sucks,” Kyrgios told the Tennis Channel.

“I feel like against pretty much any player right now, I’d feel extremely confident. Obviously I feel confident going up against him, but we all know what he can produce. It’s going to be a good match for sure. I’m a bit tired but I’m gonna try and give him a good run.

“I’d like to play 95 per cent of the draw in the next round but if it’s anything like today, I know there’s going to be a lot of balls coming back and it’s going to be tough. A part of me wants the challenge, but a part of me knows it’s not going to be easy at all. I’m not gonna shy away from it, I’m going to do everything I can to recover and rest.

“But he’s a hell of a player and it’s incredible to see how he plays. He returns so far back, hits some crazy shots that we’ve never seen before. He does it his own way, he’s unorthodox and really special in the game. I love watching him play because he just looks so crazy out there, it’s like nothing I’ve ever seen.

“I love people who just play the way they want to play. He’s comfortable in his own skin so hopefully it will be two contrasting styles as well. Not going to get much different tennis from me, I’m going to serve massive and play big and try to dictate. If I do that well, usually it works.”

Kyrgios is hoping to have good results this week as well as next week in Cincinnati so he can be seeded for the last grand slam of the year at the US Open.

The duo have met on three occasions with Kyrgios leading the head-to-head 2-1 but it’s Medvedev who won their last meeting at the Australian Open in four sets.

Bianca Andreescu reached the second round in her home tournament while Naomi Osaka and Emma Raducanu crashed out. 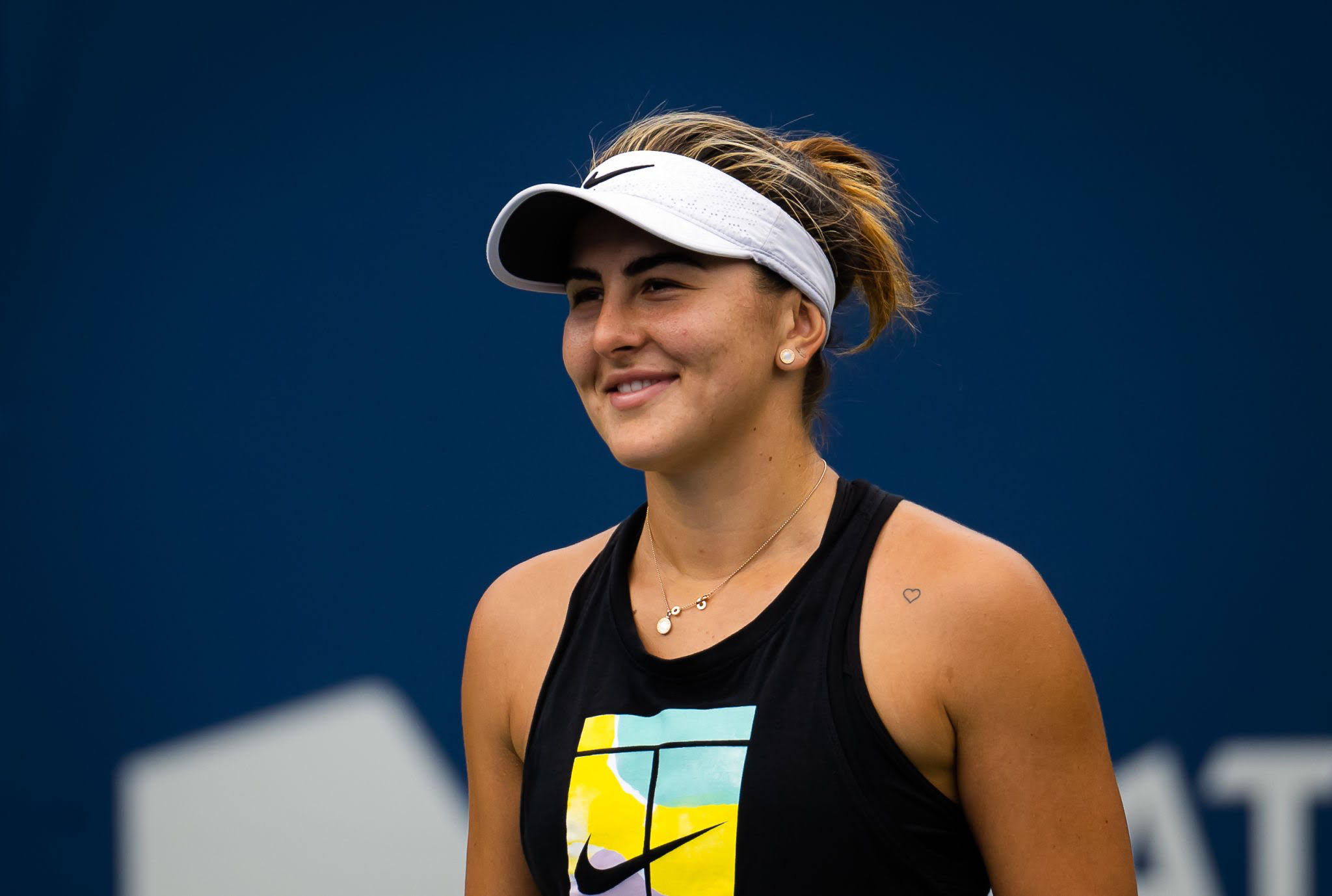 The 2019 champion made her return three years after winning the title and reached the second round to the delight of the Canadian fans.

Bianca Andreescu is into the second round of the National Bank Open being hosted at Sobeys Stadium in Toronto, Ontario after beating the San Jose champion Daria Kasatkina in straight sets 7-6, 6-4.

Although the scoreline seemed pretty routine this match had everything with highs and lows for both players but the Toronto native managed to get through.

“She played really well, super consistent and I am so happy I had that mental toughness to get through in two sets and that was key for me.”

In the first set both players got off to a very nervous start as the first five games of the match were breaks of serve before Andreescu was able to secure the first hold of the match to take a 4-2 lead.

At 5-3 with the Russian serving the Canadian earned two set points but was denied by the number 11 seed and the next game broke the world number 53 to go back on serve at 5-5.

The Toronto native responded by breaking right back once again and served for the set for the second time but Kasatkina broke once more to force a tiebreaker.

The Russian found herself up 4-2 but lost the following two points and the Canadian fought back and managed to take the tiebreaker 7-5 and the first set 7-6 in one hour and 25 minutes.

Dealing with high blood pressure she was seen by the trainer and the doctor during the break between both sets and she was given medication to rectify the problem.

Once again holding serve seemed to be the issue as after the world number 53 held the opening service game of the second set she broke to take an early 2-0 lead.

Kasatkina responded by breaking right back and holding to even the set at 2-2 and broke once again using her powerful forehand on breakpoint to seal the break.

Again she failed to consolidate the break and the Canadian broke her right back and after consolidating the break broke again to take a 5-3 lead and a chance to serve out the match.

Andreescu wasn’t able to close it out as the number 11 seed broke right back but in the following game, the Canadian responded by winning the match on her opponent’s serve.

After the match in her post-match on-court interview, she was asked if she felt the exact same emotions she had back in 2019 and what she will remember from the match.

“I wished I enjoyed it a bit more and I was really looking forward to having that positive attitude that I always have.”

Andreescu will now face Alize Cornet on Wednesday after the Frenchwomen was able to beat another Frenchwomen Caroline Garica in a tough three-set match on Monday night.

A busy Tuesday in Toronto

It was a busy day in Toronto and here are some of the other results from day 2 at the National Bank Open.

Belinda Bencic the number 12 seed got by the Czech qualifier Tereza Martincova in straight sets 6-4, 6-2, and Naomi Osaka was forced to retire down 7-6, 3-0 against Kaia Kanepi due to a back injury. 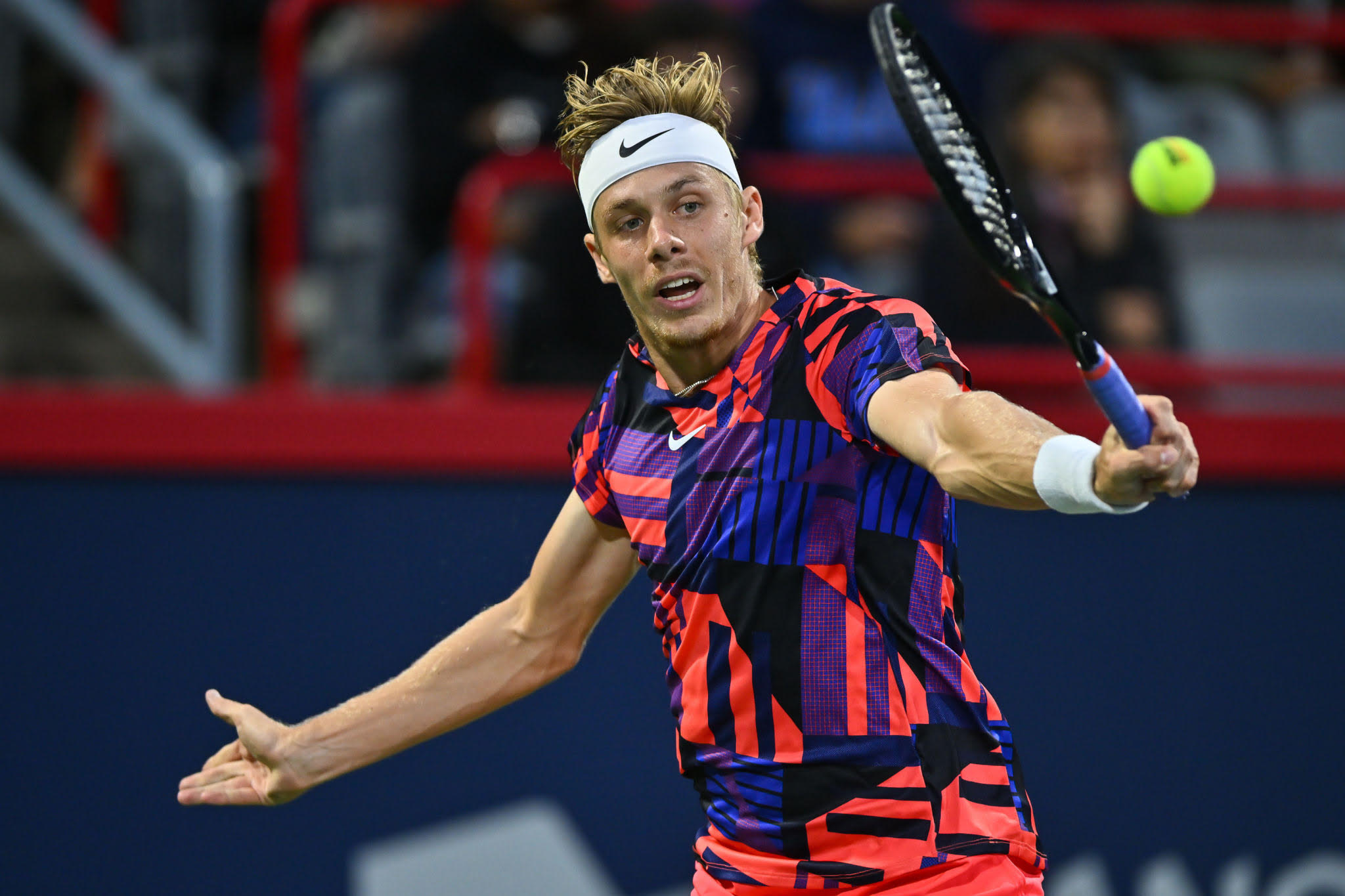 The Canadian lost another first-round match on Tuesday after his match was suspended due to rain on Monday night.

Denis Shapovalov seems to be going through a very rough patch, he has one win in his last 10 matches and on Tuesday was bounced out of his home event by the Aussie Alex De Minaur in straight sets 7-5, 7-6.

The match which was originally scheduled for Monday night was suspended with De Minaur up 7-5 6-6 and at 3-3 in the second set tiebreak when the skies opened up.

19 hours later they were both back on Center Court for the fastest match of the day which last less than 10 minutes with the Canadian hitting a double fault and 3 consecutive unforced errors to end the match.

The first set was extremely tight and it was only at 5-5 that the Aussie was able to seal the crucial break and serve out the match. The same could be said for the second but the Toronto native was able to force a breaker.

De Minaur will now face Grigor Dimitrov on Wednesday after the Bulgarian beat the Canadian wildcard who was making his National Bank Open debut and a Montreal native Alexis Galarneau.

The number 15 seed was able to win in straight sets 6-4, 7-6 but in the second set had to come back from 5-2 to force the breaker and then win the match.

In other action, the number 12 seed Diego Schwartzman beat the Spaniard Alejandro Davidovich Fokina in three tight sets 1-6, 6-3, 6-4 in two hours and 23 minutes.

Gael Monfils to the delight of the French Canadian crowd on Grandstand needed three sets to beat another Spaniard Pedro Martinez 7-6, 3-6, 6-2 in two hours and 50 minutes.