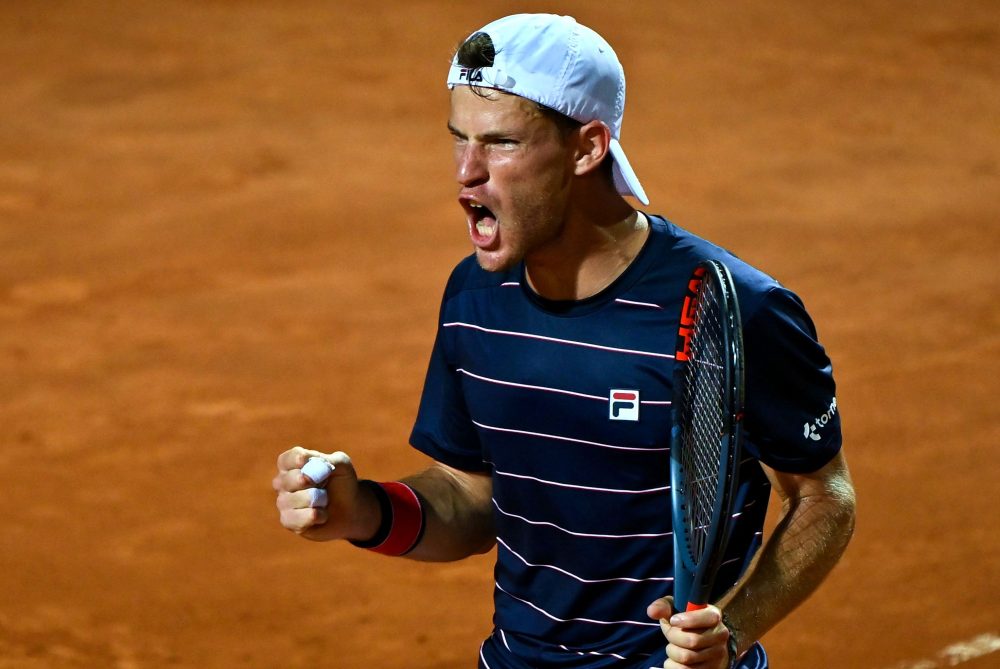 Diego Schwartzman played one of the best matches of the year Saturday night against Denis Shapovalov (internazionalibnlditalia.com)

The top two seeds will play for the women’s title, while Novak Djokovic vies for his fifth championship against whatever is left of the phenomenal Diego Schwartzman.

The 28-year-old Argentine has reached his first Masters 1,000 final.  Less than 48 hours ago, he earned his first career win over Rafael Nadal.  And late last night, Diego played a spectacular, three-plus-hour semifinal against Denis Shapovalov.  Coming back to defeat the world No.1, who’s only loss this year was his own doing, seems unfathomable.  However, Novak brought his New York crankiness with him to Rome this week, becoming extremely frustrated on court.

This is the third Rome final in four years for Simona Halep, though she’s yet to obtain the winner’s trophy.  But the top seed is on a 13-match winning streak, and won her last two events played.  Her opponent is on a nine-match winning streak in Rome, and looking to successfully defend her title.

Halep leads their head-to-head 7-4, though Pliskova has claimed the last two.  They’ve split their two matches contested on clay.  That includes their most prominent encounter, in the 2017 Roland Garros semifinals, which Halep won in three sets.  Simona was pushed to the limit yesterday by Garbine Muguruza, with her semifinal lasting an hour longer than Karolina’s straight set win over Marketa Vondrousova.  But Halep should still feel fresh for today’s championship match.  She did not play in New York, and all her other matches this week were straight-setters.  Simona also should take a lot of confidence from out-dueling Muguruza yesterday afternoon.  Much like Garbine, Pliskova has looked better this week with every passing round, and will look to utilize her power to overcome the two-time Major champion.  By contrast, Halep will use her speed and returning ability.  And based on Halep’s current form, her third Rome final may be the charm.

This is the 10th championship in Rome for Djokovic, with a 4-5 record previously.  He’s actually lost his last three finals here, to Rafael Nadal, Sascha Zverev, and Andy Murray.  Schwartzman will be the first seeded player Novak faces this week, though his opponents have caused him much anguish thus far. Diego’s efforts have been remarkable, playing an astoundingly high level.  While Schwartzman is 0-4 against Djokovic, he’s pushed Novak in their two previous battles on clay.  They went to a final set three years ago at Roland Garros as well as last year in the semifinals of this event.  But expecting Diego to do so again today following his last two matches seems unrealistic.  Djokovic is the favorite to win his fifth title, and gain momentum just six days ahead of the French Open.

Related Topics:2020 FRENCH OPEN
Up Next

Tennis Has A Conundrum When It Comes To COVID-19 Testing