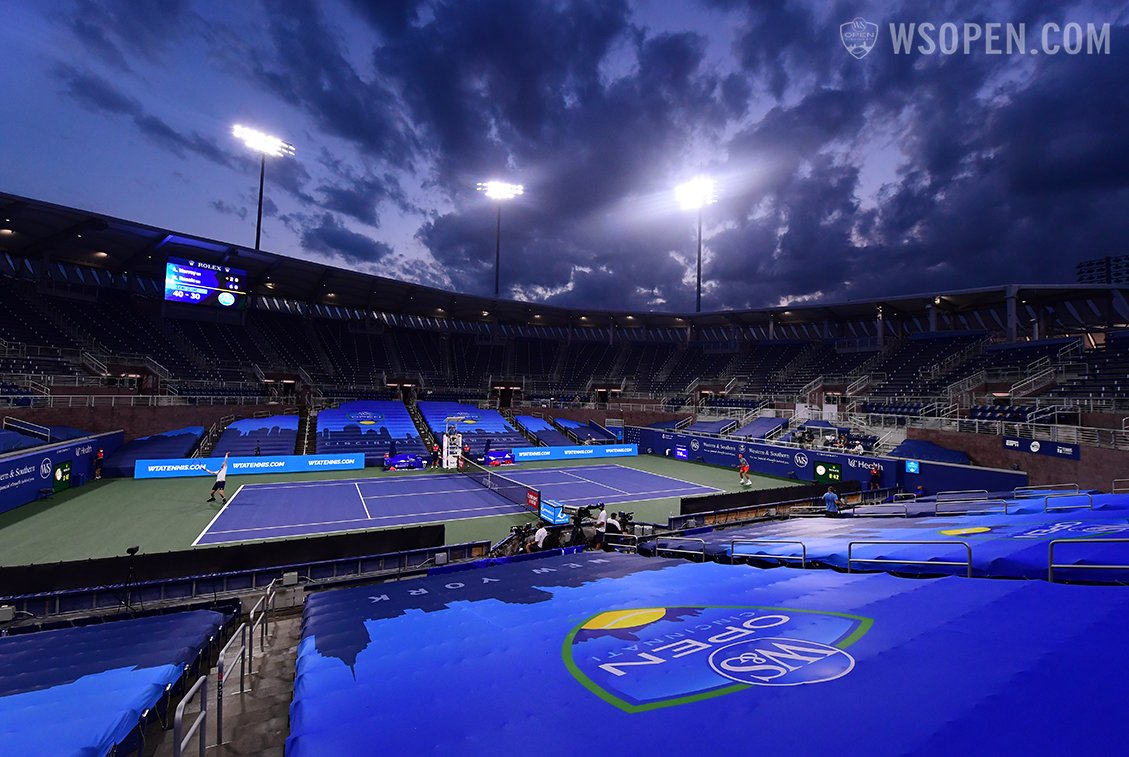 The Grandstand is serving as the main stadium for this year's Western & Southern Open (wsopen.com).

It’s quarterfinal day at the first big tennis event since the pandemic began, with many of the seeded players already eliminated.

On the men’s side, three of the four top seeds remain, though they are joined by four unseeded players.  On the women’s side, only one of the top seven seeds remain, leaving plenty of room for new players to make their first deep run at a big event.  Who will advance to the semifinals, and gain momentum ahead of next week’s US Open?

The defending champion of this event, and finalist on these US Open grounds a year ago, Medvedev has breezed through two rounds thus far.  Bautista Agut faced a bit more resistance yesterday from Karen Khachanov, though he advanced fairly comfortably after dropping the first set.  It was the 32-year-old Spaniard who claimed their only previous meeting.  However, that was three years ago and well before Medvedev became the player he is today.  Since last year, Roberto has found more success against top 10 players, which historically was a huge stumbling block in his career.  Between 2017 and 2018, Bautista Agut was 1-15 against top 10 opposition, but he earned four wins in 2019 alone.  He’ll walk onto the court believing he can win, but Medvedev remains the favorite in what I expect to be a grueling competition.

Osaka is 3-0 against Kontaveit, though they haven’t played in over two years.  Both players have taken their games to another level since that time.  Osaka looks to dictate play with her power, while Kontaveit’s aggression is often more subtle.  Anett possesses extremely consistent groundstrokes, applying pressure to her opponents without committing many unforced errors.  The 24-year-old Estonian already has 19 wins in this abbreviated season, with seven of those since the tour re-started earlier this month.  I give Osaka the slight edge based on their history and considering how easily Naomi defeated Dayana Yastremska yesterday.  But Kontaveit will force Osaka hit more balls today, and that could prove to be troubling for the two-time Major champion.

Other Notable Matches on Day 5:

Novak Djokovic (1) vs. Jan-Lennard Struff.  Djokovic leads their head-to-head 3-0, including a four-set win earlier this year at the Australian Open.

Johanna Konta (8) vs. Maria Sakkari (13).  Konta has won three of their four meetings, with Sakkari’s only victory coming on clay.

Milos Raonic vs. Filip Krajinovic.  Both men have steamrolled their way through the draw, having yet to drop a set.

Elise Mertens (14) vs. Jessica Pegula (Q).  Mertens reached the final in Prague just two weeks ago, while Pegula was the champion in Washington last summer and a finalist in Auckland to start this season.

Ons Jabeur vs Victoria Azarenka.  Jabeur has already won 20 matches this year.  By contrast, Azarenka went a full year without a match win before this week.

Related Topics:Western and Southern Open
Up Next