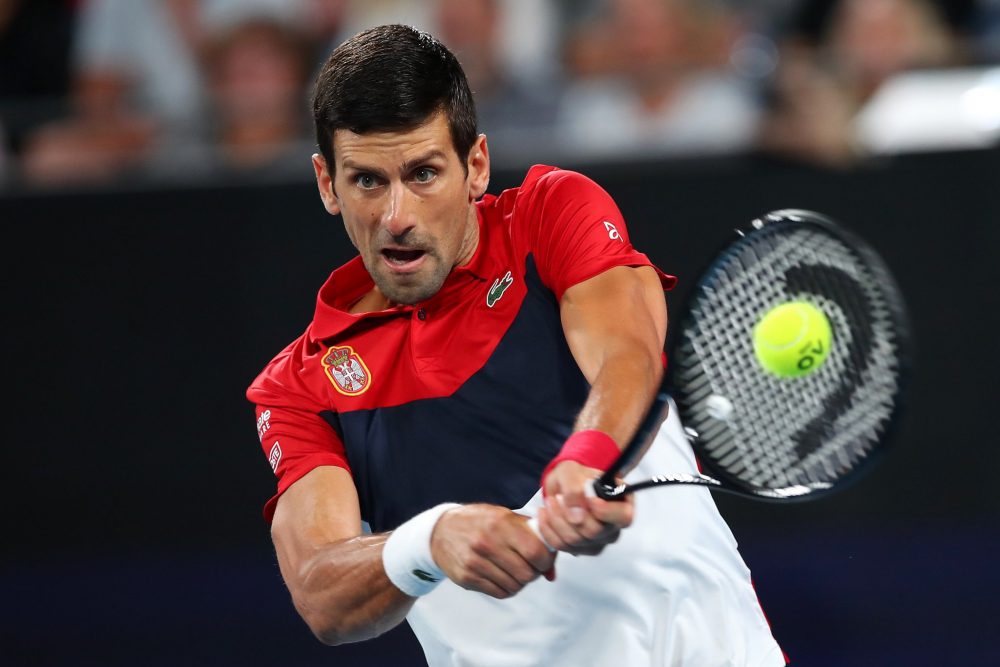 Novak Djokovic has resuscitated Serbia’s chances of winning the ATP Cup after ousting world No.1 Rafael Nadal in a must-win clash.

The world No.2 produced some of his best tennis throughout the high-quality encounter that saw him prevail 6-2, 7-6(4) after almost two hours of pulsating action. Extending his hard court record against the Spaniard to nine consecutive wins on the surface. During their latest clash, Djokovic went off guns blazing with a clinical opening set before facing more resistance during the second. Producing an impressive display behind his serve, where he fired 12 aces and won 78% of the points.

“Every time I get to play Rafa, we get to play a lot of exciting points. There were some incredible exchanges today.” Djokovic said during his on-court interview.
“I started off the match perfectly. Everything worked for me. I think the serve got me out of trouble in the second set when I was love-fourty.” He added.

Taking to the court for their 55th meeting on the ATP Tour, it was Djokovic who dominated from the onset. Settling down into the match the quicker out of the two, the Serbian broke at the start to gain an early advantage. Nadal illustrated glimmers of his top form, but it was not consistent enough to derail his rival. Seven games into the clash, Djokovic struck once again by securing a double break for a 5-2 lead at the expense of two consecutive errors from Nadal. Firmly in control, he closed the opening set out with three consecutive aces. Throughout the opener, the Serbian dropped just four points behind his first serve and none behind his second.

Nadal, who had only ever lost two singles matches whilst representing Spain in team events, refused to go down without a fight. Midway through the second frame, a marathon Djokovic service game that exceeded 10 minutes saw the Spaniard have five break point opportunities. However, he was unable to convert all of them as Djokovic battled to draw level at 3-3.

“If he broke my serve at that moment the match could have gone to a third set and then it would have been anybody’s game.” Djokovic reflected about that game.
“I’m glad to hold my nerves at the end.”

It looked as if Serbia would clinch victory with ease. A tussle at the net concluded with a lob forcing Nadal to make an error. Rewarding Dkokovic two chances to break for 6-5 and serve the match out. However, it wasn’t to be for team Serbia as Nadal displayed some emphatic tennis to battle back and hold serve. Prompting an erupting of cheers from his supporters.

Will little disparity between the two titans of tennis, it would be a single point in a tiebreaker that would prove critical to the outcome. A Nadal backhand crashing into the net moved Djokovic to a 5-4 lead with two serves in hand. Moving to match point, victory was secured at the expense of another error from team Spain. This time coming from Nadal’s forehand.

“It is really unbelievable. The amount of support we got is Brisbane and here in Sydney. You guys took it to a different level.” The 16-time champion commented on the crowd.

Following Roberto Bautista Agut’s straight sets win over Dusan Lajovic, the winners of the first ever ATP Cup will be decided in the doubles. Where Djokovic will return to the court, but not Nadal.

“That’s the plan. I got to go back to the locker room and speak to the team. It’s a team event, team effort and it’s a team decision as well.” He said.
“If he (the captain) picks me, I be back (on the court) soon).“