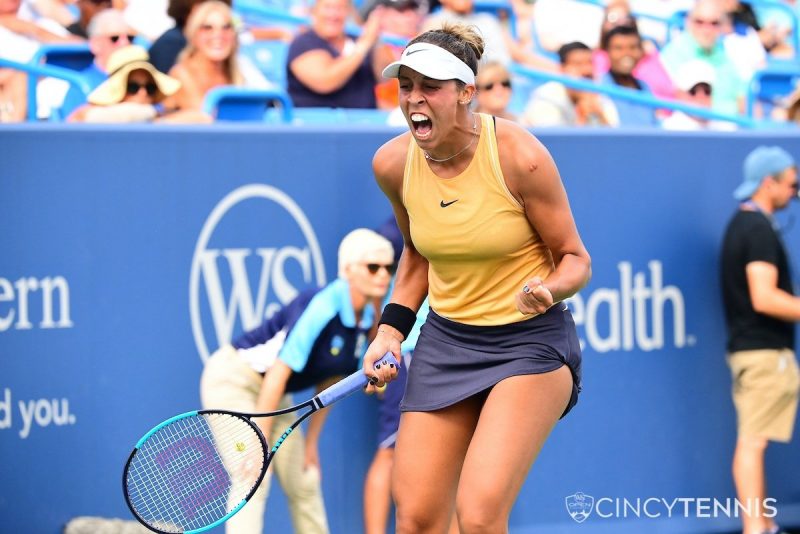 Madison Keys advanced to her ninth career final with an impressive 7-5 6-4 win over Sofia Kenin at the Western and Southern Open in Cincinnati.

The American, 24, has endured a patchy year on the WTA tour. But she found a rich vein of form in the early rounds to defeat Garbine Muguruza, Daria Kasatkina and Wimbledon champion Simona Halep.

And by the time Keys set about dispatching Venus Williams in straight sets in the quarter-final, she looked full of confidence.

The World No.18 started in similar fashion against Kenin. She dominated her first two service games and broke the younger American in the fourth game to establish a 3-1 lead. She then held off a couple of break points in game five to increase her advantage to 4-1.

But Kenin is a fighter and she had no intention of giving up on the set. She broke Keys in game nine to make it 5-4 and then saved two break points to level the score.

The older American did not panic. She held serve comfortably and then hit a couple of excellent winners to break the 20-year-old for the second time in the set and take it 7-5.

There were a few momentum swings in the second set. Keys held to love in the first game but dropped her serve during a sloppy third game. Kenin then consolidated the break with a comfortable hold.

In response, the World No.18 fired down three aces as she held serve to love in just 42 seconds. She then unleashed a stream of winners to break the younger American and level the score at 3-3.

Both women played superb return games as they traded breaks to move the score along to 4-4. Then Keys unleashed a series of ferocious groundstrokes to repel a break point and hold for 5-4.

After an intense conversation with her father at the changeover, Kenin looked a bit subdued in game ten. She sent down a weak second serve on the second point which was punished by a backhand winner from the World No.18.

The 20-year-old made a double-fault to slip 15-30 behind. Then she came into the net and could only watch and admire as Keys guided a sublime backhand pass into the opposite service box for a winner that set up two match points.

The World No.18 did not have to wait long to celebrate victory, as an unforced error from Kenin on the next point sealed her win.

Keys will play Svetlana Kuznetsova in the final. The Russian continued her impressive week with an eye-catching 6-2 6-4 win over World No.2 Ashleigh Barty.

“I’m very happy to be in the final,” the American said. “Sveta has been playing incredibly well. She is a craftier player with a little bit of everything. It will be a pretty difficult match but I’m looking forward to it.”