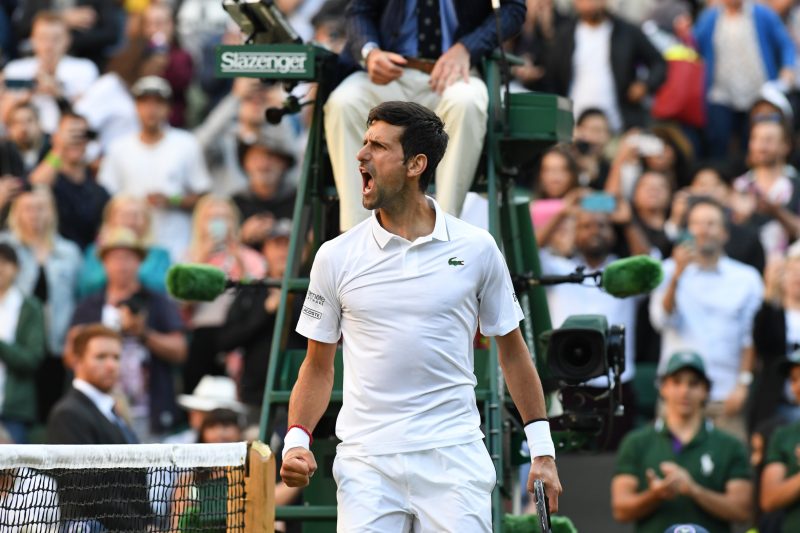 WIMBLEDON: A player with a record 20 grand slam titles to his name is something Novak Djokovic admires, but he is by no means scared of him.

The world No.1 will face Roger Federer on Sunday for a chance to win his fifth Wimbledon title and second in a row. It will be the first time the two have clashed this season. In 2018 Djokovic won both of their meetings, which took place on a hard court. On the grass, they have already locked horns at Wimbledon on three previous occasions with the Serbian winning their two most recent matches in 2014 and 2015.

“We all know how good he is anywhere, but especially here (in Wimbledon).” Said Djokovic.
“This surface complements his game very much. He loves to play very fast. Takes away the time from his opponent. Just doesn’t give you any same looks. He just rushes you to everything.’
“So for players, maybe like Nadal or myself that like to have a little more time, it’s a constant pressure that you have to deal with.”

Djokovic has reached the final in four out of the past five grand slam tournaments. The only player to have defeated him so far within that time period was Dominic Thiem at the French Open. An impressive resume for the 32-year-old who currently has 15 major trophies to his name.

Sunday’s final will be the 48th time the two have faced each other on the tour with Djokovic winning 25 of those. Speaking about their rivalry following his win over Rafael Nadal, Federer said he was ‘excited’ for the showdown. The Swiss could achieve two milestones if he wins the Wimbledon title. He would become the first man in history to win the tournament for a ninth time and it will return him back to No.2 in the world rankings.

“I’m excited about the game against Novak.” He previewed. “We’ve played each other so, so much. I don’t mind that, I think it’s more of a clear game plan. Especially we had a great match against each other in Paris (2018 Bercy Masters) recently. I hope we can back it up from there.”

It remains to be seen how the reception will be for Djokovic. During his semi-final match against Spain’s Roberto Bautista Agut, it appeared at times that there was more support for the underdog. Something that isn’t too unusual when it comes to the world of sport. Although he does have a mixed experience when it comes to the crowd. In 2018 he said he ‘didn’t deserve to be treated’ the way he was during his clash with home player Kyle Edmund. An encounter marred by a bad call that cost him a break, before he went on to win.

Some may perceive the final as a battle of which player is the most popular at The All England Club. An intriguing idea, but not one Djokovic has any time for.

“I’m going to go out there and fight and give it all. It’s finals of Wimbledon. This is the kind of a match that I always dreamt of as a young boy with the tennis racquet, dreamt of being part of. This is what I worked for. I wanted to be in this position.” He stated.
“I have a chance to fight for a trophy. Regardless of who’s across the net or what is happening around, I’ll definitely give it all.”
“I’ve played with Roger in some epic finals here a couple of years in a row, so I know what to expect,” Djokovic added.

Since 2015, Djokovic has won eight out of the 10 grand slam finals he has contested. His only loss to Federer in a major final was at the 2007 US Open final.

The Wimbledon final will get underway at 14:00 GMT on Sunday.