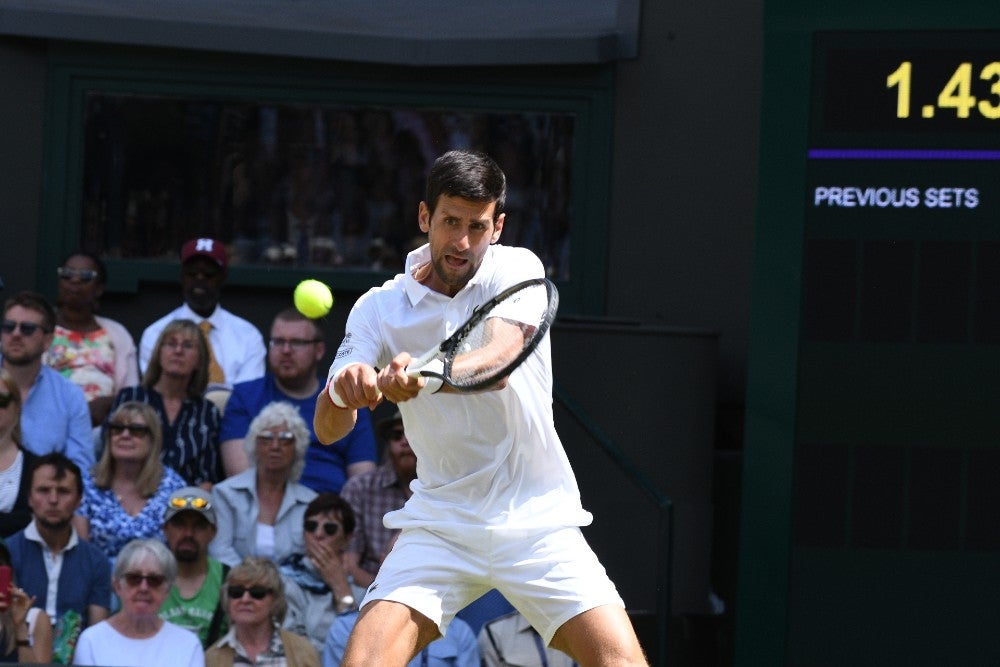 WIMBLEDON: Novak Djokovic is a win away from his fifth Wimbledon title after fighting his way past Spain’s Roberto Bautista Agut 6-2, 4-6, 6-3. 6-2, in their semi-final clash on Friday.

The world No.1 was issued with a stern test on route to his 25th grand slam final. The third highest amount of all-time. Bautiata Agut’s ability to match his pace was something that drew outbursts of anger from Djokovic during what was a at times thrilling encounter at The All England Club. In total Djokovic hit 42 winners to 29 unforced errors and more importantly saved four out of the five break points he faced.

“I had to dig deep. Of course, it was the semi-finals (of a grand slam) and Roberto was playing in his first. Regardless of that, he was not overwhelmed by the stadium or occasion. He played really well.” Djokovic told BBC TV.
“During the first set, he was probably still managing his nerves and making some uncharacteristic unforced errors. Then at the start of the second, he established himself and started to play better.’
“I’m glad it went my way.”

Whilst he is yet to crack the top 10, Bautista Agut had been a player of nightmares for Djokovic in 2019. Suffering two losses to the Spaniard in Doha and Miami. Nevertheless, on the green grass at Wimbledon, the world No.1 was eager to get his revenge as he got off to a rapid start. Dismantling Bautista Agut’s opening service game on route to a 3-0 lead. Laying down the mark early on, the top seed continued to boss his rival around the court, who was allowed to only display glimmers of his true talent. Cruising to a 5-2 lead, Djokovic clinched the opener on his first set point. Returning a 119 mph Bautista Agut serve that fazed the Spaniard as he ended up hitting a forehand shank.

Despite the dream start, Djokovic was by no means out of danger. At the start of the second set, Bautista Agut started to regain his footing with the help of a break in his favor. Prompting huge roar around the center court from the crowd, who were seeking a competitive clash. Reminiscent of their three previous grand slam meetings, the world no.22 went on to take a set off the top seed. Doing so with a forehand shot the brushed the top on the next before landing on the other side. Prompting disbelief on Djokovic’s face as more cheers erupted. The key aspect of the comeback was Bautista Agut’s ability to win 93% of his first service points.

With his back against the wall, the mood of the 15-time grand slam champion was one of frustration. Bemused by the fact he was unable to come up with a solution to tame the threat he faced. Fighting hard, Djokovic eventually restored order in his favor. Engaging in marathon baseline exchanges, a smash at the net enabled him to break for a 4-2 lead in the third. Prompting him to let out an almighty roar and fist pump towards his encourage watching as he rallied towards the two-set lead.

Edging towards a place in his sixth Wimbledon final, Djokovic continued to wear down his rival. His next breakthrough occurred three games into the fourth set when a backhand from the 23rd seed drifted long. Gifting Djokovic another break as he strolled to a game away from victory. It would be on his fifth match point when he prevailed after hitting a serve down the middle which Bautista Agut returned into the net.

“This has been the dream tournament for me ever since I was a child.” The four-time champion reflected. “So to be in the final is a dream come true. Regardless of the history and the many grand slam finals I have played, Wimbledon is something different.”

Djokovic will play either Roger Federer or Rafael Nadal in the final. Making it the 22nd time he has taken one of those players in the final stage of a major tournament.

“I’m a fan of that match-up. Federer and Nadal are one of the most epic rivalries of all time. It will be good to see them play.” He concluded.

Djokovic has now won 12 out of 13 grand slam semi-finals playing during his career. His only loss was to Dominic Thiem at the French Open earlier this year.

Federer And Nadal: Their History In 40 Photos