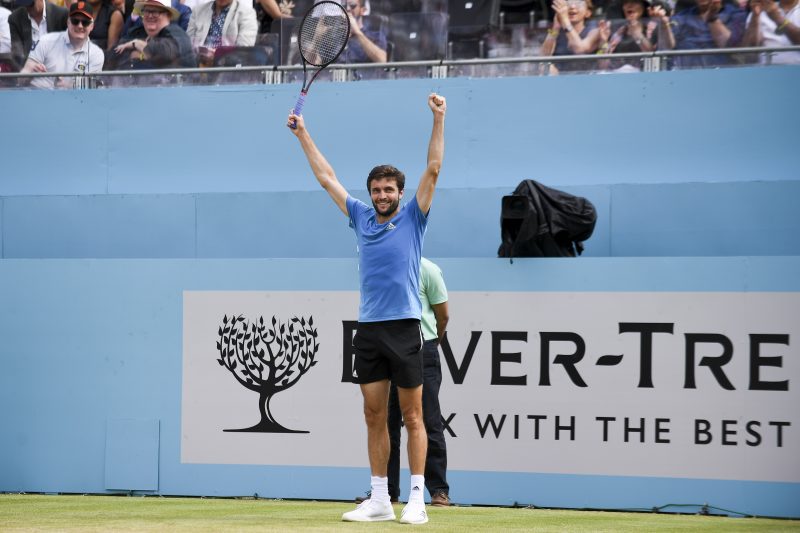 LONDON: French underdog Gilles Simon has secured a place in his first ATP grass-court final for six years after downing a wilting Daniil Medvedev in a three-set epic.

Simon, who is a former Wimbledon quarter-finalist, valiantly came back from the brink to knock out the fourth seed 6-7(4), 6-4,6-3, in what was a marathon encounter at The Queen’s Club. Featuring gut-busting rallies lasting 30 shots and more, as well as some injury drama concerning Medvedev.

“It was a really, really good performance today with the fatigue from the match yesterday, a lot of tension, and I found a good rhythm. I was hitting the ball well. I had good ball control on both sides.” Simon said during his press conference.
“It was pretty intense, but I found a good rhythm and I was able to hold it until the end, even if it was, like, really, really difficult. But, yeah, that was enough.”

The 34-year-old Frenchman appeared to be unaffected by the events that took place on the previous day. Taking on compatriot Nicolas Mahut, Simon engaged in the longest match to take place at the tournament since the ATP starting keeping records back in 19991. Battling it out on the court for three hours and 21 minutes.

On Saturday little separated the two players throughout their encounter at The Queen’s Club. In the first set, an early exchange of breaks saw the momentum switch between the two. Simon’s use of slice frustrated his Russian rival, who relied on his speedy serve to get him out of some difficult situations.

Eventually, Medvedev secured the breakthrough he was looking for during the early stages of the tiebreak. A four-point winning streak, which was aided by a duo of Simon mistakes, elevated him to a 4-0 lead. Weathering the storm, the margin was enough to gift him the opening set, which he closed out with the help of a forehand down the line.

Despite being in the lead, victory was far from certain during what was a tiring encounter. The inability to get away from Simon infuriated Medvedev, who displayed moments of frustration and stern glares towards his team watching from the sidelines.

Two games away from exiting this year’s championships, Simon hit back at the most crucial moment. Leading the second frame 5-4, he once again dismantled the Medvedev serve to suddenly revive his chances of the win and force the proceedings into a decider.

As the momentum changed, more drama erupted towards the business end of the semi-final as Medvedev appeared to be in discomfort. Throughout the match, he was seen putting ice on his shoulder during changeovers. However, it was the back that was the most problematic. Forcing him to bend over sharply and even at one stage collapsing onto the ground. Prompting a worried look from his team.

“You have this tendency to stop every time you play a good shot and you hope, oh, okay, it was enough, he cannot do it anymore.” The world No.38 explained when asked how he kept his focused.
“So you just have to focus on what you are doing and not watch on the other side.”

Medvedev’s misfortunes failed to have any impact on Simon’s concentration as he rallied towards victory. Leading 4-3, a cross-court winner from the Frenchman rewarded him another two break points for the chance to serve the match out. Something that was handed to him after a double fault from Medvedev. It would also be another Medvedev error which secured him the victory after the Russian hit the ball beyond the baseline.

Simon in the first Frenchman to reach the final at Queen’s since Jo-Wilfried Tsonga back in 2011. Should he win the title, he would become the first from his country to do so in the Open Era.

“It’s a difficult tournament to win. You see the names from the past champions. You realize how hard it is and the quality of the players who were able to win this tournament.” Simon concluded.