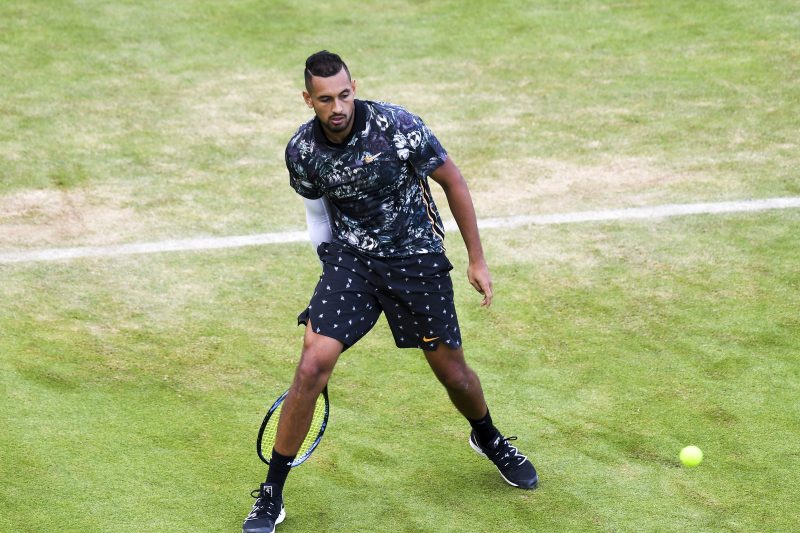 Nick Kyrgios’ antics on the courts are one that confuses John McEnroe, but the former world No.1 believes the Australian still has a place at the top of the men’s game.

The world No.39 exit the Fever-Tree championships under a cloud of controversy. During his first round match, he slammed officials at the tournament over some questionable line calling. Expressing frustration that there was no hawk-eye system on the outside courts at Queen’s. Then during his second round clash with Felix Auger-Alissime, Kyrgios was accused of tanking towards the closing stages and threw his racket out of the court of the end of the match.

As a consequence of his actions, the two-time grand slam quarter-finalist was issued with three separate fines for unsportsmanlike conduct. Amounting to a total of $17,500. Although the 24-year-old emphatically said he wasn’t bothered by any penalty during his post-match press conference as he questioned the quality of officiating that took place at Queen’s.

McEnroe, who was known for his temperamental temper during his playing days, believes Kyrgios still has a lot of value to add to the ATP Tour. The Australian has won three titles so far in his career on the pro tour and has been ranked as high as 13th in the world.

“He brings an electricity to tennis. That’s why everyone is trying to figure a way to work through this so he can get to a place where he can go out and feel free to compete and give the effort,” McEnroe told reporters on Friday.

Whilst speaking optimistically about Kyrgios, McEnroe didn’t hold back when criticizing one area of his on-court behavior, which was tanking. An offense he has been accused of doing numerous times throughout his career. As well as throwing a chair on the court during one of his matches at the Italian Open in May.

“That’s the part that gnaws at the players. I don’t care if he throws a chair on the court or does what he does,” he said.
“The part that I have a problem with, and I am assuming 99 percent of the rest of the Tour do, is when you go out there and don’t seem like you are giving an effort half of the time for whatever reason — I don’t know why, I am not Sigmund Freud!”

Not afraid to share his own opinion, Kyrgios’ words has also raised eyebrows on the court. During a podcast with No Challenges Remaining (NCR) he openly hit out at Novak Djokovic and Rafael Nadal. Branding’s Djokovic’s post-match celebrations as ‘cringe-worthy’ and describing Nadal as a ‘salty’ loser.

Regarding the comments about the world No.1, McEnroe has branded them as unnecessary. Swiftly pointing out Djokovic’s achievements in the sport.

“He doesn’t need to say what he said about Novak in this podcast,” the 60-year-old commented.
“If you say Novak, he’s too busy waving to the crowd, is that the best you can come up with?
“I mean come on! Doesn’t he deserve it since he has won 15 Slams? He can do whatever the hell he wants.”

Kyrgios has a win-loss record of 11-9 so far this season heading into Wimbledon.