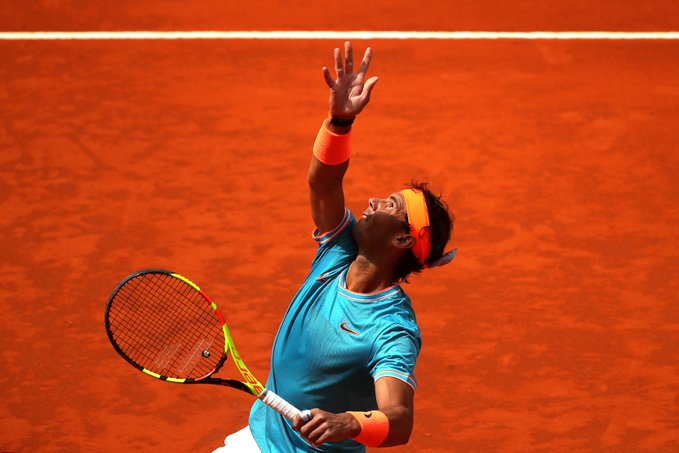 Rafael Nadal eased past Felix Auger-Aliassime 6-3 6-3 to reach the last 16 in Madrid and set up a clash with Frances Tiafoe.

The five-time champion had too much experience and power for the talented Canadian as he moved into the third round in Madrid.

An erratic forehand cost Auger-Aliassime as he continues his march at the ATP ranking and looks to secure a seeding at Roland Garros next month.

In the next round Nadal will face Frances Tiafoe after the American edged Philipp Kohlschreiber 6-4 3-6 6-3 to ensure back-to-back victories this week.

Both men looked to gain confidence early on as they were playing each other for the first time. The 18 year-old looked to settle down quickly against one of the all-time greats while Nadal was looking for a fast start after picking up a virus in the last week.

Some early power saw the world number 30 announce himself to Nadal as he looked to dictate from the back of the court, while Nadal used his topspin forehand to good effect.

However one key word that will be associated with today’s match is experience and that just proved to be the difference today as Nadal forced the issue on the big points.

It’s experience that the Canadian hasn’t gained yet that proved to be his downfall in the eighth game as he missed some fairly routine forehands.

These forehands didn’t just miss, they were well wide of its attempted destination as five points in a row saw the first break of the match.

A pumped up Nadal served out the opening set in 42 minutes as he looked to completely change the momentum of the match in his favour.

There were more signs of inexperience at the start of the second set as the Canadian youngster was mistiming everything as Nadal turned more aggressive.

The early break gave the world number two a foundation to build on as he looked comfortable on his serve as he used good variety.

Unlike recent weeks, Nadal’s footwork was clinical and precise as he transitioned into his shots nicely making Auger-Aliassime work hard.

Although the Canadian brought some good power to his forehand with good success at times, Nadal just had too much craft for the world number 30.

Another break saw the Spaniard within touching distance of the third round and despite the Canadian getting the break back, the five-time champion sealed the win with another forehand error from his inexperienced opponent.

Despite his viral illness, Nadal’s bid for a sixth Madrid title is very much alive as he takes on Frances Tiafoe in another challenging match on Thursday.

‘Give Him A Little Break’ – Rivals Djokovic, Nadal Rally Around Alexander Zverev