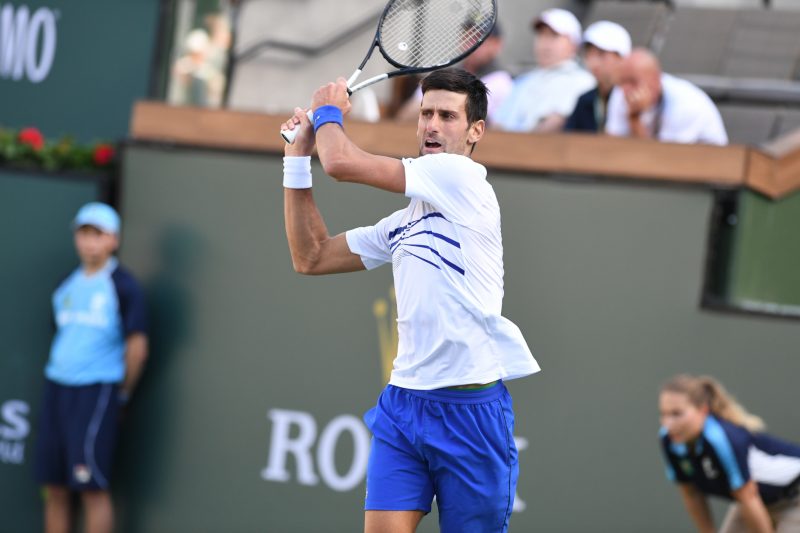 Top seed Novak Djokovic has secured his 44th main draw win at the Miami Open after downing  Argentine world No.83 Federico Delbonis 7-5, 4-6, 6-1, in the third round on Sunday.

The world No.1 came through what was a challenging encounter on the Stadium court. Besides the spirited play from an inspired Delbonis, the Serbian also expressed unhappiness with the conditions. Voicing frustration at why the lights weren’t turned on as day turned into night. On top of that, he was also bemused by some questionable line calls. Nevertheless, he prevailed by hitting a winner-error ratio of 12-19.

“I thought I started well at 5-2, then I had a couple of really bad service games that got him (Delbonis) back into the match.” Djokovic reflected during an interview with Amazon Prime.
“Again at 7-5, 3-1, serving with new balls I was playing too passively. Credit to him for swinging through the ball from the back of the court.’
“He was dictating the play. I backed up, I was too passive.”

Seeking a record seventh title in Miami, Djokovic didn’t have it all his own way. After easing to a 5-2 lead with a very business-like display, the world No.1 came under a barrage of world-class shots from across the court. Delbonis, who has previously scored wins over Roger Federer and Andy Murray, hit a series of sensational shots to draw level at 5-5. However, the Argentine was unable to sustain such a high-level of play against a player of Djokovic’s calibre. In the end it was an error-stricken Delbonis game that gifted the top seed the 7-5 lead.

In the lead, it was evident that perfectionist Djokovic wasn’t entirely happy with his performance. Emulating the opening set, in the second he saw a break advantage come and go. This time however, Djokovic’s temper  got the better of his as he smashed up his racket. Resulting in the umpire issuing him with a code violation.

Djokovic’s mood deteriorated further as the underdog broke once more, capitalising on a double fault from the top seed to move ahead 4-3 in the second set. The 15-time grand slam champion continued to fight, but he was denied the opportunity to dictate the points. Resulting in Delbonis snatching the second set to take proceedings into a decider.

Facing the prospect of a shock defeat, danger was eventually averted as the expense of a sluggish service game from Delbonis that guided Djokovic to a 4-1 lead. Unlike earlier in the match, he refused to relinquish his stronghold. Storming to the win against his rapidly tiring opponent.

“I was nervous towards the end of the second set.” The six-time champion admitted afterwards. “The first couple of games at the start of the third was crucial I think. Managing to hold, putting myself in front (during the match), added slightly more pressure on him. The last four games was the best of the match.”

Djokovic now has a shot of revenge in his fourth round match against Roberto Bautista Agut on Tuesday. The player who defeated him at the Doha Open earlier this year.  The Spaniard booked his place in the last 16 following a 6-4, 6-4, win over Fabio Fognini earlier in the day.

“He’s in great form and a completely different player from Delbonis.” Djokovic said of Bautista Agut. “Plays really flat, doesn’t give you many unforced errors. He’s really fit and runs around the court really nicely from both sides.”
“I’m looking forward to it. Obviously I got to play better than tonight and hopefully I can have a win.” He added.

In their head-to-head, Djokovic leads 7-2.

Praised By Federer, Felix Auger-Aliassime Cracks The Top 50 At The Age Of 18