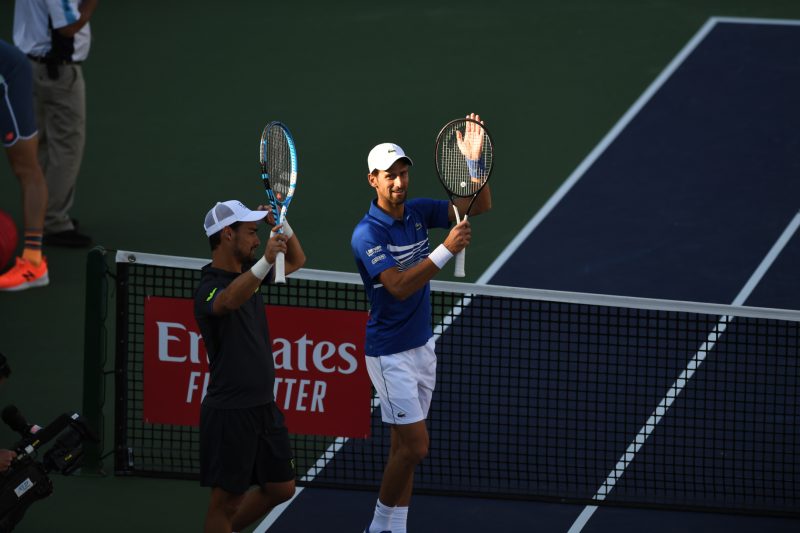 Novak Djokovic didn’t have much time to dwell on his shock exit from the BNP Paribas Open. In fact, he had less than two hours to cool down, recover and return back to the court.

On Tuesday the world No.1 slumped to a shock 6-3, 6-4, loss to world No.39 Philipp Kohlschreiber. The lowest ranked player to have got the better of him since Marco Cecchinato at the 2018 French Open. Whilst it was certainly a bad day at the office for a player who has dominated the men’s tour in recent months, he is also able to see the bigger perspective with the help of his participation in the doubles draw this week.

“I had to get over it in an hour, because I played doubles.” Said Djokovic. “I must admit I was thinking about it (the loss). When I hit a good return, I was wondering why this didn’t happen in singles. But it is, I guess, part of the world that we are, the world of tennis. It’s part of our world, and we just have to bounce back very quickly.”

Djokovic has teamed up with Fabio Fognini this week. He has a very modest record in the doubles in his career with prize money earnings of just under $350,000. A stark contrast to his singles tally of more than $110 million. Djokovic and Fognini have progressed to the semi-finals after defeating two-time grand slam champions Horia Tecau and Jean-Julien Rojer on Tuesday evening.

“I love playing doubles. I don’t play often. I play a few times a year. So these are the rare occasions where I could potentially do well.” Said Djokovic.
“It’s obviously very different from singles. Playing doubles, everything happens really quickly. Not easy mentally to kind of refresh your mindset and concentration and get the right intensity on the court so quickly after a disappointing loss in singles.”
“I’m happy that we managed to pull that one through. We beat very experienced doubles.” He added.

For Djokovic specifically, the run with Fognini also serves as a opportunity for him to get redemption in the Californian desert.

“It’s good for me that I’m participating in doubles here, because I get a chance to rectify the wrongs, if you want, but I don’t think it’s going to sit with me too long. I really — I don’t feel how this can, you know, disturb me on the long run. You know, I know what I’m capable of. I know the quality of my tennis.”

Indian Wells is one of the few tournaments on the men’s tour with the star players play in both draws. Besides Djokovic, Alexander Zverev, Stan Wawrinka, Stefanos Tsitsipas and Dominic Thiem have also done the double.

Whilst admitting that it is hard to force the top players on the men’s tour to play in doubles, Djokovic believes the discipline is getting recognised more than in the past. However, there remain big differences. The doubles champion in Indian Wells this year will win $439,350. A $901,510 decrease on what the singles champion will walk away with. Despite the differences in prize money, the ranking points are the same.

“I think doubles, in general in the last six, seven years, have gotten to a higher level of recognition.” The world No.1 stated. “I think in the last 10 years we have seen a great improvement and transformation of the doubles on the tour in a positive way. The tournaments are respecting doubles players more and encouraging top singles players to play doubles more. So that’s good. That’s positive. We need doubles, for sure.“

Should Djokovic triumph with Fognini this week, it would be only his second ATP titles in the doubles and first since 2010 at The Queen’s Club in London. A somewhat reasonable consolation prize for the 31-year-old after his latest loss.

Trio Responsible For Removal Of Chris Kermode Reacts To Backlash