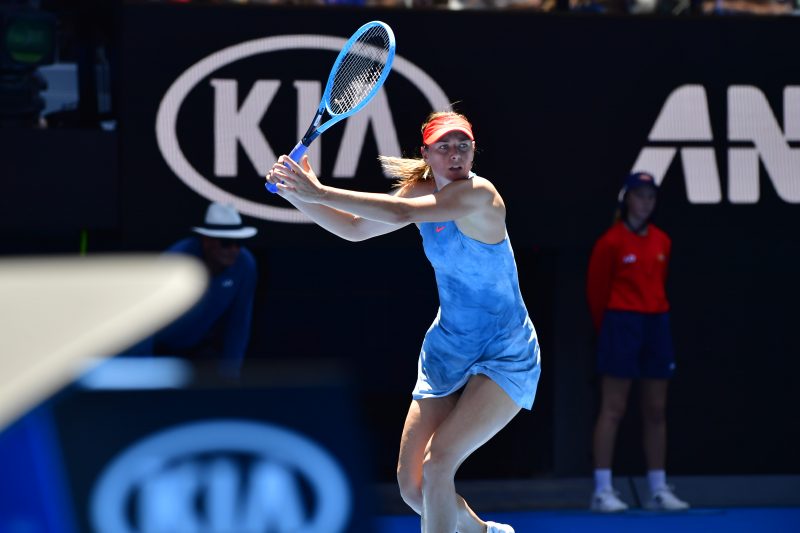 After an emphatic start to the Australian Open that didn’t see her lost a single game, Maria Sharapova has called out male players over their attitude towards their female counterparts.

The former world No.1 told reporters during her press conference that it has been ‘tough’ to gain respect from the players on the ATP Tour in recent years. Although Sharapova was keen to point out that some players have been more welcoming than others. Her comments coincides with the near retirement of three-time grand slam champion Andy Murray. Murray is known for his vocal support for women’s rights and was one of the few top players on the ATP Tour to have a female coach (Amelie Mauresmo).

“Relatively speaking, I think they (men) have been really tough, especially when it came to equality, as a general point.” Said Sharapova.
“Sitting at a press conference in Wimbledon five, seven years ago, there was not a lot of warmth coming from that side or that perspective. That’s tough.’
“I think there is definitely a few exceptions in the game, and I’m sure that he’s (Murray) been one of them.”

There has long been a debate about gender equality in tennis, which has substantially improved over the past 30 years. Equal prize money has been available at every grand slam since the 2007 Wimbledon Championships. Although, Sharapova believes there is more to needed to be done.

“I hope so. That’s what we aspire to get to.” She replied when asked if the situation will get better in the future.

Murray’s decision to walk away from the sport is related to his troublesome hip, which was operated on 12 months ago. Sharapova herself has also experienced injury setbacks over the years. Ending her 2018 season early due to a shoulder problem. Reflecting on her win over Boulter, the world No.30 said it was a ‘good test’ for both her shoulder and leg.

“I think injuries are just part of the sport.” The five-time grand slam champion explained.
“I can only understand it (Murray’s decision) from the perspective of my shoulder, because that’s something that I have had to deal with since I was 21 years old and really at the peak of my career, kind of came unexpected.’
“And here I am about 10 years later kind of going through very similar struggles, not on the depth that I was then with the tear of a tendon. But you realize that you’re not immortal, you’re never going to play this forever, even though we have done it as long as we can think of.”

While she is currently winning her own battle against injury, Sharapova is eager for a deep run in the Australian Open. She will take on Sweden’s Rebecca Peterson in the second round followed by a potential clash with defending champion Caroline Wozniacki.

“My next one (opponent) is someone I have never played against before. So that’s kind of tricky and a challenge.” She commented about playing Peterson.
“My coach is Swedish. I don’t know if that will maybe help me a little bit more.”

Caroline Wozniacki, Ashleigh Barty and Petra Kvitova get through to the second round at the Australian

Maria Sharapova Leads The Way As Seeds Breeze Through First Round

Elena Rybakina scores her 20th match of the season in Doha

Elena Rybakina came back one set down to beat Sorana Cristea 3-6 6-3 6-1 to score her 20th match win of the season at the Qatar Total Open just two days after losing to Simona Halep in Dubai.

Rybakina has improved her seasonal record to 20 wins to 4 defeats this season. The Kazakh player won the Hobart International and reached three finals in Shenzhen, St. Petersburg and Dubai.

“I still have energy. I am just fighting in every match. Hopefully I can can keep making finals and finally win another. It’s my first time here, and it’s a really nice place. Hopefully I will have time to walk around, but I am enjoying Doha so far”, said Rybakina.

US teenager Amanda Anisimova cruised past last year’s semifinalist Elina Svitolina 6-3 6-3 to reach the third round at the Qatar Total Open in Doha.

Anisimova hit 27 winners to 31 unforced errors and fended off all three break points she faced.

Anisimova saved two break points in the third game of the first set. The US player earned the only break of the first set and held on her serve to seal the opening set on her second set point.

Anisimova converted her fourth break point at deuce to take a 3-2 lead. Svitolina earned two game points as she served to stay in the match, but Anisimova won three consecutive points to clinch the second set with her second break.

“I think the most important thing was just staying focused and clearing my head, just not putting too much pressure on myself and just trying to enjoy. I love playing here. I love this stadium and the crowd is great. I am glad I get to see everyone again in the next round”,said Ansimova.