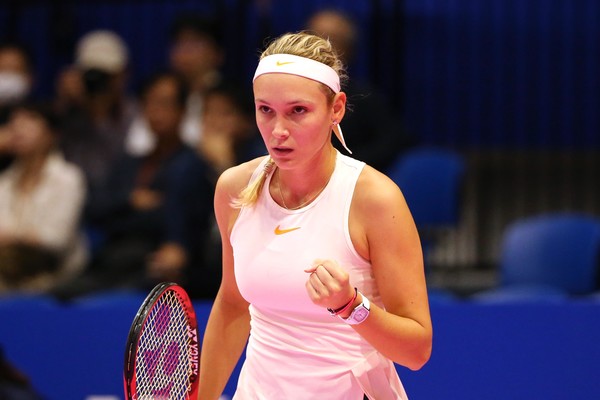 Donna Vekic is unsure that the rising stars of the women’s game are at a level of consistency to dominate the tour despite three players under the age of 21 finishing in the top 15.

22-year-old Vekic has hailed the achievements of her younger rivals before pointing out that they are yet to maintain their form. Citing Latvia’s Jelena Ostapenko as an example. Ostapenko has only managed to win one title since her triumph at the 2017 French Open and only managed to reach one final on the tour this season.

“There are a lot [of 21-and-under players] in the top-20. There are a few of them winning, like Osaka and [Jelena] Ostapenko last year winning the Slams but you still don’t see it throughout the whole year,” Vekic told Sport 360.
“So for sure there are special moments like that, but can they have the consistency to be top-10, top-five the whole year? I’m not sure yet. But everyone can beat everyone at the moment and I think that’s what’s so good about women’s tennis right now, you don’t know who is going to win the tournament at the end whereas in men’s tennis it’s a little bit different.”

Naomi Osaka, Daria Kasatkina and Aryna Sabalenka are three players under the age of 21 who has ended the year in the world’s top 15. World No.4 Osaka has enjoyed the biggest success after winning the US Open in September. Since then, the Japanese player reached the final of the Japan Open and the semi-finals in Beijing. However, she lost all three of her round-robin matches at the WTA Finals. Kasatkina and Sabalanka have also won WTA titles in 2018.

Vekic’s comments are one that stems from experience. At the age of 17 she won her first tour trophy at the Malaysian Open, in what was the start of a roller coaster journey. She wouldn’t win her second title until three years later at the 2017 Nottingham Open. Meanwhile, she didn’t reach the fourth round of a major until this year’s Wimbledon Championships. Vekic made her grand slam debut at the 2013 Australian Open.

“There were lots of ups and downs. I was very good when I was very young and then I was struggling a little bit at 18, 19, but I feel like at 22 I’ve been through everything,” she reflected.
“I’ve been through the highs and through the lows and now I’ve matured a lot in the last couple of years and finally in the last two years I have some consistency throughout the year and this is really important to me because before when I used to play finals, I would lose first round the next couple of tournaments.”

The ability to find consistency in her game has elevated the Croat to a current ranking best of 34th in the world. Reaching the final of the Washington Open in July. Nevertheless, there is still room for improvement. Overall, Vekic has reached the quarter-finals or better at six out of 25 tournaments played this season.

Guiding Vekic on the tour is coach Torben Beltz. A German coach known best for guiding Angelique Kerber to her first two grand slam titles in 2016. The two have been working together for nearly 12 months.

Vekic will kick-off her new season at the Brisbane International during the first week of January.

Related Topics:Donna Vekic
Up Next

Felix Auger Aliassime: “The best moment of the year for me was the US Open”

Svetlana Kuznetsova To Miss Start Of 2019, Accuses The Media Of ‘Twisting’ Her Words