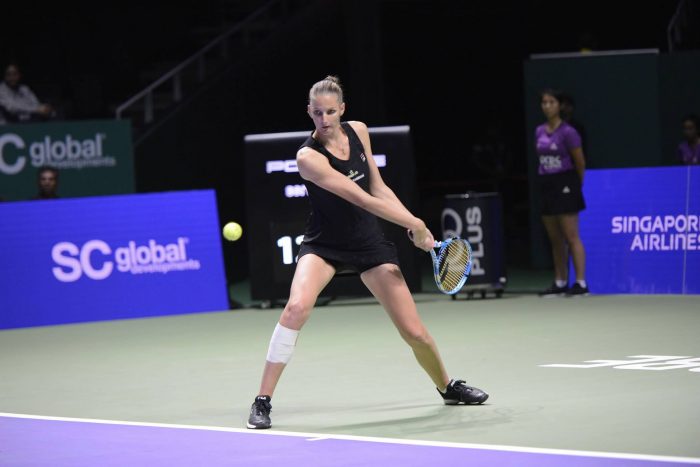 Seventh seed Karolina Pliskova has ended her losing streak against Petra Kvitova with a comprehensive 6-3, 6-4, win at the WTA Finals in Singapore. Knocking the two-time grand slam champion out of the competition.

Pliskova, who has reached the semifinals of the event for a second consecutive year, was the more consistent of the two players on the court. Kvitova’s hit and miss game played into the hands of the former US Open finalist almost instantly as she exerted her dominance early on. Taming the threat posed by an erratic Kvitova, who produced a total of 32 unforced errors.

“I think to stay positive because it is up and down in matches against her.” Pliskova said during an interview with BT Sport. “She can play great points, but also she can miss a lot.
“That was the case today, so I just stayed there, even in the second set where she was getting a little bit better, playing more aggressive.”

Prior to Thursday’s showdown in Singapore, two-time grand slam champion Kvitova boasted a 3-0 head-to-head record against her Fed Cup team mate. However, at the start of the match it was one-way traffic in Pliskova’s direction as she capitalized on Kvitova’s sub-par serving to race out to a 4-0 lead. Continuing to engage in a series of baseline rallies, Kvitova managed to retrieve one of the breaks to finally get back on the scoreboard, but the damage was already done in the first set. Enabling Pliskova to seal the 6-3 lead with the help of another error from her rival.

As a result of losing the first set, Kvitova was knocked out of the competition regardless of how the match concluded. Making it the third time she has failed to progress beyond the round robin stages in six appearances at the season-ending event. Nevertheless, the 28-year-old continued to fight on the court. Grabbing an early break on route to a 3-0 lead at the start of set two. Prompting Pliskova’s coach, Rennae Stubbs, to come on court with words of inspiration.

“Am I winning this set?”

Pliskova under pressure now as Kvitova has elevated and cleaned up her game.

Stubbs down for another chat.

Dodging the scare, Pliskova battled back to draw level at 4-4, moving two games away from victory. Shortly after her mini comeback, a decisive break was then made following another disastrous Kvitova service game that ended with a forehand sailing out of the court. Serving for her first ever win over Kvitova, Pliskova secured victory on her second match point opportunity with the help of another mistake from her rival.

“I knew I had to win to be in the semi-finals and that what I was thinking during the match.” Pliskova said afterwards.

As a result of the win, defending champion Caroline Wozniacki is now required to get a straight sets triumph in her next match in order to qualify for the semi-finals. Wozniacki will take on Elina Svitolina, who will qualify for the last four with a win.