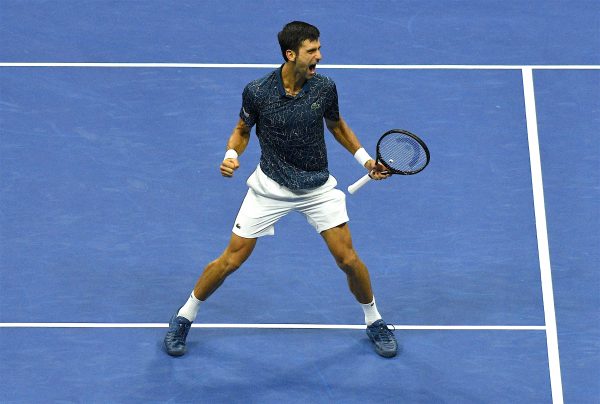 Novak Djokovic has clinched his 14th grand slam title following a pulsating 6-3, 7-6(4), 6-3, win over Juan Martin del Potro in the final of the US Open.

The former world No.1 was in clinical fashion against a player who dropped just one set on route to Sunday’s showdown. Djokovic’s defensive play combined with a clear game plan was reminiscent of his best tennis.  Illustrated by the 32 winners he produced throughout the encounter. Continuing a stunning run on the tour that has seen him lose only one match since June.

Heading into the match, Djokovic’s recent record against the Argentine has been flawless. Last year he defeated Del Potro in all three of their meetings to extend his overall head-to-head record to 14-4. Nevertheless, Del Potro’s thunderous forehand posed a danger as he was cheered on by his army of fans inside the Arthur Ashe stadium.

After a close start between both players, Djokovic pounced in the eighth game of the match.     His game plan of patiently waiting for his opponent to buckle during some lengthy rallies proved successful. Trailing 15-40, Djokovic valiantly battled back by winning five consecutive points to break for a 5-3 lead. Triggering a cheer from his entourage. Gaining in momentum, the Serbian went on to clinch his first set point with the help of a perfectly placed 104 mph serve out wide that was unsuccessfully returned. Before seizing the 6-3 lead at the expense of a Del Potro forehand slamming into the net.

The opener was a precursor to an electrifying 95-minute second set that delighted the New York crowd. Initially Djokovic looked destined to race towards the finish line after breaking for a 6-3, 3-1, lead. However, a fiery Del Potro powered his way back into the match with a three-game winning streak. To add to the drama, Djokovic was then forced to save a trio of break points during a marathon 20-minute service game to draw level at 4-4. During what was one of the most dramatic sets of the entire tournament, it was ironically Del Potro’s trusted forehand that was his undoing. Djokovic’s relentless defensive play drew three consecutive errors from his rival as he eventually seal the tiebreaker in his favour.

Closing in on his first US Open title since 2015, the roller coaster continued as both players exchanged breaks during the third frame. Nevertheless, Djokovic manoeuvred himself to a game away from victory after breaking once more for a 5-3 lead. Serving for the championships, he claimed glory with a smash at the net. Resulting in him collapsing onto the ground in jubilation.

Djokovic, who missed six months of the tour last year due to an elbow injury, has become the third most decorated grand slam champion in the history of men’s tennis. With 14 major titles to his name, he ties with his idol Pete Sampras.

The newly crowned New York champion continued with his tributes by praising Del Potro’s comeback to the tour. The 2009 champion has been hindered by wrist issues throughout his career and underwent four surgeries. At one point he contemplated retiring from the sport.

“I want to congratulate Juan Martin for what he has done through these years through all his problems, I know he’s going to be back here with the championship trophy.”  Djokovic concluded.

Djkovic has become only the eighth man in the Open Era to win both Wimbledon and the US Open titles within the same season.

Related Topics:2018 US OpenJuan Martin Del PotroNovak Djokovic
Up Next