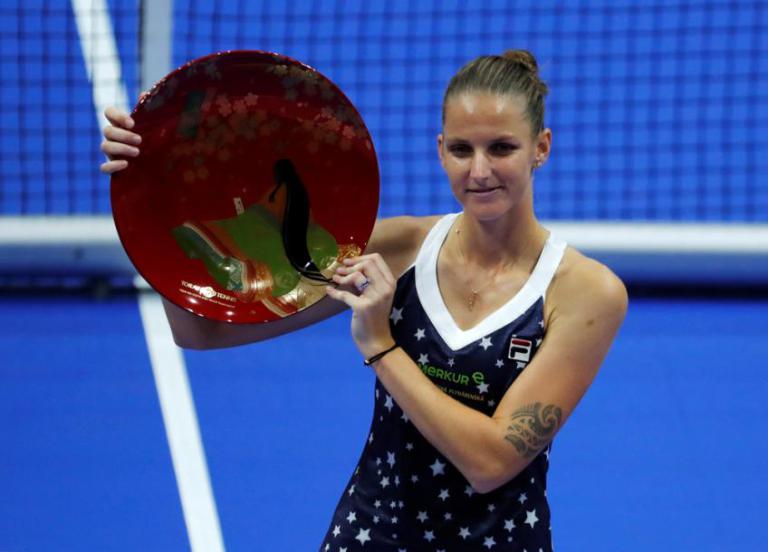 Fourth seed Karolina Pliskova has won her second Premier title of the year after upsetting an emotional Naomi Osaka in the final of the Pan Pacific Open in Tokyo.

The former world No.1 proved too strong against her weary opponent, who said to her coach that she was ‘so stressed out’ during one of the changeovers. Pliskova’s aggressive approach saw her hit 12 winners to 13 unforced errors as she didn’t face a single break point. In contrast US Open champion Osaka did produce more winners, but came undone with 26 unforced errors. Allowing the Czech to cruise to a straight sets victory as she closed the match out with an ace.

“I’m just happy it didn’t go to three sets,” Pliskova commented afterwards.
“My serve is my biggest weapon and it was key today.”
“Naomi was maybe a little bit tired, you could see that. But the future is bright for her and congrats to her for an incredible few weeks.”

Pliskova’s triumph in Tokyo is her first title won in Asia since the 2013 Malaysian Open when she defeated Bethanie Mattek-Sands to win her first trophy on the WTA Tour. This week she has had to come through a trio of three set matches amounting to 419 minutes on the court before facing Osaka on Sunday. Scoring wins over Daria Gavrilova, Alison Riske and Donna Vekic.

“This arena is just amazing, and I’ve had a lot of fun this week,” Pliskova said. “I’ve been coming to Japan for the last few years, and I hope to be back next year, as well.”

The win is very much a case of sweet revenge for Pliskova. Earlier this year in Indian Wells, she suffered a comprehensive defeat to her Japanese rival. She now leads their head-to-head 2-1.

Runner-up Osaka is set to take a mini break from the tour after losing her 10-match winning streak. She was bidding to become the first Japanese player to win the tournament since 1995. During her press conference, Osaka said she believed tiredness hampered her in the final.

“I’ve literally never felt more tired in my entire life,” she told reporters.
“The chances of me playing in the next tournament are very low.”

As a result of her latest win, Pliskova will move ahead of Osaka into seventh place on the WTA rankings when they are updated on Monday. She has now won 11 WTA titles in her career and two this season. Pliskova also won the Stuttgart Open in April.

Kiki Bertens sets up final against Ajla Tomljnovic in Seoul