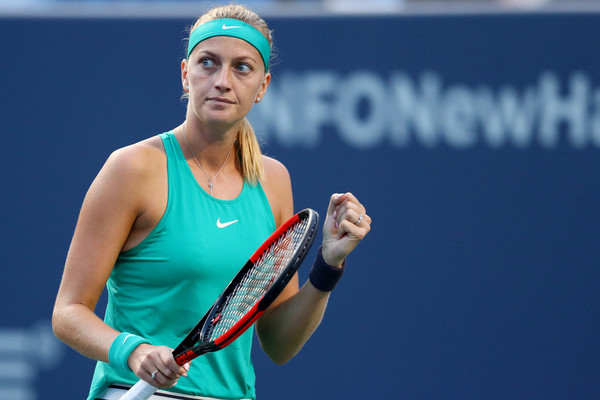 Petra Kvitova has suffered a setback in her preparations for the final grand slam of the season after being forced to retire from the Connecticut Open on Thursday.

The world No.5 was taking on Spain’s Carla Suarez Navarro in the quarter-finals, but retired after the first set due to a shoulder injury. Kvitova has been experiencing pain in her shoulder since her second round clash against Zarina Diyas. It is the first time the Czech has retired from a match on the tour since the 2016 Shenzhen Open in China.

“I just felt pain throughout the shoulder,” Kvitova told reporters during her press conference. “Already, yesterday (Wednesday) during the match, I started to feel it, and it didn’t get any better. I tried the first set, I tried to play, but overall, it wasn’t really going my way.”
“I couldn’t really serve as good as I wanted, the service speed wasn’t that high,” she continued. “I just tried, but when you’re playing someone like Carla, it’s just tough to play at I-don’t-know-how-many percent. If you’re not ready, it’s just tough.”

Kvitova’s injury issue occurs less than a week before the start of the US Open. She is seeded fifth in the draw and will be hoping to break her run of disappointing results in majors this year. At both the Australian Open and Wimbledon Kvitova crashed out in the first round. Meanwhile, at the French Open she managed to reach the third round.

“It was starting with fatigue. I have played a lot of matches over the past couple of days. In the end, it is pain as well.” She described her shoulder issue.
“I need some rest. I don’t know how many days or whatever I’m going to do. For sure, there will be some treatment as well.
“Hopefully I will be fine soon, but we (her team) don’t know.”

Kvitova is the most decorated singles player on the tour this season with five WTA titles. The two-time grand slam champion has won trophies in St. Petersburg, Doha, Prague, Madrid and Birmingham.

At the US Open, Kvitova is set to play Belgium’s Yanina Wickmayer in the first round.