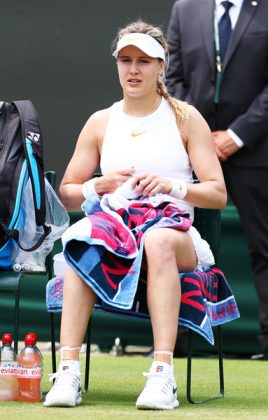 Former Wimbledon finalist, Eugenie Bouchard has praised the recent success of her doubles partner this week, Sloane Stephens as the Canadian prepares for her Coupe Rogers singles opener.

The Canadian was granted a singles and doubles wildcard this week in her hometown of Montreal after she has fallen to 129 in the world in singles. The 24 year old is playing doubles with US Open champion Sloane Stephens and in a recent interview with the WTA.com, she praised the American for her recent success, “She always had a lot of talent. She always had the potential of having the results she had recently,” Bouchard explained.

“I’ve known her since I was 11 or 12, half my life, I was sure it would happen someday because she has a big game and she’s so powerful. I knew, even when we were young, she would become on of the top players in the world.”

The Canadian-American duo won their opening round doubles match on Monday after taking out the fifth seeds, Gabriela Dabrowski and Yi-Fan Xu 6-4 4-6 10-6. After the match the Canadian emphasised the importance of doubles, especially considering her low confidence in singles, “The reason for playing doubles here is to be able to play more matches,” she explained. “It was an excellent thing to be able to be able to play that match today. It’s a lot better than a normal practice. I believe doubles are very good for that. They help you improve your volleys and returns. It can also help your singles game.”

The Canadian will play 14th seed and in-form, Elise Mertens on Tuesday afternoon in a bid to improve her ranking and build on some confidence as the WTA tour reaches the latter stages of the season.

Johanna Konta Takes Down Ostapenko At The Rogers Cup

Rogers Cup Tuesday Preview: The Men’s and Women’s Match of the Day