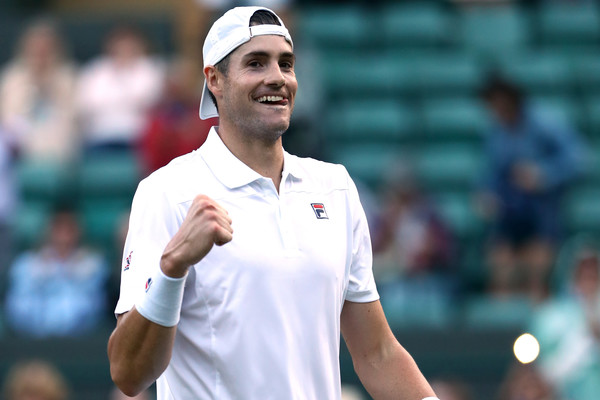 John Isner said he felt “elation” after his four-set victory over Milos Raonic in the Wimbledon quarter-finals on Wednesday, reaching the final four of a grand slam for the first time, let alone on the SW19 lawns.

“Very, very happy to be in this position right now in the semifinals. With how I’m feeling physically and mentally, I’m in a very good spot. I think I can keep doing damage here. This is amazing,” Isner said. “To do it here at Wimbledon makes it even a little bit more special.”

The 33-year-old finally broke through in his 10th Wimbledon and 41st grand slam. He had just one previous quarter-final at a major, seven years ago, and had never even reached Manic Monday in London. But after a poor start to his season, he stormed to the title in Miami and later reached the quarter-finals in Madrid.

After a sluggish Wimbledon start, including a near-collapse from two sets up against Ruben Bemelmans in the second round, the 6-foot-10 American found his top form and recovered from a set down to defeat Raonic.

Though he said he’s “definitely surprised to be in the semifinals,” Isner also contended that the conditions suit him particularly well.

“Physically I’ve felt awesome. The courts didn’t seem too fast,” he added. I felt in the past maybe they’ve felt a little bit too fast for me.”

The No. 9 seed, who will move to at least a career high of No. 8 next week, impressed on Wednesday with excellent net play. He had an especially strong sequence of volleys when Raonic had set point in the second set tiebreak. Isner lunged and jumped his way to the point, then went on to win that set and the subsequent two to make his breakthrough.

Asked about particular strengths in his play in London, Isner pointed to his serve-and-volley and net coverage.

Thanks to Kevin Anderson’s shock victory over Roger Federer, Isner faces a manageable path to the final. With 95 consecutive service holds and another huge server across the net, the American seems likely to contest a similar match on Friday.

If he continues his fine physical and mental play, he could take another big step forward.

“I’ve had some game plans in each match. I’ve executed them, I think, almost to perfection. In the big points, this whole tournament, I’ve been calm and collected and felt like I’ve played them well,” Isner said. “When I say ‘big points’ I’m talking about break points for me, which are essentially set points. I don’t care what juncture it is in the set, I’ve played those well and calm. I’ve played those the right way, and it’s paying off.”