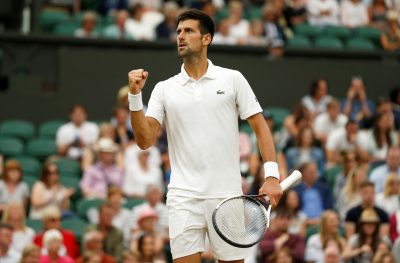 Former World No. 1 Andre Agassi, who is currently coaching 12-time Major winner Novak Djokovic, has claimed that the Serbian can return to the top of the men’s rankings.

Djokovic, who underwent a minor surgery on his troublesome elbow at the start of the month, has started his rehab and is expected to make his comeback after regaining full fitness sometime before the clay-court season in April.

Even though he has not yet withdrawn from the Indian Wells and the Miami Masters scheduled for next month, his father has revealed that he could be out of action for as long as 12 weeks.

Despite his prolonged absence from the ATP tour due to his troublesome elbow, his coach and winner of eight Grand Slam titles, Agassi has insisted that Djokovic is on the upward trajectory and can dethrone Roger Federer and Rafael Nadal from the summit of the official ATP rankings.

“He is intense about everything, including relaxing! He takes everything very seriously. Even when he chills out, he is determined to make the most of that time,” Agassi told Tennis365.

“I analyzed a lot on the tennis court and felt my way through life off the court. He is the exact opposite. The guy is really smart and it shocks you how much he remembers and the details.

“If he is looking for information, he reads, studies and takes so much in. It has been fun getting to know him and working out what makes him tick and to help him on his objectives.

“Some players find it hard to get back to the top when they have had a dip in form, but in Novak’s case, I think he can get back there. He is aged 30, but his body is still in the condition of a 25-year-old.

“He needs to find a few new solutions, it’s as simple as that. Tennis is a mix of mind, body and heart and there is a balance. You have to make sure more is going in than coming out.

“For a time, he was just so intense about what he was accomplishing, his goals and objectives. At some point, you are going to run into trouble sooner rather than later. Emotionally, physically, you will eventually pay the price.

“I think he is off that plane where he put himself under so much pressure and he is on an upward trajectory again and I think there are things for him to add to his game. He needs to think about it and that is what he is doing at the moment.

“His speed and range of motion with his body is amazing. His joints don’t look the same as other people.

“When he is getting ready, and he is very particular on his rituals before a match, you look at him and he is doing things the other guys just can’t do. You look at how other guys prepare and they are not even athletes compared to this guy.

“I see him lying on a table and clapping his elbows behind his head with his face down on a bench. When your body holds up and has that kind of speed and range, it puts you ahead of the rest.”