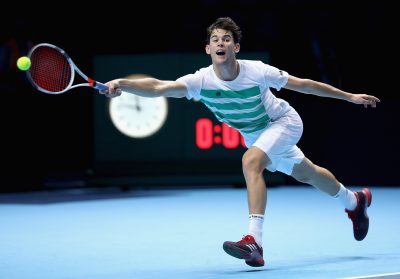 World No. 4 Dominic Thiem will square-off against two-time Grand Slam semi-finalist Grigor Dimitrov in the opening match of the Pete Sampras Group at the ATP World Tour Finals in London on Monday. Can Thiem come out on top of the equally talented Bulgarian who also possesses a potent one-handed backhand?

Dominic Thiem, alongside Alexander Zverev is considered as one of the future stars of the game and his rise to No. 4 in the ATP rankings has certainly substantiated that claim. In literal terms, the year 2017 has been his breakthrough year in terms of results. Thiem won the Rio Open in February, was the runner-up in Barcelona and Madrid and made it to the semis of Roland Garros and Rome.

Moreover, apart from the success he has achieved what makes Thiem a talking point among the sport’s elite is the way he plays the game. His playing style is extremely soothing to the eye, elegance is a hallmark of his ground-strokes and he barely hits a shot that looks ugly. In addition to that, his movement on the court is quite smooth and he never seemed to rush through his strokes.

Despite his beautiful all-round game, Thiem has completely gone off the boil in recent times. Since Wimbledon, he has accumulated an 8-9 win/loss record including an 0-3 streak during the Asian leg of the tour. His best results after Wimbledon have been a quarterfinal appearance in Cincinnati and a round of 16 showing at the US Open.

Dimitrov has followed a similar trajectory to Thiem as far as the season’s results are concerned. After winning titles in Brisbane and Sofia and reaching the semi-finals of the Australian Open, Maria Sharpova’s ex-boyfriend failed miserably during the clay court season as he barely managed to sneak past the round of 16.

But, he did latch on to the big opportunity he got in Cincinnati as he went on to win the title in the absence of Roger Federer and the early exit of Rafael Nadal. However, he disappointed a lot of people with his poor performance in New York as after his Cincinnati title run he was expected to do exceedingly well in the final Grand Slam of the year, but lost to Andrey Rublev in the 2nd round.

Grigor somehow managed to stem the tide after the US Open by getting through to the final of the Stockholm Open, and progressing through to the semis in Beijing before losing to eventual champion Nadal. Dimitrov lost in the third round of the Paris Masters but the loss came at the hands of John Isner and that too in the deciding set tie-breaker and it wouldn’t have hurt his confidence that much.

Head-to-head: The pair have met thrice before on the ATP tour with Thiem having a marginal advantage because of his 2-1 lead over the current World No. 6. However, there two recent meetings have been extremely close with Dimitrov winning in three fiercely fought sets in Brisbane and Thiem overcoming Dimitrov in a three-set thriller in round three of the Madrid Masters. Once again, we should expect a tight match with the more aggressive player having the last laugh.

Roger Federer, Marin Cilic And Others Debate Court Conditions At The ATP Finals