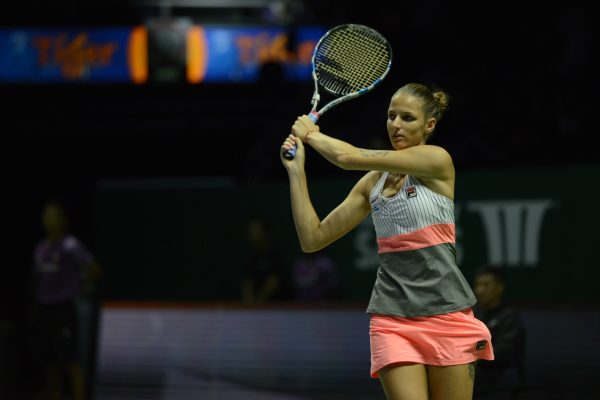 Former US Open finalist Karolina Pliskova has kicked-off her campaign at the WTA Finals in Singapore with an emphatic 6-2, 6-2, win over Venus Williams.

Playing in the year-end competition for the second consecutive year, Pliskova was set to face some stern resistance. Williams, who last played in the competition back in 2009, has reached two grand slam finals this season and had a head-to-head record against Pliskova of 1-1. In contrary to the statistics, the match was a one-sided encounter for the 25-year-old.

From the onset it was third seed Pliskova that dominated proceedings. Her game plan of returning Williams’ serves as soon as possible to apply the pressure rewarded her. In contrast, 37-year-old Williams struggled with her consistency on the court and appeared to bothered by her right hip after reaching to return a ball in the first game of the match.

“I think I was playing very solid, serving very well today. That was the main key of the game, so I was able to hold my service games, which is always good.” Pliskova told BT Sport.

Eleven minutes into the match, the Czech strolled to a 3-0 lead. In Williams’ opening service game she had a 40-15 lead, but failed to close it out. Eventually the American managed to work herself into the match with the help of some costly errors from her opponent. A double fault on break point reduced Pliskova’s lead to 3-2.

Despite the blip, the world No.3 soon regained control as Williams struggled to find her rhythm, hitting three double faults and nine unforced errors in the opening set. The erratic play enabled Pliskova to stroll to the 6-2 lead, converting her first set point after a Williams shot landed beyond the baseline.

An almost identical scenario occurred in the following set. Pliskova continued to be the aggressor and forced Williams into uncomfortable scenarios. After saving a duo of break points she faced, Pliskova eased to a set and 4-1 lead. Admirably Williams kept fighting, but it was too little too late. During the final game of the match, Pliskova raced to a 40-0 lead before Williams drew level with glimmers of her true ability. It was on the fourth match point when Pliskova triumphed after a Williams backhand went out.

“I was feeling much better than I was last year.” The world No.3 said about how she currently feels compared to 12 months ago. “I was enjoying myself on the court, which is important for me and I played good tennis.”

The surge in positivity is partly to do with a new collaboration with Australia’s Rennae Stubbs, who will guide her in Singapore. 46-year-old Stubbs is a former world No.1 doubles player.

“I was feeling amazing in my practice week here. We have had some fun on the court and off the court. I feel relaxed and I feel like I am enjoying myself. She made me do that, which is why I am playing so well.”

As she relishes in her win, questions are mounting over Williams’ current fitness. At the third oldest player in history to participate in the WTA Finals, the 37-year-old has only played one tournament since the US Open. Overall, she has played the fewest matches this season than any other player in Singapore and is the only one to not win a title.

“I mean that it is amazing that she is still playing at such a high level. I think she can play better in her next match.” Pliskova said about the seven-time grand slam champion.