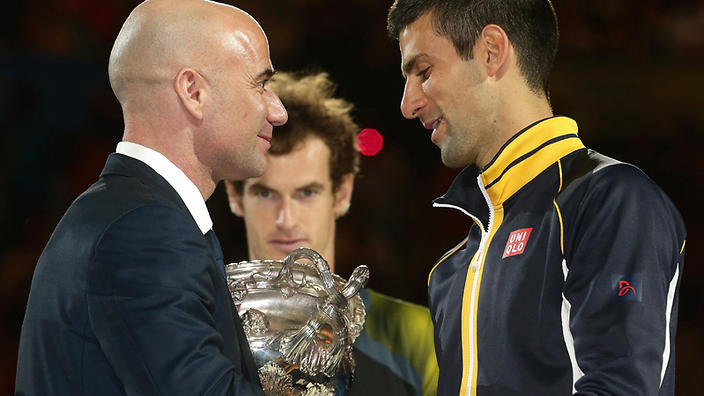 Novak Djokovic has confirmed that he will start working with former world No.1 Andre Agassi at the upcoming French Open.

Rumours of a potential partnership between the two circulated earlier in the week following a report published in The Telegraph newspaper.  Djokovic has been without a coach since the start of May after dismissing three members of his team. The move was triggered after the Serbian experienced a series of disappointing results on the tour where he failed to reach the final at four consecutive tournaments.

“I spoke to Andre the last couple weeks on the phone, and we decided to get together in Paris. So he’s gonna be there. We’ll see what future brings.” Djokovic said following his loss to Alexander Zverev at the Italian Open.

Agassi was one of a series of high profile players that Djokovic has spoken to. According to Italian media, he also approached Pete Sampras and Gustavo Kuerten. The two will work together only during part of the French Open. Agassi, who is also the husband of Steffi Graf, is unable to stay in Roland Garros for the full two weeks.

“We are both excited to work together and see where it takes us. We don’t have any long-term commitment.” The world No.2 explained. “It’s just us trying to get to know each other in Paris a little bit.”
“He will not stay the whole tournament. He’s gonna stay only to a certain time, and then we’ll see after that what’s gonna happen.”

Explaining his reasoning behind the new partnership, Djokovic revealed that it was his own respect for the America that influenced his decision. Agassi is an eight-time grand slam winner, becoming the first man in the Open Era to win four Australian Open titles. During his career, he won 60 ATP singles titles and spend 101 weeks as world No.1.

“Andre is someone that I have tremendous respect for as a person and as a player. He has been through everything that I’m going through. On the court he understands the game amazingly well.” He said.
“I am enjoying every conversation that I have with him. He’s a very humble man, is very educated in just, he’s a person that can contribute to my life on and off the court a lot.”

The two are yet to meet in person, discussing their plans via telephone over the past two-and-a-half weeks.

In recent times, Agassi has publicly praised the Serbian player. In 2016 he told CNN that Djokovic was ‘the favourite to win the US Open.’ Djokovic lost in the final at Flushing Meadows to Stan Wawrinka.

“Anybody that knows me knows that I think he should win everything all the time,” Agassi once said about Djokovic.  “That is how he separated himself from everybody.”

In January, the 47-year-old spoke out in defence of the world No.2 amid a slump in his results on the tour. Agassi compared Djokovic’s dip to the misfortunes he endured during his career, insisting that everybody has ‘their own unique journey.’

“We all have our own unique journey. I hit rock bottom over the course of two years and I can assure you Novak won’t have to learn in as hard a way as I had to learn but he still has time.” He said.
“He’s a heck of an athlete and in my opinion one of the greats of all time.”

Djokovic will be the defending champion and second seed in this year’s French Open, which will get underway a week today.