24 Years Ago Today: The Stabbing of Monica Seles - UBITENNIS 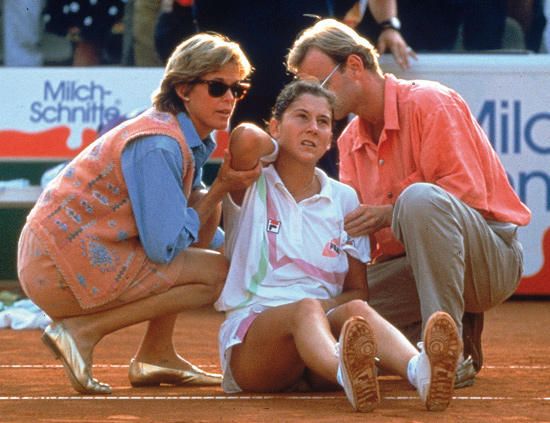 24 years ago today, the #1 woman in the world was sitting in her chair during a changeover when a man came onto the court and stabbed her from behind with a knife.

24 years later, it’s still hard to process the severity of the above sentence.

April 30, 1993 is one of the most tragic days in tennis history. 38-year-old Gunter Parche, described as a deranged Steffi Graf fan who was upset over Seles’ recent domination of her top German rival, stabbed Seles and narrowly missed her spinal cord and organs. He was subdued by officials and fans before being able to stab her again. Amazingly, only a few stitches were needed to treat the wound – but the harm done to Seles’ life and career was immeasurable.

Prior to the incident, Seles appeared to be headed toward GOAT-like numbers. Between January 1991 and February 1993, Seles reached the final in 33 of 34 tournaments she played, winning 22 of those titles. During this time, she went 55-1 in majors, winning 7 of 8 major titles. And all of this was accomplished before her 20th birthday. These numbers surpass anything we’ve seen from Serena, Federer, Nadal, or Djokovic at their peaks.

Following the stabbing, Seles would be absent from the court for over 2 years. In her 2009 autobiography, Seles detailed dealing with severe depression and an eating disorder. Her father’s cancer diagnosis later that year only added to her despair. Perhaps most upsetting was the dismissal of the attempted murder charge against Parche. The judge ruled Parche had diminished mental capacity, and he would serve no jail time. When a second judge upheld this verdict, Seles collapsed in tears in front of reporters.

Seles would never be the same player again, winning only 1 further major upon her return. The mental toughness and nerves of steel that had made her a dominating #1 in the world were gone. Her assailant’s mission was, horrifyingly, accomplished.

Seles had dominated her main rival, Steffi Graf, in the years prior to the attack. After herself winning 7 of 8 majors between 1988 and 1989, Graf would only win 1 major in each of the next 3 years. Within weeks of the attack, Graf would return to the #1 ranking. She would win the next 4 majors, with 11 of her 22 major titles coming after the stabbing, the third most all-time. We can only speculate how those numbers would differ had the stabbing never happened.

Has lessons been learnt?

24 years later, are players safer now? There’s certainly more security now at the bigger tournaments, with much tighter rules as to what is allowed on the grounds, but there’s also been several stunning security breaches in recent years. At the French Open in 2015, a young fan ran onto the court after Roger Federer’s second round win and walked alongside Federer for several seconds before being removed by security. Luckily this fan was looking to do nothing more offensive than take a selfie, but how is he able to make contact with Federer without being tackled?

Two years earlier in 2013, a much scarier incident occurred at Roland Garros during the men’s final between Rafael Nadal and David Ferrer. A masked, same-sex marriage protester ran onto the court with a flare in-hand, coming within a few feet of Nadal. The flare was left ablaze on the court for some time before being extinguished. Four years prior to that, a man entered the court during the 2009 French Open final and tried to physically force a hat and flag onto Roger Federer. Fans have also made it onto the court and made contact with players at the Australian and U.S. Opens.

Luckily these court crashers have not had the ill intentions of a Gunter Parche, but the next one might. The ease at which fans can get onto the court and to the players is frightening. In an effort to create a more intimate fan experience, many of the major tournaments have added new stadiums with more courtside seating (this year the Australian Open even added VIP seating on the court itself), but does this come at the expense of player safety? Let’s hope all tournaments take whatever measures necessary to prevent a recurrence of the awful incident from 24 years ago today.

Related Topics:Monica Seles
Up Next