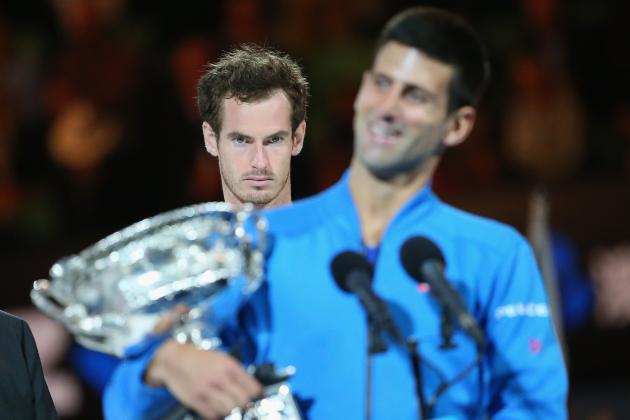 The final everybody wanted is happening. Top seed Andy Murray will take on Novak Djokovic in the final of the ATP Tour Finals with the year-end number one position also at stake.

Both men have reached the final undefeated after topping their groups in the round robin stages. Murray dropped just one set on route to defeating Kei Nishikori, Stan Wawrinka and Marin Cilic in the John McEnroe Group. Meanwhile, Djokovic enjoyed a similar route with triumphs over Milos Raonic, Dominic Thiem and David Goffin (who replaced Gael Monfils) in the Ivan Lendl category. In the semifinals, Murray survived a marathon three-hour and 37 minute win over Raonic. In contrast, Djokovic crushed Nishikori 6-1, 6-1.

Sunday’s final will be the 35th meeting between the two men since 2006. Murray currently trails the head-to-head 10-24 and has lost in three out of their four meetings so far this season (Rome being the one exception). On the other hand, the Brit has been the most dominant player in recent time. Claiming four consecutive titles on route to the London tournament, Murray hasn’t lost a match since the US Open. Within the same time period, Djokovic has experienced less success and failed to reach the final at two consecutive tournaments (Shanghai and Paris).

Murray appears to be the most dominant player out of the two in recent months, but a closer look suggests another factor. Whilst triumphing in a quartet in tournaments between September and November, the Brit never faced a top 10 player. His win over Cilic earlier this week in London, was Murray’s first top-10 win since the Cincinnati Open.

“In terms of winning against Novak or beating Novak, you can only beat the players that are in front of you. I can’t do any more than that.” Said Murray. “I’ve done that this week. I’ve beat three guys in the top five in the world, which some people were not happy that I hadn’t won against the top five players (earlier). Then it will be the top two players, then top one. There’s always something that’s wrong with what you’re doing.”

Deciding who the favourite is going into the match is a tough task. Murray might be the top seed, but Djokovic has a more superior record in end-year finals. This year the Serbian is bidding to win his fourth consecutive title and sixth overall (equalling Roger Federer’s record). Furthermore, the 12-time grand slam champion has spent three hours and 24 minutes less on the court that Murray as he elevates his form in London.

“That’s all I’ve been focusing on, to be honest, really building my game, getting myself to a higher level, quality level of tennis in each match. As I progress through the tournament, that’s what’s happening.” Djokovic said about his London performance.

This year is the first time in history that the last match of the ATP Finals will decide the year-end number one ranking. Murray is hoping to become the 17th player in the history of the Emirates rankings (since 1973) to finish at the top compared to Djokovic, who is aiming to complete the task for the fifth time out of the last six years.

“I’m very honored to be part of the history.” The Serbian said. “That is something we should all be conscious of. I’m excited to go out on the court and battle.”

Born a week apart and growing up together on the tour, Djokovic described his final showdown with Murray as a ‘script from a movie.’ Both men have a high amount of respect for each other with Djokovic describing their relationship as a ‘bromance’. There is a lot to admire about both men, but only one of them will shine in Sunday’s final.

It is more important for Murray to win the first set than Djokovic. In their previous encounters the Serbian is 19-0 when winning the first set compared to his opponents 10-5.

Their four previous meetings of 2016

ATP Finals: The Possible Scenarios In The John McEnroe Ground And The Race To No.1