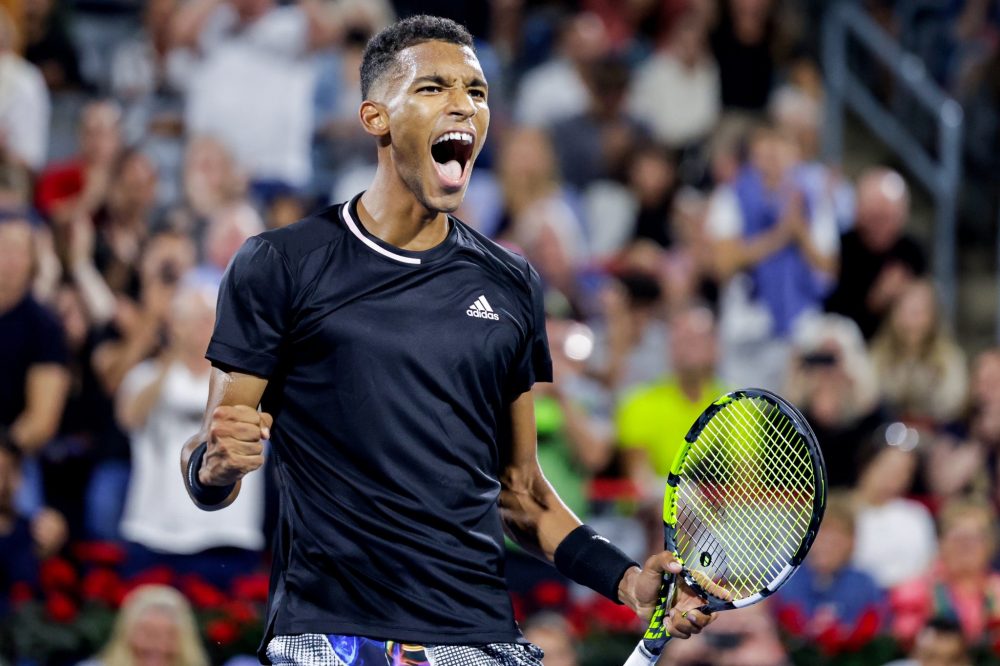 Felix Auger Aliassime won his second-round match in his return to the National Bank Open in Montreal by beating Yoshito Nishioka in straight sets 7-6, 6-4 in two hours and six minutes.

The Canadian served 17 aces and won 90% of his first serve points in the win to get his tournament started.

“There was a lot of excitement, people were talking about it and once I stepped on the court the energy was crazy,” said Auger-Aliassime. “To get the win that is the most important thing, and I’m super thrilled to win tonight”.

The first four games of the match went on serve and at 2-2 Nishioka had five chances to break and managed to break the Canadian serve to take a 3-2 lead but the world number nine broke right back the following game.

The opening set needed to be decided by a tiebreaker and it was the number six seed that jumped out to a 3-1 lead. Eventually up 6-3, he then had three chances to close out the set. However, Nishioka fought back by saving all three set points but at 7-6 the Montreal native pulled off the shot of the match. Playing a 20-shot rally and finishing with a stunning passing shot to win the first set.

Winning the first set motivated Auger Aliassime and with the crowd behind him, he had five chances to get the break in the opening game of the second set but was denied by Nishioka.

At 2-2, the Canadian earned three more chances to break and was able to get the crucial break of serve and was able to serve out the match to the delight of the home crowd.

After the match in his on-court interview, he was asked how much of a lift the home crowd gave him.

“I think it creates a lot of pressure on the opponent and it’s never easy to play in these conditions so I try to enjoy it because I am playing at home this week”. He replied.

A day of upsets in Montreal

It was a day for the history books as the top three seeds all crashed out of the tournament.

World number one Danil Medvedev lost a tight three-set match to Nick Krygios 6-7, 6-4, 6-2 who was coming off making the final in Washington the previous week.

Carlos Alcaraz didn’t look like himself as he was beaten also in three sets by the American Tommy Paul 6-7, 7-6, 6-3 in a match that lasted three hours and 20 minutes.

The number three seed Stefanos Tsitsipas didn’t fare any better as he was bounced out of the tournament by the British qualifier Jack Draper in straight sets 7-5, 7-6.

Taylor Fritz managed to rally down 4-0 in the third set to beat fellow American Frances Tiafoe to secure a 5-7, 6-1, 6-4, and Cameron Norrie beat the Dutchman Botic Van De Zandschulp 6-1, 6-2.

Pablo Carreno Busta beat the Dane Holger Rune 6-0, 6-3 while the Norweigan Casper Ruud beat the Slovak Alex Molcan 7-6, 6-3 in one hour and 57 minutes.

Related Topics:Felix Auger-Aliassime
Up Next

Canada Daily Preview: Two Clashes Between Top 10 Seeds in the Third Round