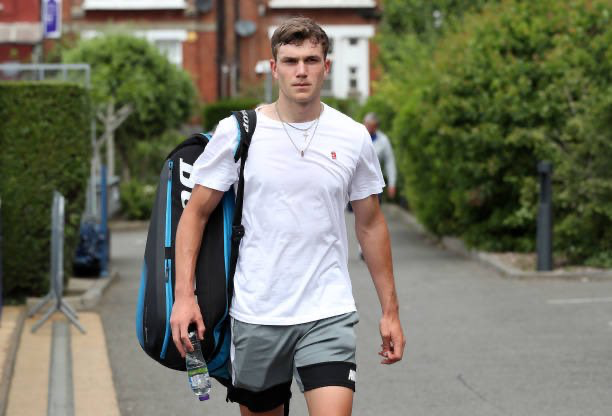 Britain’s Jack Draper was unable to match last year’s dream debut run to the quarter-finals at Queen’s as he was beaten by Finland’s Emil Ruusuvuori.

It completes a fine four match win streak on grass for Ruusuvuori at Queen’s. Having come through qualifying to beat another Brit in Jay Clarke, two-time champion Feliciano Lopez, and even saving match points.

As well as beating Frenchman Quentin Halys and now Draper.

The youngster, 20, was on a high after beating the Indian Wells Masters 1000 champion and world number 14, Taylor Fritz, on Monday.

But defeat to a player just outside the top 50 was certainly a wake-up call for the British number four.

Shortly afterwards, he gave his thoughts on the match.

“In the first set I was letting the ball come onto me a lot.  He was obviously striking the ball well and wasn’t missing much,” he said.

“In the second set, I was trying to get up onto the baseline and impose my game a bit more.

“It was tough though because I struggled to get out of my own service games and then I wasn’t returning well, so I was unable to get a look in on his serve,” he added.

“He served very well but there is a lot I can take away from the match for sure. It’s definitely a tough one to take.”

I took the opportunity to ask Jack about the influence Sir Andy Murray, a three-time Grand Slam champion, has had on his young career.

“I watched him a lot from an early age.  I think he was in his prime when I was eight until I was 14,” he said.

“Watching him and being able to learn from his game without knowing him was great.

“Then obviously I’ve had the chance to hit with Andy and get to know him during the latter part of his career,” he said.

“For a young player like myself, it’s good having that sort of influence, and being around that on a daily basis.

“Because at the end of the day Andy’s a champion. It’s good to understand his habits and the way he lives his life in order to become a top tennis player.

“That definitely gives me a lot of confidence that I can hopefully go down the same path.”

Inside the top 100 at world number 99, Draper will step-up his preparations for Wimbledon by appearing at Eastbourne next week, in the hope of more matches and wins on grass.

Roger Federer Risks Making A Fool Of Himself With Comeback, Claims Tiriac