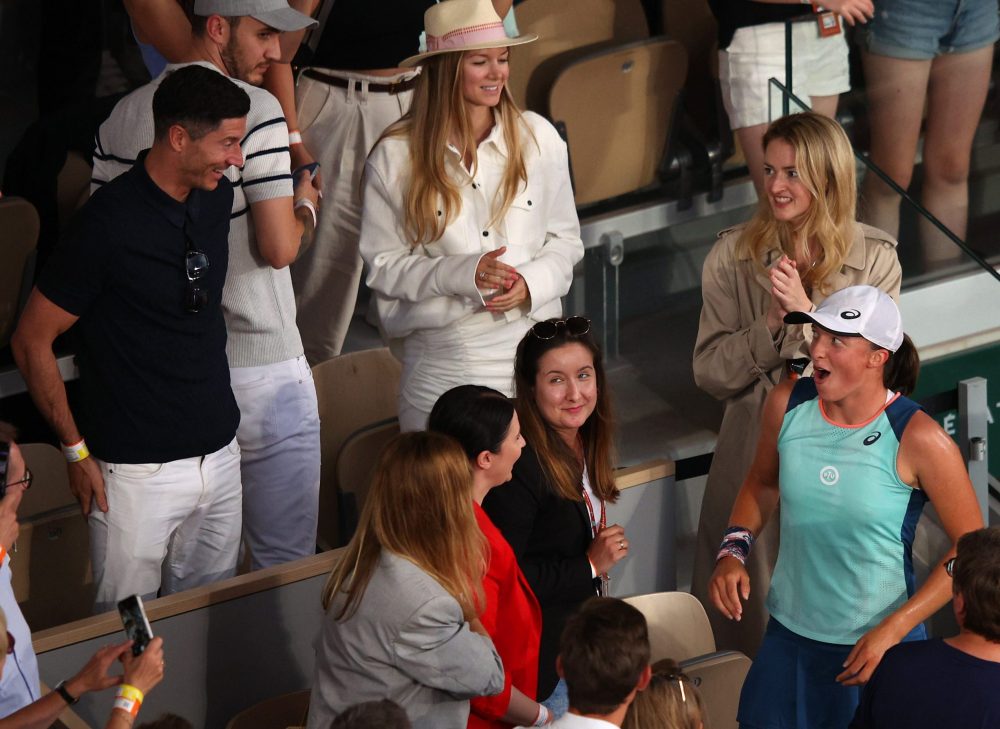 Poland’s star footballer says he expects more success to come for Iga Swiatek in the future after watching her triumph at the French Open on Saturday.

Robert Lewandowski, who has played for Bayern Munich since 2014, was among the thousands of spectators at Roland Garros who witnessed Swiatek’s comprehensive 6-1, 6-3, victory over Coco Gauff in what is her 35th win in a row. He was sitting in her player’s box. Shortly after the conclusion of the final, the two briefly interacted with each other with Lewandowski congratulating the world No.1.

Swiatek has now won six tournaments in a row which hasn’t happened on the women’s Tour for 15 years. She is the fourth youngest player to win multiple French Open titles after Monica Seles, Steffi Graf and Chris Evert. Furthermore, she has won 18 consecutive sets in finals and hasn’t lost any more than five games in her past nine.

“Iga’s success confirmed she’s the best in the world, she won another Roland Garros,” Lewandowski told Eurosport Poland.
“I’m personally very happy I could watch it live because I don’t get many such chances in my career, in my life. So when I have the opportunity, I take it.
“When Iga wins, it’s something fantastic, a perfect combination. The emotions are there. Maybe they are a little bit… I don’t want to say subdued, but on a different level than when I’m on the field.
“But I was looking at many different things, at how Iga and her opponent, Coco, were moving on their feet, making those little steps, at more technical aspects. But at the end of the day, I was very happy then that she won, that was the main goal today.”

Lewandowski serves as the captain of Poland’s football team and has scored 344 goals in 374 competitive games for Bayern Munich. He is second on the all-time list for most goals scored in the Bundesliga after Gerd Müller.

“He’s been a top athlete in our country for so many years that it still feels, it’s hard to believe that he actually came to watch me,” Swiatek said during her press conference. “I hope he liked it. I hope he’s gonna come back.”

It remains to be seen how much longer Swiatek can continue to dominate the women’s Tour. This year she has already won $6M in prize money and that doesn’t count any endorsements. Her win-loss for this season currently stands at 42-3 which is 17 more than any other female player.

Whilst she is staying in the moment and not thinking too far ahead, Lewandowski is confident that there will be plenty of success still to come in the future for Swiatek.

“I’m counting on more in the near future. She is on top of not only women’s tennis but also she’s getting closer to what’s coming to her. New experiences, new things she will have to overcome. She is definitely aware of that,” he said.
“We see that not only in the way she is and plays, but also in what kind of person she is. She knows what she’s doing, she walks the path she chose for herself. I hope she can make all her dreams come true and reach her goals because that’s what is most important in an athlete’s career.”

Swiatek is the youngest multiple Grand Slam champion Since Maria Sharapova won her second title at the 2006 US Open.

Iga Swiatek Hits With A Purpose To Glory