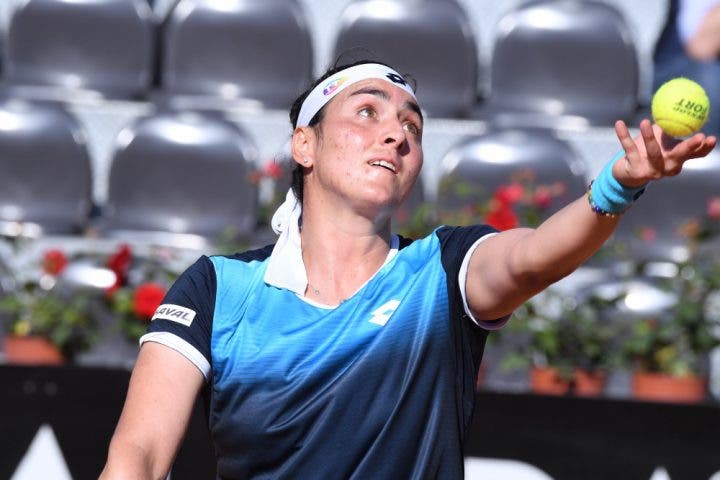 Jabeur has extended her winning streak to ten consecutive matches. The Tunisian player is the tour-level clay court win leader in 2022 with 16 wins on this surface so far. She has reached the final in Charleston and the quarter finals in Stuttgart before lifting the trophy in Madrid last week. She has won 24 WTA level matches this year on all surfaces and is the second best player this year. Iga Swiatek has won the most matches on tour with 33 victories.

Jabeur has extended her lead to 2-1 in her head-to-head matches against Sakkari.

Jabeur won 70% of her first service points and converted six of her twelve break points.

Sakkari won 74% of her her service points and saved the only break point she faced in the first set. The Greek player built up a 6-1 5-2 lead in the second set. Jabeur pulled one break back, when Sakkari was serving for the match at 5-2.

Jabeur broke for the second consecutive time with a drop volley winner to draw level to 5-5. The African player won her fifth consecutive game with a forehand pass winner on her first set point.

Jabeur raced out to a 5-1 lead in the third set and converted her first match point after Sakkari fired a service return wide.

“In my head at 2-5 down I said: ‘You cannot finish those amazing three weeks, like this. That’s what got me started. I am very happy that I could get the win at the end. It’s not easy to play against Maria. I know she hit really hard. I could not find my rhythm at the beginning, but I am glad with a little bit experience that I have. I could pull off the win”.

Jabeur set up a match against Daria Kasatkina, who was leading 6-4 3-2, when Jill Teichmann was forced to retire from the match due to a left thigh injury.

Kasatkina has reached the semifinal in Rome for the first time in her career. The Russian player has beaten four top 30 players this week, including her third top 10 win of the year against number 2 seed Paula Badosa earlier this week.

Kasatkina is a win away from her second WTA 1000 final final.

“With every set I play, I played better and better. I am happy with the way I feel on the court. Maybe not all the time I am making the right decisions and I am doing the right shots, but I am happy generally with how I am on the court. I don’t know about other players, but this is what I am always trying to search for”, said Kasatkina.

Jabeur leads 3-2 in her previous head-to-head matches against Kasatkina. Last month Jabeur beats Kasatkina 6-3 6-3 in the second round in Stuttgart.