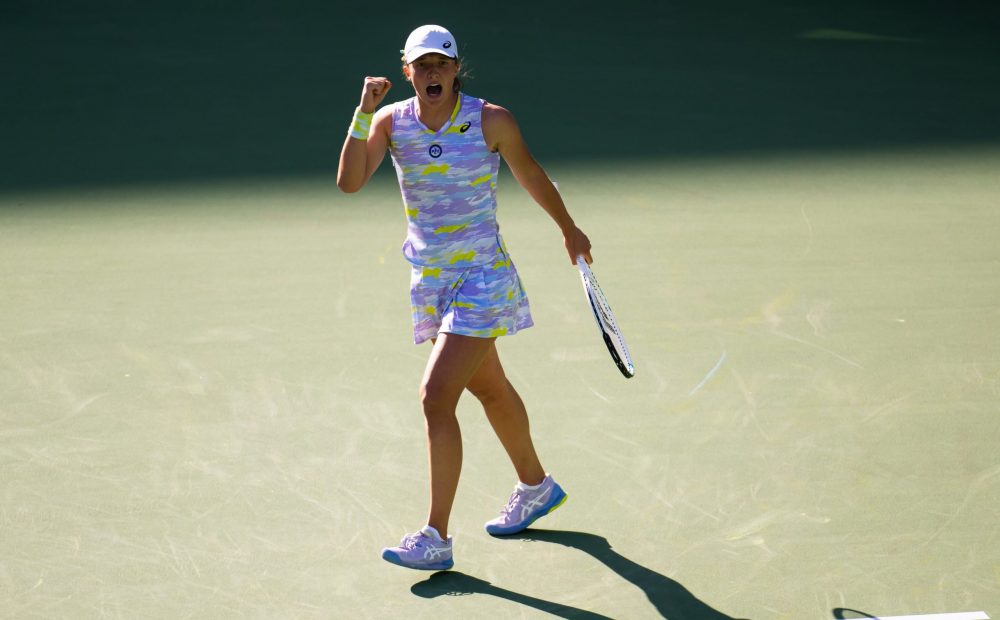 At the age of just 20 Iga Swiatek has entered new territory in her career after officially securing the world No.1 ranking for the first time at the Miami Open on Friday.

Swiatek, who won the 2020 French Open, thrashed Switzerland’s Viktorija Golubic 6-2, 6-0, in her opening match at the WTA 1000 event. The triumph has secured her rise to the top spot on April 4th when she will replace the recently retired Ash Barty. Swiatek has become the youngest woman to reach the milestone since Caroline Wozniacki in 2010 and the first Polish player in history to do so. Overall, she is the 28th player to claim the No.1 spot on the WTA Tour.

Moments after her win, Swiatek was presented with flowers by tournament director James Blake to mark the occasion, as well as Lindsey Davenport who was also in attendance during the on-court presentation. It was only then when the Pole started to realize the enormity of what had happened.

“(It’s) Pretty surreal. On one hand, these are the most special moments that you’re going to remember for the rest of your life, but on the other hand, that match was just another match,” said Swiatek.
“Before that match, I wanted to remember that the court is the same, the opponents are the same because we are on the same tour.’
“It hit me after the match, because I was so focused on the performance that I didn’t think about that during.”

It was back in May where Swiatek cracked the top 10 for the first time in her career. Since then, she has made steady progress on the Tour by winning three out of her five WTA titles. Her most recent triumph at the BNP Paribas Open earlier this month moved her into the top three for the first time.

As the new No.1 there will be higher expectations from some and perhaps greater interest from sponsors. Something which could be overwhelming for a player as young as Swiatek. However, she hopes to stay grounded with the support of her coach Tomasz Witkorowski, as well as her psychologist Daria Abramowicz.

“Talking to Daria helped a lot because I feel I don’t have to keep all these emotions inside. I can also use my coach’s experience and Daria’s experience to stay focused on the job,” she explains.
“I always try to remember in moments like that that it’s not a coincidence and I worked hard and I have the skills and abilities to be in that place.”

Whilst relishing in her latest success, Swiatek admits there is no time to take her foot off the gas. In Miami she is seeking to become only the fifth woman to achieve the sunshine double. Following a series of high-profile defeats in this year’s tournament, she is one of only two top-five players to have won their opening match. The other is Spain’s Paula Badosa.

“I want to enjoy this moment, but on the other hand, I need to be focused on my next match, so I have to kind of balance that. For sure, today is the evening for celebration, but tomorrow, we’re going to go back to work,” she concluded.

Swiatek will play America’s Madison Brengle in the third round.

Rafael Nadal Speaks Out On Race To No.1, Admiration For Williams Ahead Of Return