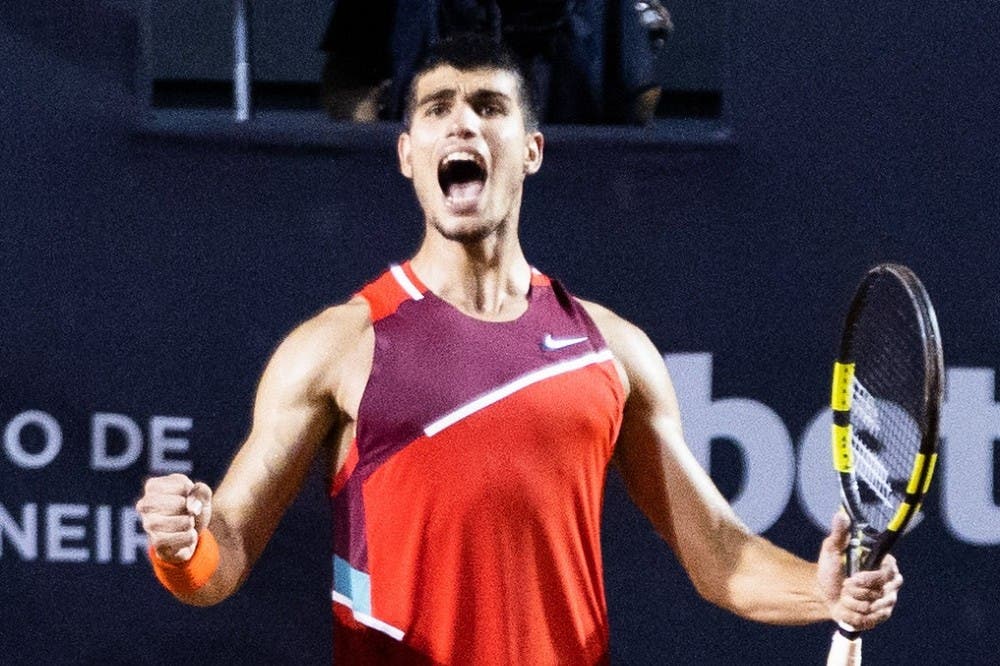 Carlos Alcaraz beat Matteo Berrettini 6-2 2-6 6-2 in the quarter final and Fabio Fognini 6-2 7-5 in the semifinal on a very busy Saturday following a rainout on Friday to reach the final at the Rio Open in Rio de Janeiro.

The third set between Alcaraz and Berrettini resumed on Saturday after a suspension due to rain for 1 hour and 45 minutes.

Alcaraz rallied from 15-40 down to earn a break at deuce in the third game of the decisive set for 4-2. Berrettini faced three match points on his serve in the eighth game. The 2021 Wimbledon finalist saved the first match point, but Alcaraz converted his second chance to seal the win. Alcaraz reached his second ATP 500 semifinal following Vienna.

Fognini opened up a 4-1 lead with a break in the fourth game of the second set. Alcaraz broke back in the seventh game to draw level to 4-4. The 2021 Next Gen ATP Final champion earned his second break in the 11th game before closing out the second set on his first match point. Fognini hit a lob followed by a down the line backhand to stay alive at 15-15 in the final game, but Alcaraz won the next three points to close out the match.

Alcaraz set up a final against Diego Schwartzman, who beat Francisco Cerundolo 7-6 (7-4) 6-3.

“It means a lot to me. I surprised myself to be able to win two matches in a row in the same day. It’s tough to win one match, two is even tougher. I am really focused on the final. I know that it’s going to be a really tough final against Diego Schwartzman. He is playing well and plays really good tennis on clay. I am really excited to play the final”, said Alcaraz.

Schwartzman backed up his win over Pablo Andujar in a marathon match with a two-hour victory over Francisco Cerundolo to reach his second ATP Tour final in as many weeks.

Schwartzman went down an early break in the third game of the first set, but he saved five break points to hold serve in the seventh game for 3-4. The Argentine player saved a break point on serve to get to 5-4. He fended off two more chances on the return and broke back to draw level to 5-5 before forcing the match to tie-break. Schwartzman won the final three points to seal the tie-break 7-4 before breaking serve in the third game to take a 3-1 lead. Cerundolo won two consecutive love games to draw level to 3-3 but Schwartzman broke serve in the seventh and ninth games to seal the win.

“I am in a good position right now. I already played, I am in the final, so let’s see who wins, and I will ty my best tomorrow”, said Schwartzman.