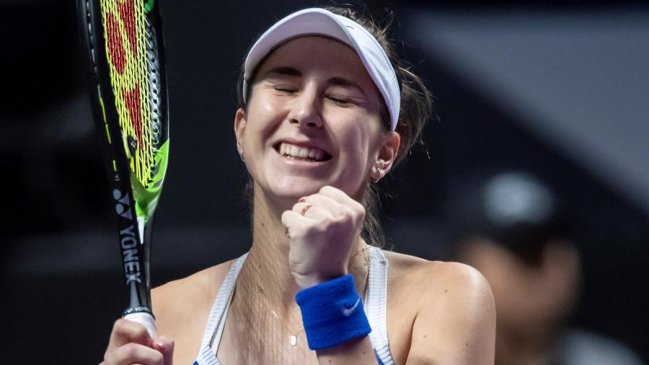 Bencic converted on three of her four chances and never faced a break point.

Bencic won her fifth consecutive win against a left-hander player. In 2021 she won 9 of her 11 matches against lefty opponents.

Bencic will face either Giuliana Olmos from Mexico or Oceanie Dodin from France.

Bencic broke once in the first game of the first set and in the third and fifth games of the second set.

“It’s very tricky to play the first match of the year. I actually felt well today. I think it’s just about taking it easy, not putting so much pressure at the start of the year, to just take time to get into it”, said Bencic.

Ajla Tomljanovic eased through to the second round with a 6-2 6-3 win over Slovak qualifer Anna Karolina Schmiedlova. Tomljanovic, who is the second highest ranked player behind Ashleigh Barty, set up a second round match against last year’s Indian Wells champion Paula Badosa.

Tomljanovic raced out to a 3-0 lead with a double break. Schmiedlova pulled one break back in the fourth game, but Tomljanovic broke serve at love in the seventh game to win the first set 6-2. Tomljanovic rallied from 0-3 0-40 down on serve by winning six consecutive games to claim the second set 6-3.

“At 0-3 0-40, I was thinking that this might go into a third set, but I still wanted to keep playing good tennis so I had the momentum going into the third set. I guess that mentality helps you to keep believing that you can turn things around as well”, said Tomljanovic.

Elise Mertens knocked out Fiona Ferro 6-2 7-6 (7-5). Mertens broke twice in the first and fifth games to open up a 4-1 lead. Ferro pulled one break back in the sixth game for 2-4, but Mertens earned her third break at deuce in the eighth game to close out the first set 6-2.

Ferro earned an early break to take a 2-0 lead in the second set. Mertens won three games to take a 3-2 lead with two breaks of serve. Ferro broke twice to take a 5-3 lead. Mertens reeled off three consecutive games with two consecutive games to take a 6-5 lead. Ferro broke back to draw level to 6-6. Ferro earned an early mini-break after a double fault from Mertens to take a 3-1 lead. Mertens broke back for 2-3. Ferro got her second mini-break after another double fault from Mertens. The Belgian player pulled back on serve to draw level to 4-4 and won three of the next four points to win the tie-break 7-5.

Brandon Nakashima and Sebastian Baez reach the second round in Sydney

Andy Murray Believes Tennis Should Move On From Djokovic Situation