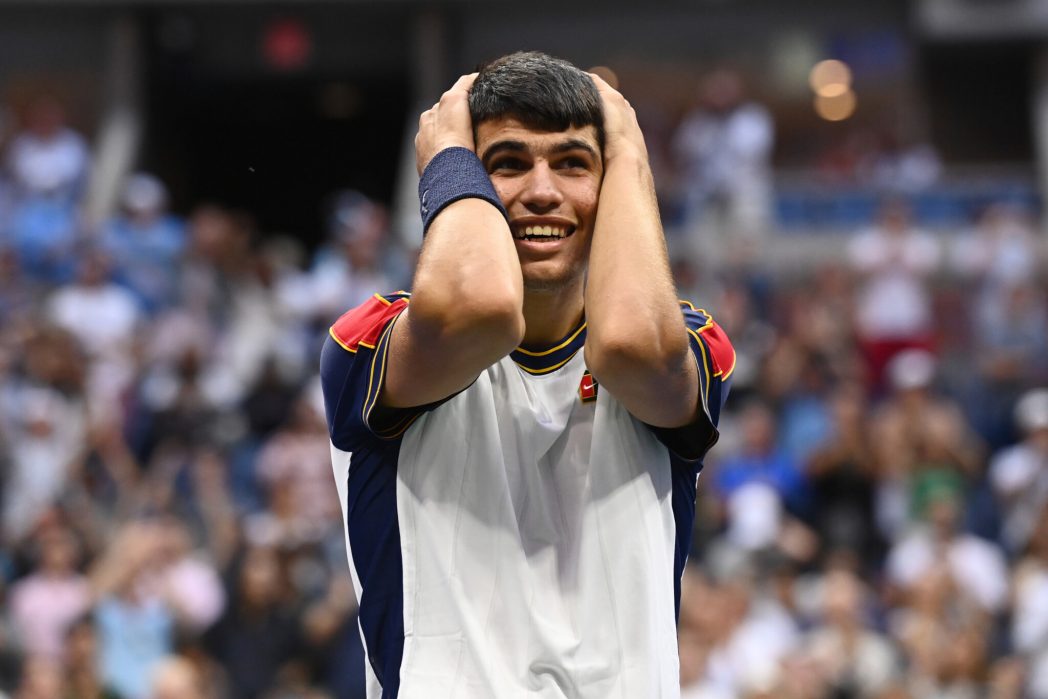 Carlos Alcaraz, Lorenzo Musetti and Sebastian Korda are getting ready to make their debut at the Intesa San Paolo Next Gen ATP Finals in Milan.

Alcaraz and Musetti hit together to adjust to the conditions on the indoor hard-court at the Allianz Cloud in Milan, which hosts the under 21 tournament for the second time.

Alcaraz has been drawn in Group alongside Brandon Nakashima, Juan Manuel Cerundolo and Holger Rune.

The Spanish teenager lifted his first ATP title in Umag during his breakthrough 2021 season becoming the youngest ATP Tour champion since Kei Nishikori at 2008 Delray Beach and the youngest Spanish ATP Tour titlist since Rafael Nadal in Sopot 2004.

At the US Open the Spanish rising star claimed his first top 10 win against world number 3 Stefanos Tsitsipas in the third round en route to his first Grand Slam quarter final. At the age of 18 he became the youngest quarter finalist at the US Open and a Grand Slam tournament since Michael Chang at 1990 Roland Garros.

Alcaraz began playing at the age of 4 thanks to his father. He is coached by Juan Carlos Ferrero, who won the French Open title and became world number 1 soon after Alcaraz was born in 2003. Carlos was named ATP Newcomer of the Year in 2020 after moving up from world number 491 to 141 in the ATP Ranking. He climbed to world number 35 at the end of 2021. Alcaraz beat Stefanos Tsitsipas in the third round of the US Open, former world number 1 and double Olympic champion Andy Murray and Wimbledon finalist Matteo Berrettini in Vienna.

“I am so excited to play here against the best young players of the year. I am really happy to be here. I am feeling comfortable and have a lot a confidence with myself. It has been a brilliant year and I hope to show a good level here at the Next Gen Finals”, said Alcaraz to the ATP Tour website.

Musetti rose from world number 128 to a career-high 57 last June following his run to the French Open fourth round. He will make his debut at the Next Gen finals. Two years ago he made an attempt to book a spot for the Next Gen Finals at the qualifying tournament for the best under 21 Italian players, but he lost in the semifinal.

“Two years ago I played a lot of matches on clay. For this reason I was not in my best form, but I really enjoyed playing the qualifying tournament with the new rules. This year I played a lot of indoor matches and I hope I will not have problems to adapt to the court conditions”

In 2020 Musetti advanced to the semifinal at the Sardinia Open and beat Stan Wawrinka and Kei Nishikori to reach the third round at the Internazionali BNL d’Italia in Rome, becoming the first player born in 2002 to win an ATP Tour match and the youngest player to reach the Rome third round since Fabrice Santoro in 1991. After Rome he beat four top 100 players to win his first Challenger title at the tournament in Forlì as wild card.

At 2021 Roland Garros Musetti led Novak Djokovic by two sets to love before the world number 1 player came back to win the fourth-round match in five sets.

The young player from the Tuscan town of Carrara will carry the hopes of Italian fans at the Allianz Cloud in Milan. He is looking forward to playing on home soil and aims at following in the footsteps of his compatriot Jannik Sinner, who won the Next Gen ATP Finals title in 2019. Musetti has been drawn in the same draw as Sebastian Korda, Sebastian Baez and Hugo Gaston.

“I watched the matches from Jannik Sinner when he won, so I hope to do the same and win the trophy. I think everyone is honoured in this competition and playing the event this week”, said Musetti.

Musetti lost in the semifinal of the ATP Challenger tournament in Milan losing to Hugo Dellien in June 2019.

“I have improved a lot physically since 2019 and I have more experience, especially this year in my first year on the ATP Tour. I will have more expectations. I will be very pleased to receive the support from the crowd”.

Sebastian Korda won his first ATP Tour title in Parma without dropping a set in the whole tournament and reached the fourth round at Wimbledon and the quarter finals at the Miami Masters 1000 tournament. In his breakthrough season Korda rose from outside the top 100 at the start of the year to a career-high number 38 in October.

“My main goal at the start of the year was to finish the season in the top 50. Ending the season in the top 40 means that I have  enjoyed a fantastic year. I have learnt a lot from playing on the Tour. I have become more confident match after match. I feel that I am ready to play at high level. This is the most important thing. There are a lot of good players coming up right now. You have to be so mentally focused throughout the whole match. One point, one game, you could lose the match easily. You have to grind for every point and figure things out”, said Korda.

The US player of Czech player joined his father Petr Korda as third father-son duo to win an ATP title in the Open Era. Petr Korda won the 1998 Australian Open, reached the 1992 French Open final and moved up to a career world number 2. His son won the Australian Open Junior title in 2018.

“My father is a secret weapon in a way. He has been on the Tour for a long time. He has made it to the top, won a Grand Slam, and coached someone who has made it to the top 10, so he knows what to do. The tough decisions look easy sometimes, so I am super grateful to have him in the corner”.

Sebastian’s mother Regina Rajchrtova peaked at world number 26 in the WTA Ranking and coached him as a child. His sisters Jessica and Nelly are pro golfers on LPGA Tour. Korda began playing hockey and dreaming of pursuing a NHL career. He started playing tennis at the age of 9 after attending the US Open. His idols growing up were his father, Radek Stepanek and Rafael Nadal.