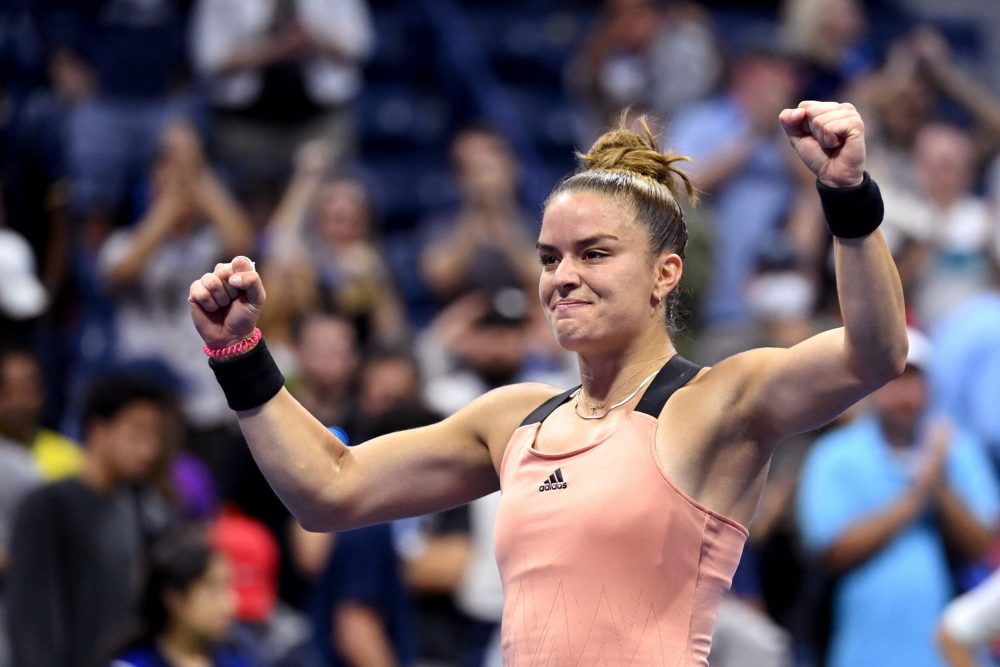 Maria Sakkari celebrates her win during a Women's Singles match at the 2021 US Open, Monday, Sep. 6, 2021 in Flushing, NY. (Garrett Ellwood/USTA)

Greece’s Maria Sakkari says she has been struggling with her own identity in recent times and had ended up in tears during her practice sessions after reaching the quarter-finals of the US Open.

The world No.18 outlasted Bianca Andresscu 6-7 (2-7) 7-6 (8-6) 6-3 in what was a three-and-a-half-hour blockbuster. Sakkari finally crossed the finish line at 2:15 am to make the match the latest women’s match to ever finish in US Open history. In the decider, she battled back from a 0-2 deficit by breaking Andreescu in three of her next four service games. During the clash, Sakkari hit eight aces and 46 winners.

“It was an incredible match. I didn’t have control of the match until the middle of the second set. I felt like she was better than me, but then somehow I digged in and found a way to just turn things around,” Sakkari told reporters afterwards.
“I was more brave after a certain point of the match, then got my energy level a little bit higher.”

It is only the second time Sakkari has reached the last eight of a Grand Slam after the French Open. Prior to Andreescu, she also scored wins over Petra Kvitova, Kateřina Siniaková and Marta Kostyuk.

Reaching the quarter-finals in New York has been far from easy for the 26-year-old who admits in recent weeks she has been struggling on the Tour. Following her loss to Angelique Kerber at the Western and Southern Open less than a month ago, Sakkari said she, ‘lost her identity‘ on the court, but managed to regain it with the help of her coaches and psychologist.

“After my loss with Angie, I just practiced for two weeks. I had some very tough practices where I was crying because I could not feel my shots, I could not feel my tennis. But thankfully I had Tom and Yannis, my hitting partner, that supported me a lot,” she said.
“I lost my identity. That’s how I called it. I lost myself, part of myself. With my psychologist, as well, I found a way to come back and feel again what I felt out there today.”

Sakkari praises her team for helping her to become ‘more brave’ during matches where she isn’t afraid to go for her shots on the big points. Something she believes she lost after her run to the French Open semi-finals earlier this year.

Awaiting Sakkari in the next round will be Wimbledon runner-up Karolina Pliskova who defeated Anastasia Pavlyuchenkova 7-5, 6-4, in her fourth round match. They are tied at 1-1 in their head-to-head but are yet to lock horns on a hardcourt. In one of their previous matches at the Italian Open, Pliskova made headlines for smashing her racket against the umpire’s chair out of frustration.

“We practiced before the tournament started. She’s a very funny girl. We have a great relationship even though some people think that after what happened (in Rome) we don’t. Actually we do,” she commented.
“She has played the final here. She has more experience than me. But I’m just going to stick to what I’m doing best, try to return as good as I can, because that’s I think the most important thing against Karolina. Just keep fighting, that’s it. That can take you far.”

Related Topics:2021 US OpenMaria Sakkari
Up Next