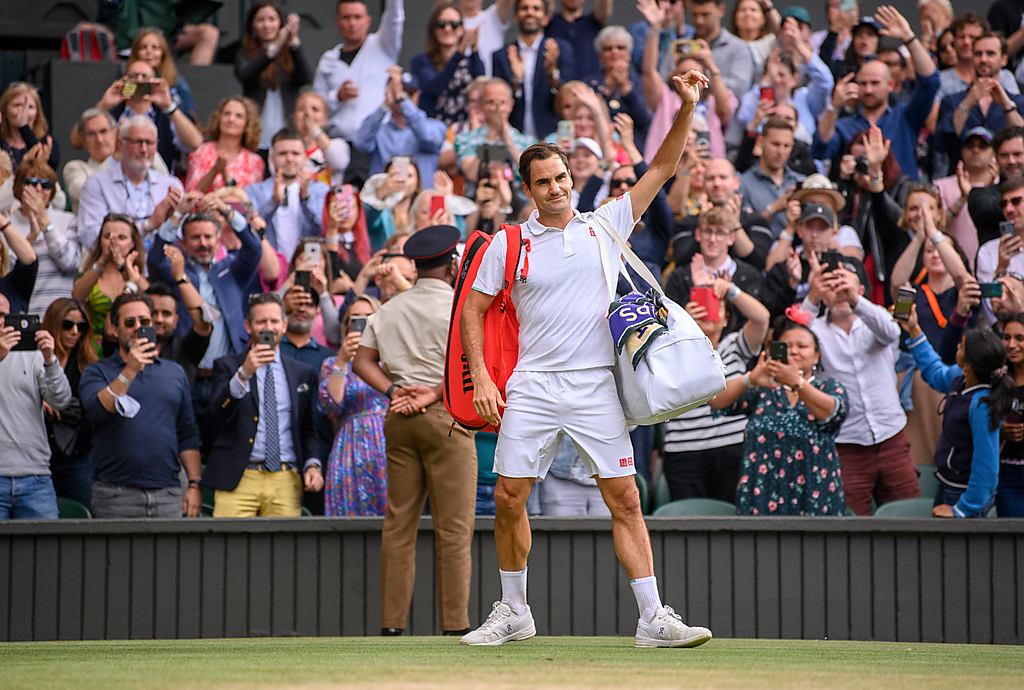 Roger Federer (SUI) waves to the crowd as he leaves the court after being defeated by Hubert Hurkacz (POL) in the quarter-final of the Gentlemen's Singles on Centre Court at The Championships 2021. Held at The All England Lawn Tennis Club, Wimbledon. Day 9 Wednesday 07/07/2021. Credit: AELTC/Ben Solomon

Roger Federer’s return to Wimbledon came to a bitter end on Wednesday when he was comprehensively beaten in the quarter-finals by Polish world No.18 Hubert Hurkacz.

The eight-time champion could only win nine games during what was his first straight sets defeat at the tournament since 2002. Federer, who had defeated seeds Cameron Norrie and Lorenzo Sonego earlier in the tournament, looked to be far from his best during what was an error-stricken performance. Towards the closing stages of the match the Swiss Maestro rapidly faltered and ended up getting bageled. Something that hasn’t happened to him at a major since the 2008 French Open final.

Federer’s disappointing exit comes during a season which has evolved around his goal of trying to peak in time for the tournament. After missing most of 2020 due to a knee injury which required two surgeries, the 39-year-old told reporters back in March that playing once again at The All England Club is his main motivation. Now his run at Wimbledon has ended, there are fears that he may not return again.

“I’m actually very happy I made it as far as I did and I actually was able to play Wimbledon at the level that I did after everything I went through,” said Federer. “Of course I would like to play again, but at my age you’re just never sure what’s around the corner.”

Set to turn 40 next month, Federer is the oldest player in the top 150 and the eight oldest to have an ATP ranking of any sort. Japanese world No.820 Toshihide Matsui is 43. Over the past 20 years he has established himself as one of the sports all-time grants with the help of winning 103 ATP titles and earning more than $130M in prize money. He has become one of the highest paid athletes in the world with Forbes.com estimating his earnings to be in the region of $90M between 2020-2021.

Over the coming days Federer and his team will plot their next move amid uncertainty over his participation in the upcoming Tokyo Olympics. Although it is still too early to write him off yet. Renowned for being coy about his future plans, he clarified if he was considering retiring from the sport in the ‘immediate future’ when questioned by reporters in London.

“No, it’s just about having perspective,” he replied. “You need a goal when you’re going through rehab with what I did. You can’t think of the entire mountain to climb at once. You got to go in steps. Wimbledon was the initial first super step.’
“I knew it was going to be really hard, to be honest. Now I just got to talk to the team, take my time and not feel rushed. I got to take my time, make the right decision and the one decision I want to take and where I feel most comfortable.”

One of the things athletes can’t prevent is getting old with Federer being the first to admit he is finding certain parts of his game difficult compared to the past. For him, the main focus is looking at everything in perspective with continued belief that he can still be a force to be reckoned with on the Tour.

“Clearly there’s still a lot of things missing in my game that maybe 10, 15, 20 years ago were very simple and very normal for me to do,” he admits. “Nowadays they don’t happen naturally anymore. I got to always put in the extra effort mentally to remind myself, remember to do this or do that. I have a lot of ideas on the court, but sometimes I can’t do what I want to do.”