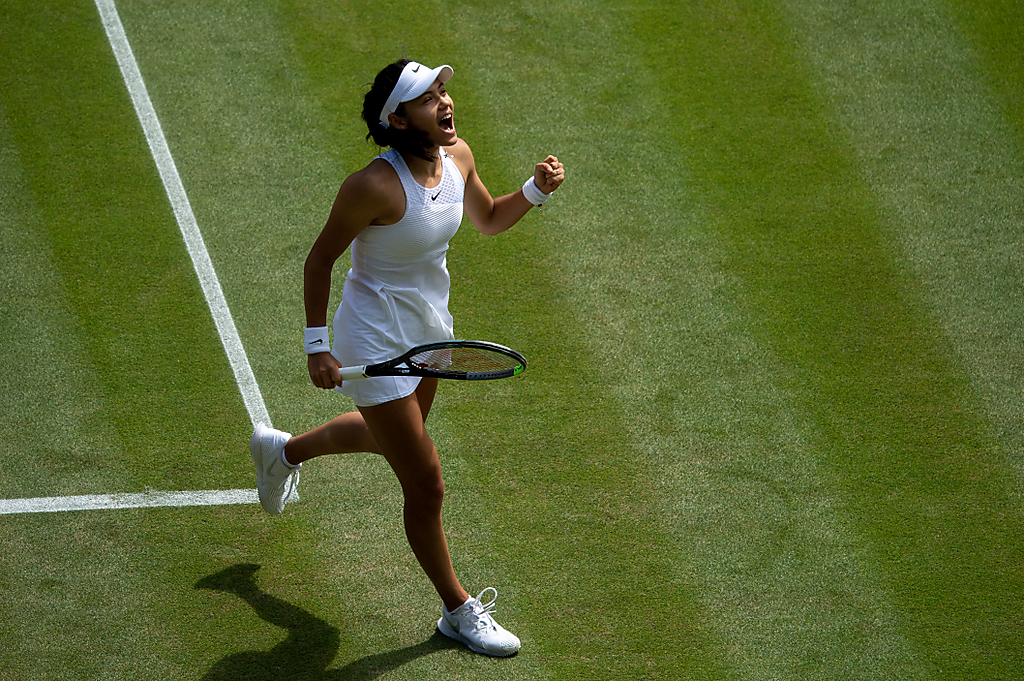 Emma Raducanu (GBR) celebrates after winning a point against Sorana Cirstea (ROU) in the third round of the Ladies' Singles on No.1 Court at The Championships 2021. Held at The All England Lawn Tennis Club, Wimbledon. Day 6 Saturday 03/07/2021. Credit: AELTC/Jonathan Nackstrand

England footballer Marcus Rashford has revealed that he once went through a similar experience to Emma Raducanu who was forced to retire from Wimbledon on Monday.

The 18-year-old stunned the tournament by reaching the fourth round as a wildcard in what was only her second Tour event. Facing Ajla Tomljanović on Monday evening Raducanu took a medical timeout during the second set and was advised by a doctor to stop playing after experiencing ‘breathing difficulties.’ During an interview with the BBC the following day, the teenager admitted that ‘things caught up with her’ but she is unsure about what exactly happened to her.

“I found it very difficult to regulate my breathing. I think that it was emphasized by some very long rallies which we had toward the end of the first set, which made it tough for me to keep my composure and the breathing in check,” she said.
“I don’t know what caused it. I think that it was a combination of everything that has gone on behind the scenes in the last week, accumulation of the excitement, the buzz.”

Raducanu has rapidly risen to fame over the past week with her photo being on the front page of numerous national newspapers. Her Instagram following has increased by more than 100 times from 2000 to over 200,000. At Wimbledon she beat Vitalia Diatchenko, former French Open finalist Markéta Vondroušová and Sorana Cirstea to become the youngest British woman in the Open Era to reach the fourth round.

After issuing a statement on social media regarding her retirement, England and Manchester United star Rashford revealed that a similar thing happened to him during a national game when he was younger. He is England’s third-youngest goal scorer in history after Wayne Rooney and Michael Owen.

“It happened to me playing for the national team in U16s against Wales,” he wrote on Twitter. “I remember it to this day. No explanation for it and it never happened again. You should be very proud of yourself. The country is proud of you. Glad to read you’re feeling better. Onwards and upwards”

Replying to the comment, Raducanu said Rashford’s message ‘means a lot’ and has vowed to come back stronger following the experience. The world No.338 is a football fan herself and wore an England shirt during her BBC interview ahead of their crucial semi-final clash with Denmark in the Euros.

“I think I’ll be at home for sure just watching the game,” she said. “ It’s been a busy two weeks. I think I’ll just kick back at home for the next few days and definitely enjoy the game. It’s coming home, isn’t it?”

Following her Wimbledon run Raducanu will rise from 338 to inside the world’s top 180 in the WTA rankings next week.

Murray gives his verdict on Clijsters’ current form and if she can return to the top of the game.

Andy Murray believes it is only a matter of time before Belgium’s Kim Clijsters is able to return to her winning ways on the Tour.

The 38-year-old is currently in the process of her latest comeback which has been hampered by both injury and the COVID-19 pandemic. Since returning to the Tour at the 2020 Dubai Tennis Championships, Clijsters has only played in five tournaments and is yet to win a match. Her most recent defeat was at the BNP Paribas Open in Indian Wells where she was ousted 6-3, 5-7, 6-3, by Hsieh Su-Wei.

It was in Indian Wells where Clijsters held a hitting session with Murray who says he was impressed by her level of play. Speaking to reporters in Antwerp where he is playing in the European Open this week, the three-time Grand Slam champion believes she is heading in the right direction.

“She still hits the ball fantastic. I think the decision-making and things like that will come with more matches,” atptour.com quoted Murray as saying. “I think physically she can get stronger. I think that was probably one of her biggest strengths when she was at the top of the game and as successful as she was.
“With more time, more matches, more time on the practice court, physically she’ll keep getting better. It’s not easy after such a long time out of the game, but I’m sure she can still win matches at the highest level, judging on how she’s handled herself so well.”

Following her most recent match, Clijsters said she is progressing well on the Tour given her lack of match play in recent times. She has only played two matches this year. The other took place in Chicago where she lost to Keterina Siniakova in three sets.

“I think for me the most important thing is that, what I talked with my coach and my trainer about, my fitness coach, was physically being able to get through these matches without big concerns. That was the main goal,” Clisjters said following her loss to Su-Wei.
“I came close, but still have a good feeling about, you know I’ve made progression and I think that’s the most important thing.”

Clijsters has won 41 WTA titles during her career with the last of those occurring a decade ago at the 2011 Australian Open. She has held the world No.1 spot for 20 weeks and has earned more than $24.5M in prize money.

It is unclear as to what tournament Clijsters will be playing next.

The world No.2 reflects on her year so far as she aims to end the season on a high.

This year has been full of mixed emotions for Aryna Sabalenka when it comes to playing in the four most prestigious tournaments of the sport.

In the Grand Slams the world No.2 achieved the best performances of her career to date by reaching the semi-finals at both Wimbledon and the US Open. A breakout run for the Belarussian who had never gone beyond the fourth round of a major until this season. She was denied a place in her maiden final by Karolina Pliskova and Leylah Fernandez with both of those matches being three-set encounters.

Whilst Sabalenka has a lot to be proud of when it comes to these results, does she have any regrets as well?

“I would go back to my semifinal matches at the US Open and Wimbledon. I would have tried to do everything differently – maybe I would have been less nervous,” she told reporters during her pre-tournament press conference at the Kremlin Cup. “The game was very nervous, and I would have returned to these matches to worry less.”

The 23-year-old believes her experiences will place her on a strong footing going into future Grand Slam events. In recent years she has also turned to the help of a sports psychologist but says it doesn’t fully prepare her for the real thing.

“I have been working with a psychologist for a very long time. In fact, if you look at me 4 years ago and now, I have improved my psychological condition,” she said.
“It seems to me that no psychologist will prepare me for these situations (in Grand Slams). You need to go through it yourself, feel it, get nervous, understand this situation for yourself.’
“I’m more than sure that the next semifinal at the Slam I won’t be so nervous. I will act more confidently, I won’t make the stupid errors that I made in important moments in the last semi-final. It’s a matter of experience, you need to go through it. I don’t think a psychologist will be able to prepare for this.”

So far this season Sabalenka has contested three Tour finals, winning titles in Abu Dhabi and Madrid. Overall, she has won 43 matches on the WTA Tour which is the third highest tally after Barbora Krejcikova (44) and Ons Jabeur (48). She is also currently at a ranking high of second in the world and has defeated three top 10 players – Krejcikova, Ash Barty and Simona Halep.

However, Sabalenka believes there is still room for her to improve further. She is currently coached by Anton Dubrov who previously worked as her hitting partner for 18 months.

This week’s Kremlin Cup will be the first tournament Sabalenka has played since the US Open. She was forced to miss Indian Wells after testing positive for COVID-19 which left her bed bound for four days. Whilst admitting she is yet to reach her full fitness since being ill, Sabalenka is not letting that get in her way.

“I’m not in my best shape, but I know that I need the upcoming matches in the Kremlin Cup, because I haven’t played for almost a month. Maybe I haven’t returned to 100% of my physical form, but psychologically I am at my maximum and ready to win no matter what.” She concludes.

Sabalenka is the top seed in Moscow and will begin her campaign against Australia’s Ajla Tomljanovic.