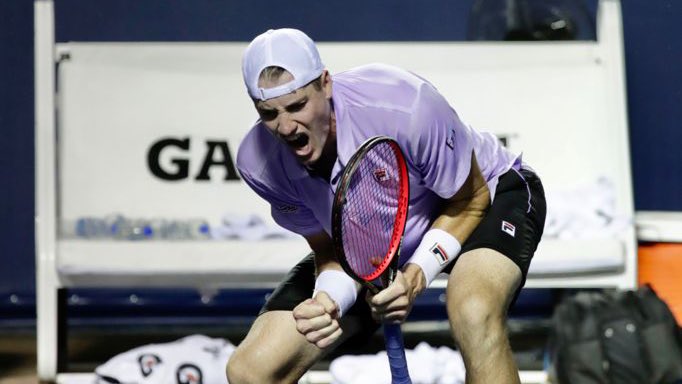 John Isner was made to work in his first match at the Los Cabos Open in Mexico.

The second seed battled his way to a marathon 7-5, 3-6, 7-6, win over world No.157 Evgeny Donskoy in two hours and 12 minutes on Grandstand Caliente. Isner was impressive behind his serve as he fired 25 aces and won 91% of his first service points.

“Sometimes those ugly wins feel the best and that was certainly the case tonight and it was very difficult the whole match but I was able to get the win in the end”. Said Isner.

Both players did a good job holding serve in the first set and neither cracked until 5-5 when Isner American had one look at a breakpoint. He managed to take it and that break was enough for him to serve out the first set.

The second frame wasn’t as straightforward as the first and it was the Russian who earned his first three breakpoints of the match with the American able to save two before double-faulting on the third giving him the break. Again that one break was good enough for Donskoy to serve out the second set a force a third and deciding set.

Isner went searching for the early break in the third set and had three chances but failed to convert. Eventually it would be a tiebreaker which decided the winner.

In a nail-biting tiebreaker it was Donskoy who got the first break but the American responded the very next point with a cross-court forehand winner to go back on serve at 3-3. Isner then got the crucial break of serve at 5-4 and served out the match to book his spot in the quarterfinals on Thursday where he will face Alex Bolt.

After the match in his post-match press conference, he explained how tough it was to win that match.

“It was a very difficult match, it wasn’t easy and it was a struggle the whole match. I knew it was going to be tough and I didn’t have a lot of confidence going into the match and sometimes it’s hard to find that confidence on the court but I was able to win a close contest and sometimes that can be a springboard for success so I am hoping for that”. He said.

Steve Johnson beat Yasutaka Uchiyama 7-6, 6-3, and in the upset of the day Sam Querrey, the number four seed was sent packing by fellow American Brandon Nakashima 6-3, 6-4.

Related Topics:John Isner
Up Next