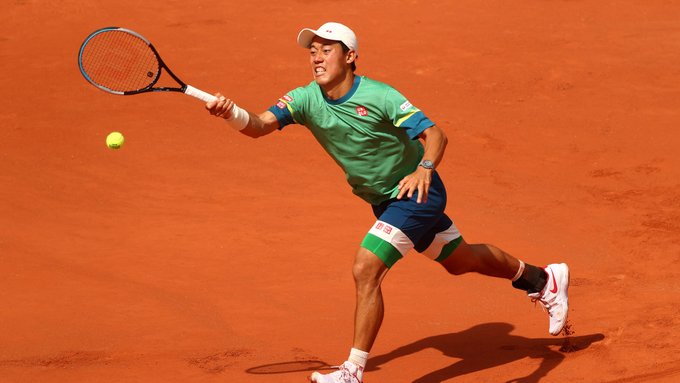 Khachanov saved a break point before breaking serve in the fifth game to take the first set 6-4. Nishikori broke twice in the fourth and eighth games to take a 6-2 lead.

Khachanov saved five break points in the fifth game at deuce before breaking twice in the third and seventh games to claim the third set 6-2.

Khachanov got a break in the third game to take a 2-1 lead, but Nishikori broke straight back to draw level to 2-2. Nishikori saved a total of three break points before closing out the fifth set 6-4 with his 57th winner in the final game.

Nishikori has claimed the 26th five-set match of his career and won ten of the last 11 five-set clashes. Nishikori also needed five sets to come through his first round match against Italian qualifier Alessandro Giannessi.

“I just tried to stay calm. Losing the third set was hard. Playing an aggressive tennis was the key to win. Trust me, I hate playing five sets. I am not doing this on purpose”, said Nishikori.

Nishikori will face Henri Laaksonen, who followed up his win against Yannik Hanfmann with a 6-3 2-6 6-3 6-2 win over Roberto Bautista Agut. Laaksonen saved three match points in the final round of the qualifying round against Juan Manuel Cerundolo.

Fabio Fognini beat Marton Fucsovics 7-6 (8-6) 6-1 6-2 to reach the third round. Fognini earned an immediate break in the first game, but Fucsovics broke straight back to draw level to 1-1. Fucsovics saved a break point in the fourth game. The Hungarian player rallied from 0-30 down to get his second break for 4-2.

In the seventh game Fucsovics wasted two game points for 5-2. Fognini recovered from 15-40 down to break back

Fognini broke straight back at deuce to draw level to 4-4 en route to the tie-break. The Italian player went up a 3-0 lead with a mini-break, but Fucsovics broke back to draw level to 3-3. Fognini wasted a set point at 6-5, but he sealed the tie-break 8-6 on his second chance with a service winner.

Fognini went up a double break in in the second and fourth games and saved four break-back poto race out to a 5-0 lead. Fucsovics held serve to 15 to close out the second set 6-1.