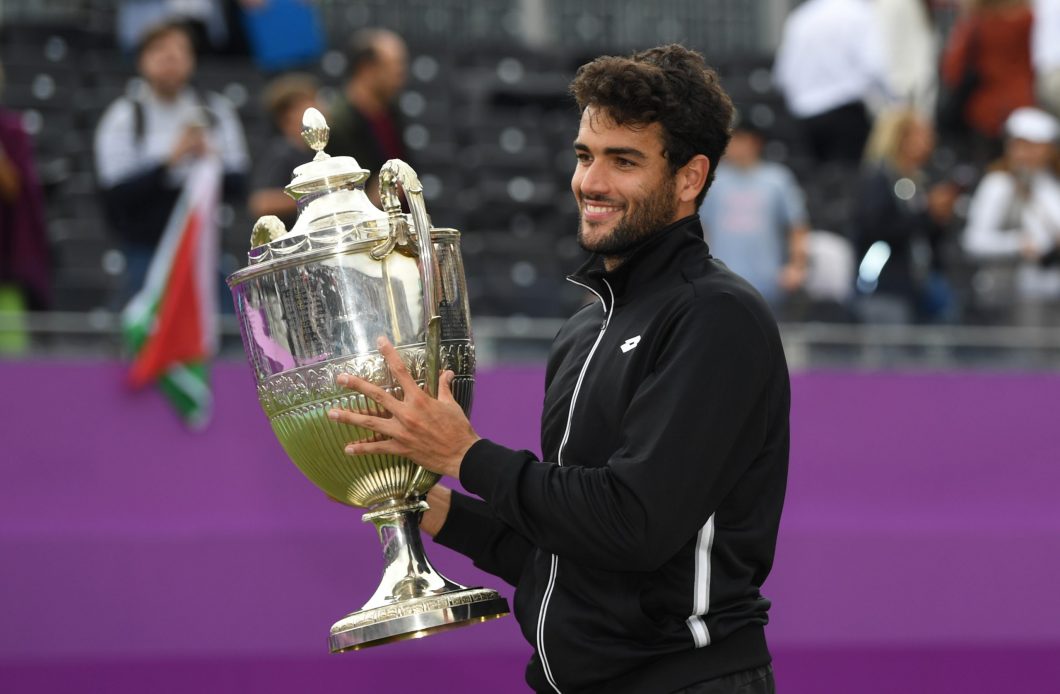 Italy’s Matteo Berrettini says he has fulfilled a childhood dream by becoming the first Italian in history to have won the Cinch Open at The Queen’s Club in London.

The world No.9 required two hours to edge out home favourite Cameron Norrie 6-4, 6-7(5), 6-3, in what was a closely contested encounter. Impressively Berrettini didn’t face a single break point throughout the final as he won 91% of his first service points and fired 19 aces past his opponent. Claiming his first ever ATP 500 trophy at the age of 25 and his fifth ATP title overall.

“He’s a great player. We had never played against each other,” Berrettini said in tribute to his opponent after their match. “This year he has shown how he can play on all the surfaces. He has made finals and is playing great tennis. I’m sure he’s going to win a title really soon.”

With the match split at one set all, there was little to distinguish between the two players until a tense Norrie service game during the eighth game of the decider. Serving down 4-5, the Brit hit a double fault to put proceedings level at 40-40. Then a Berrettini forehand winner, followed by another unforced error from Norrie enabled the top seed to break for a chance to serve the match out. Something he did with a love service game.

The 25-year-old has become the first person to lift the Queen’s title on their debut since Boris Becker in 1985. He is only the second player from his country to have contested a final in the tournament’s history after Laurence Tieleman in 1998.

“It’s been an unbelievable week. If I think about his (Becker’s) name and my name (on the trophy) it’s crazy,” Berrettini reflected.
“I have been dreaming about playing this tournament. I watched it when I was a kid and now I have the chance to lift the trophy so it’s a dream come true.’
“I can not thank my team enough,” he added.

Norrie, who is currently at a ranking high of 41st in the world, continues the search for his maiden Tour title. It is the fourth final he has lost and the third this season. He was also runner-up in Estoril and Lyon earlier this year. On the other hand, Norrie is currently playing his best ever season in terms of matches won with a win-loss record of 29-12.

“All credit to Matteo and his team. Great week for you and you’re just too good today. You were better than me on the big points,” he said during the trophy presentation.
“I’ve really enjoyed my tennis here (at Queen’s). It was a great week. It’s obviously great to have some tennis back in London and on the grass-courts.”

Berrettini’s career record on the grass now stands at 17-5.