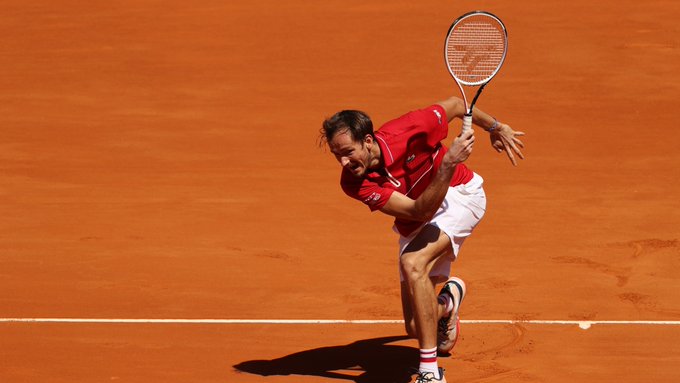 On his fifth attempt Daniil Medvedev has won his opening match at the French Open after knocking out world No.37 Alexander Bublik.

The 25-year-old, who had only ever recorded 11 Tour wins on the clay before the tournament, surged to a 6-3, 6-3, 7-5, win on Court Philippe-Chatrier. During the match Medvedev hit 28 winners to 16 unforced errors as he broke his Kazakh rival seven times. He now leads Bublik 3-0 in their head-to-head and has recorded 19 wins so far this season.

“I’ve warmed up really well before the tournament. I’ve never won at Roland Garros before. I was really happy and determined to win,” Medvedev said in French afterwards.
“Even when I was down in the third set. I think I played a very solid match.”

Despite entering the men’s draw as the second highest ranked player, Medvedev’s record at Roland Garros has been full of disappointment. Despite his numerous accolades achieved on the Tour, he had never won a match in Paris. Illustrating his turbulent relationship with the clay. Bidding to end his losing streak, Medvedev took on the unorthodox Bublik who has reached the quarter-finals of Masters tournaments in Miami and Madrid already this season.

After dropping his opening service game, the Russian soon found his footing in the match with the help of a four-game winning streak. Capitalizing on some tentative play coming from across the court. In the lead, the world No.2 looked determined and comfortable as he closed the first set in just 30 minutes following a Bublik double fault.

In the driving seat, Medvedev continued to take advantage of what was some sluggish play from Bublik who continued to leak errors on the court. Racing around the court he dictated the second frame from the onset which brought delight to his camp watching from the sidelines. Ironically, he has a French coach and speaks the language fluently. The only blip occurred five games into the match when he was leading 4-0 before Bublik retrieved one of those breaks.

Besides his opponent, Medvedev also had to contend with the wind moving the ball all over the court. Nevertheless, he failed to derail him as he sealed a two-set lead with relative ease. Doing so on his fourth set point after a forehand shank from Bublik.

However, the showdown wasn’t completely one-sided to the annoyance of the former US Open finalist. An elevation in Bublik’s form saw him pose as a more fierce threat during the third frame as he broke for a 5-3 lead before a nightmare game saw him get broken once again. Overcoming the blip, Medvedev went on to seal the win with a love service game.

“I felt that I was playing not so well in my previous tournaments on clay but as soon as I arrive here (in Paris) I felt extremely comfortable,” said Medvedev.
“The balls are suiting my game, I can really hit them and everything goes inside the court. I’m running and moving well as well.’
“I hope to try to go as far as possible and to keep keep playing that level of tennis.”

Medvedev will play either Tommy Paul or Christopher O’Connell in the second round.

Jannik Sinner On Marathon French Open Win: ‘It Was Not Easy But I’m Happy’