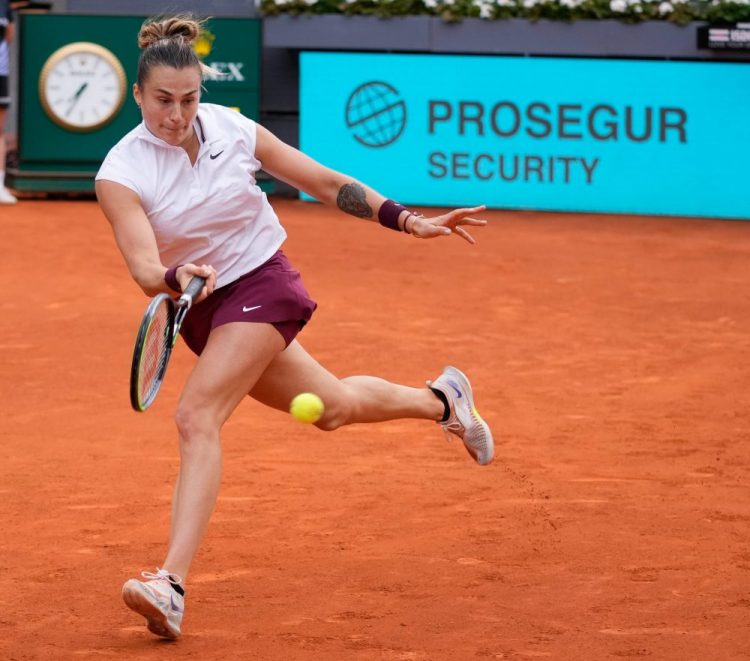 Aryna Sabalenka believes her notable improvement on the clay has been achieved due to a change in how she approaches the surface mentally.

The Belarusian lifted the biggest title of her career to date on the surface at the Madrid Open on Saturday. In the final she rallied to a three-set win over world No.1 Ash Barty to avenge her loss to the Australian in Stuttgart a couple weeks earlier. She has now won ten out of 11 matches played on the clay so far this year which is more than she has won during each of her three previous seasons. Prior to 2020 she has only reached the final of a WTA event on the dirt once.

Speaking to reporters following her triumph in Madrid, the 23-year-old says she had been ‘overthinking’ about playing on the surface until this season. Instead she has taken a more relaxed approach which seems to have done wonders to her game.

“I would say before I was thinking too much about the clay court, that this is a surface not for me, that it’s really tough to play on with long rallies,” she said.
“This year I kind of relaxed and just played my game. I worked a lot on the movement, so I prepared myself really well.’

It has to be noted that conditions in Madrid also favour the big hitters such as Sabalenka. Due to Madrid’s high altitude the ball travels faster than other tournaments in Rome and Paris.

It remains to be seen if the breakthrough will do any wonders for Sabalenka in the Grand Slams. At the French Open she has only managed to claim back-to-back wins in one out of three appearances. Reaching the third round in Paris last year. Despite being ranked continuously in the world’s top 20 since August 2018, she has only managed to reach the fourth round of a major twice so far in her career.

Nevertheless, things are going in the right direction for Sabalenka who will rise to a ranking high of fourth in the world on Monday. She is also a top-five doubles player on the Tour as well.

“That’s unbelievable. That’s crazy,” she commented on her rise to No.4. “I’m really happy with this improvement. There are still a lot of things to improve.’
“I’m not really focusing on the ranking. I’m focusing more on my game” Sabalenka added.

Sabalenka will be seeded seventh at the upcoming Italian Open where she has a bye in the first round. Her opening match will be against either Spain’s Sara Sorribes Tormo or Italy’s Camila Giorgi.