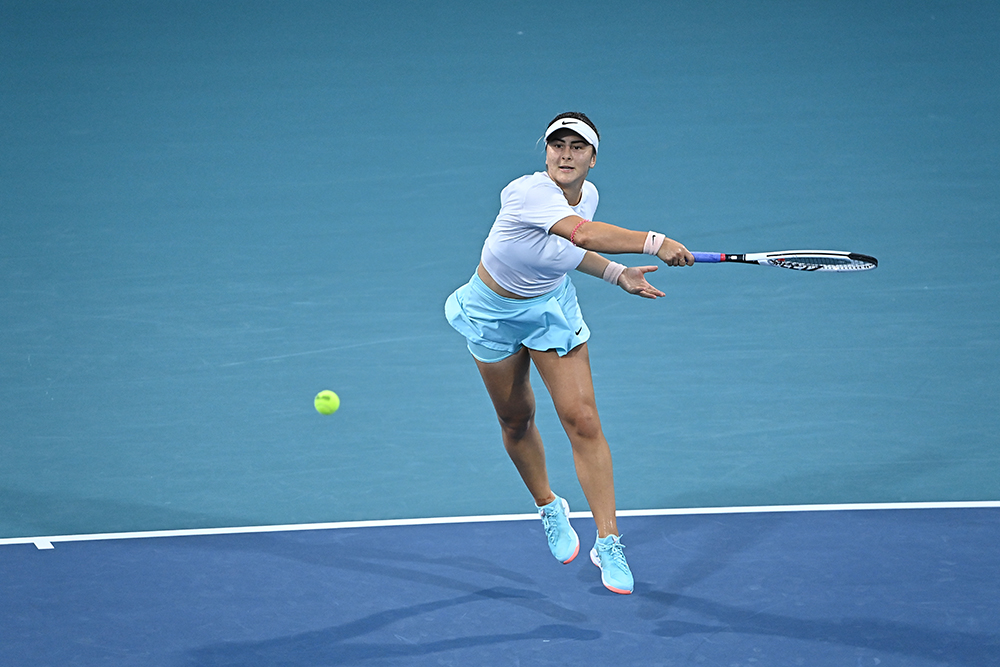 Bianca Andreescu will appear in her first final since her 2019 US Open triumph (miamiopen.com)

In 2019, both Barty and Andreescu achieved major breakthroughs (literally), winning their first Slam titles, as well as several other big tournaments.  But both would subsequently miss around a year of action, making their returns just two months ago.  Now they’re back to playing their best tennis, and vying for another big title in their first career meeting.  Along with Naomi Osaka, Ash and Bianca have separated themselves from the rest of the tour, and are creating an elite aura around themselves.

Barty was the champion of this tournament two years ago, her first WTA Premier Mandatory title (now a “WTA 1000” event).  Just two months later, she claimed her first Major at Roland Garros.  And she ended 2019 as the world No.1, after also winning the WTA Finals.  Ash only played 14 matches in 2020, choosing not to leave Australia due to the pandemic.  Yet despite that lack of match play, she’s gone 13-2 in 2021, and has advanced to the final in her first tournament outside Australia in over a year.  Barty is looking to defend a title for the first time in her career.

Just two weeks before Barty prevailed in the 2019 Miami event, Andreescu was the surprise winner in Indian Wells.  She would go on to only play one match on clay that season due to injury, but immediately started winning again once returning to North America.  Bianca prevailed at the Rogers Cup in her home country of Canada, and proceeded to win her first Slam at the US Open. But injuries and pandemic restrictions prevented Andreescu from playing at all in 2020.  After nearly 16 months, she returned to action at February’s Australian Open.  And now in just her third tournament, she’s reached the championship match, and is looking to collect the only big North American title she’s yet to win.

Each player has won five matches to reach this final, though Andreescu has spent nearly three more hours on court.  Her semifinal against Maria Sakkari lasted almost twice as long as Barty’s semi, and concluded around 1:30am local time.  Bianca has now played four consecutive three-setters, while Ash has advanced a bit more easily after saving a match point to escape her opening round.  Andreescu has now secured 20 of her last 23 deciding sets, which reveals her ability to elevate her game under pressure.  But Barty’s survival skills are almost as impressive, as she’s taken 22 of her last 27 deciding sets.

Both possess a wide array of shots, which should make for some creative and engaging rallies.  Without any previous encounters between the two to dissect, it’s hard to know what the deciding factors will be on Saturday.  But what we’ve seen out of Andreescu this fortnight is reminiscent of her 2019 form, when at one stretch she prevailed in 27 consecutive completed matches (not counting retirements or walkovers).  When Bianca is healthy and playing this well, she can seem unstoppable.  And unlike Barty, she will not have the added burden of trying to defend her title.  Andreescu is 3-0 in North American finals, and I suspect she’ll extend that record to 4-0 on Saturday.

Also on Saturday, the Men’s Doubles Championship (Not before 3:30pm):

Nikola Mektic and Mate Pavic (2) vs. Dan Evans and Neal Skupski – Mektic and Pavic are already going for their fourth title this year, and are 24-3 since forming this new partnership.  Skupski claimed a doubles title just two weeks ago in Acapulco with his brother Ken. 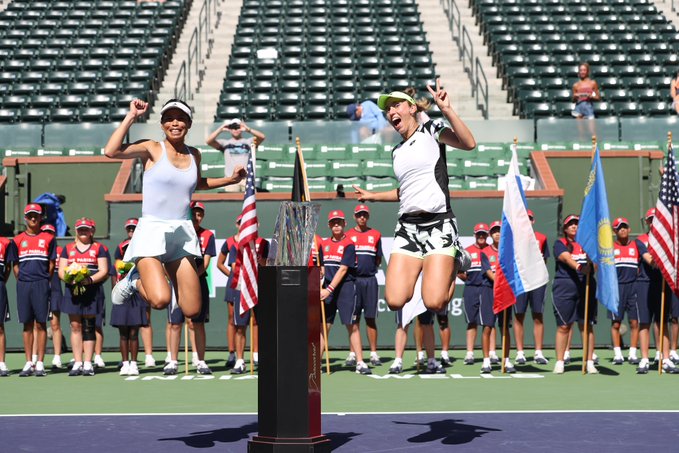 This year’s Wimbledon doubles champions Hsieh Su-Wei and Elise Mertens lifted the Indian Wells doubles title after their 7-6 (7-1) 6-3 win over Veronika Kudemertova and Elena Rybakina after 1 hour and 34 minutes.

Hsieh Su Wei and Mertens won their second title as a team following their Grand Slam triumph at Wimbledon.

Hsieh teamed up with Mertens for the first time during the clay-court season this summer. They fended off match points to beat Kudemertova and Elena Vesnina in the Wimbledon final.

Kudemertova and Rybakina played their third doubles tournament as a team. Rybakina qualified for her first doubles final.

Both teams traded breaks twice at the start of the second set. Hsieh and Mertens earned the crucial break at 5-3. Mertens served out the win in the ninth game.

“We tried to play aggressive. Su-wei at the net, me from the back so she can cross. I think it all clicked a little bit better in the second set. So we are really happy with the win and qualified for the WTA Finals, so we are very happy for that too”, said Mertens. 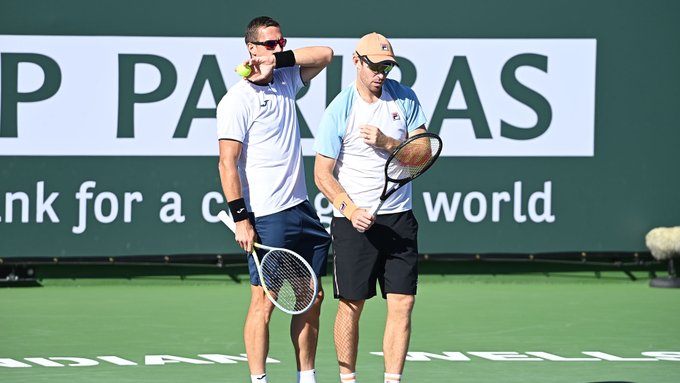 John Peers and Filip Polasek won their first team title with a 6-3 7-6 (7-5) win over Aslan Karatsev and Andrey Rublev at the BNP Paribas Open in Indian Wells.

Peers and Polasek were not able to convert two match points at 5-3 on Rublev’s serve and were broken in the next game when they were serving for the match. Both teams traded breaks en route to the tie-break. The Australian and Slovakian team came back from 3-5 down by winning five consecutive games to claim the second set 7-5.

Peers and Polasek reached the San Diego final in the build-up to Indian Wells.

“It’s always great fun getting back to the desert and playing here. To be able to say we have won the title here is very special. We started pretty slow as but we put in some good work pre-US Open. It’s been a lot of fun since and we have continued to work and enjoy playing together. We were riding the doubles rollercoaster and will try to get results like this more often. We are looking forward to continuing together”,said Peers.

Polasek claimed his 16th title and his second Masters 1000 trophy following Cincinnati in 2019.

“I am really happy the way we played. We came here early, which helped us to adapt to the conditions. It was very different to play in the day than in the night sessions, which we played in our last matches. We were able to adapt the best of all teams”, said Polasek.

Rublev and Karatsev were on a eight-match winning streak. They claimed the Doha title earlier this year.