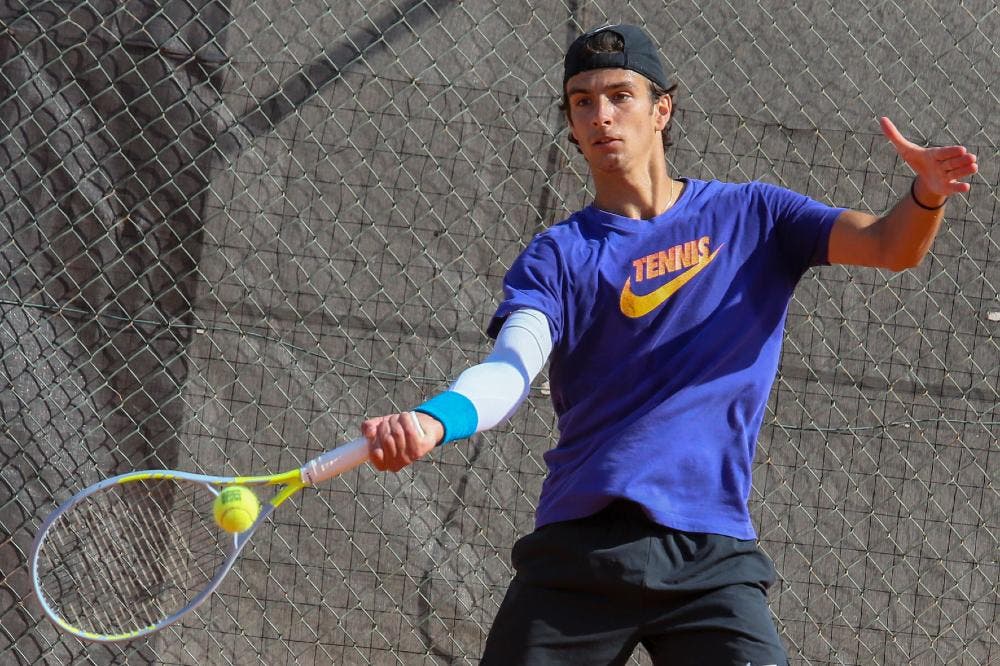 Italian Next Gen star Lorenzo Musetti cruised past Dennis Novak 6-0 6-1 in windy conditions in 53 minutes at the Sardegna Open in Cagliari.

Musetti converted his third break point in the first game and went up a double break from 0-30 down in the third game to race out to a 4-0 lead. Musetti never looked back and closed out the first set 6-1 with his third break in the seventh game after just 21 minutes.

Novak rallied from 0-40 down in the first game of the second set on serve, but Musetti went up a break at deuce.

Musetti set up a second round match against world number 32 Dan Evans from Great Britain. The Italian teenager did not drop his serve in the whole match, but he faced a total three break points in the second and fourth games of the second set. Musetti earned two more breaks at love to close ou the second set 6-1 with a forehand lob. Musetti won 18 of his 25 first-service points. Last month the Italian teenager claimed his first top 10 win against Diego Schwartzman before losing to Stefanos Tsitsipas in Acapulco.

Musetti won 11 of 16 matches this year including ATP Challengers in 2021.

“It was an incredible match. From the beginning I felt so comfortable on the court and hitting the ball. I had really good feelings. Today was not easy. because there was a lot of wind and it was my first match after the hard-court season. I am very happy with my match. I was a bit nervous, because we had to wait longer thn we had planned before playing the match. We are are working very hard and I am very confident. Clay court is my favourite surface. Last year I reached the semifinal at this tournament. I hope to repeat this result this week and even win the tournament. I have never played against Evans, but I have seen him playing many times”, said Musetti.

Millman got an early break at love in the second game of the opening set to build up a 3-0 lead. Coria converted his third break point at deuce in the fifth game to draw level to draw level to 3-3. Coria saved three break points to hold serve after nine deuces. Millman got two mini-breaks to race out to a 5-1 lead. Coria pulled back on serve but Millman earned his third mini-break to win the tie-break 7-5.

Both players traded breaks in the first two games of the second set. Millman saved five break points to hold serve after five deuces in the fourth game, but Coria won the final three games with a break in the eighth game to claim the second set 6-3.

Marco Cecchinato edged past Thomas Fabbiano 6-4 4-6 6-3 after 2 hours and 21 minutes. Both players went on serve in the first six games with no break points. Fabbiano did not convert three break points in the seventh and ninth games of the first set. Cecchinato got the first break of the match in the 10th game to seal the first set 6-4.

Fabbiano saved three break points in the fourth game of the second set. Both players traded breaks in the the fifth and sixth games. Fabbiano fended off two break points to hold serve at deuce before earning his second break in the ninth game to claim the second set 6-4. Cecchinato got the only break in the sixth game to clinch the decisive set 6-3.

Jan-Lennard Struff saved five match points to edge Joao Sousa 1-6 6-1 7-5 to set up a match against British qualifier Liam Broady. The German player fended off three match points at 2-5 down and at 4-5 15-40 in the third set.

Gilles Simon rallied from one set down to beat Stefano Travaglia 1-6 6-3 6-4. Travaglia broke twice in the fourth and sixth games to win the first set 6-1 after 27 minutes. Both players traded breaks in the first two games of the second set. They went on serve until the eighth game when Simon converted his second break point after six deuces to claim the second set 6-3.

Simon went up a double break in the first and seventh games to take a 5-2 lead in the third set. Travaglia converted his second break point in the eighth game and held his serve for 4-5, but Simon saved a break point at 30-40 in the 10th game to serve out the match 6-4 after two deuces.