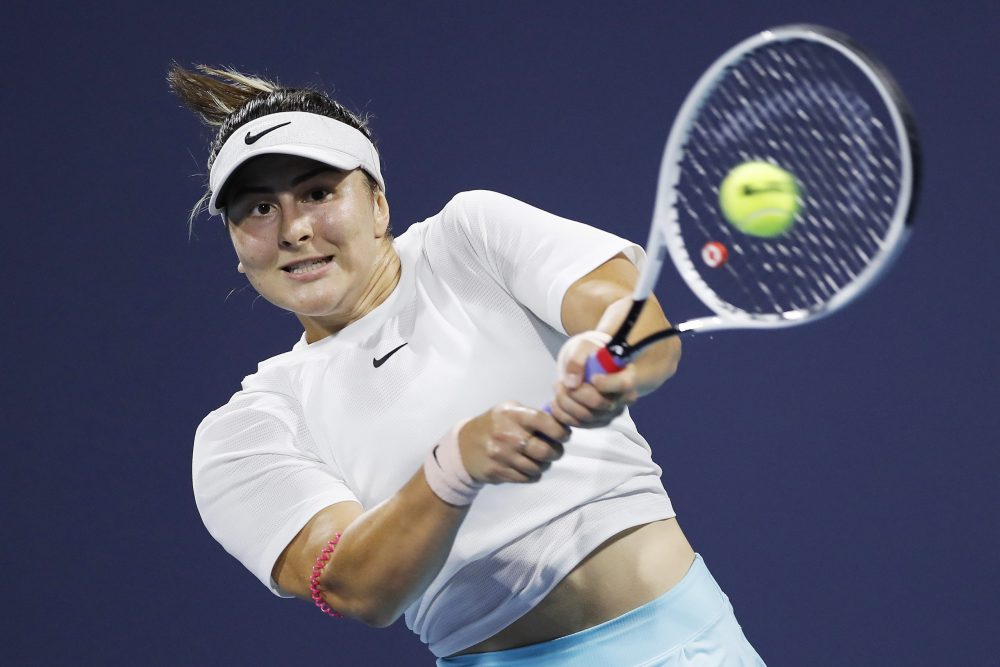 Bianca Andreescu is into the semifinals of the Miami Open after beating the Spaniard Sara Sorribes Tormo 6-4, 3-6, 6-3 in just under three hours.

The eighth seed hit 42 winners while her opponent produced 21 unforced errors during their marathon clash at the Hard Rock Stadium. It is only the second time Andreescu has played in the tournament after 2019.

“Man that girl can really run” she said in her on-court interview after the match, ” after the first set I was honestly so tired but we both fought really hard, she’s an incredible fighter, I have no idea how I pushed through but I fought as hard as I could and I’m super happy with how I pulled out but she played amazing tennis”

Andreescu was the third Canadian Sorribes Tormo has played in the last couple weeks after beating Eugenie Bouchard in the final in Guadalajara and losing to Leylah Annie Fernandez in the semi final in Monterrey.

The Spaniard was quicker out of the gate and she pounced on her Canadian opponent earning two break points in the opening service game of the match and breaking to take an early 1-0 lead.

After holding serve to consolidate the break she would earn two more breakpoints as the Canadian was struggling to get into the match and would break again to go up 3-0.

The number eight seed finally woke up and earned her first breakpoint of the match winning a long intense rally and finishing the point with a forehand winner.

It would take four cracks at it with the Spaniard doing a good job saving them before the Toronto native got herself into the match breaking to get one of the breaks back.

She would hold serve to make it 3-2 before pushing to try and go back on serve but the Spaniard continued to fight and battle and held serve. The match was turning into a huge fight with long rallies and two players going at it.

At 4-3 the Canadian would earn two more breakpoints and would break the Spaniard once again with a powerful forehand to go back on serve at 4-4. That break of serve seemed to rattle her and she struggled to hold serve and that’s when the number eight seed went for the lead and that’s what she got.

Andreescu would serve out the set in what looked like a major comeback and was one set away from the semis tomorrow.

Losing the first didn’t deter the Spaniard who in a repeat of the beginning of the first set would break again with a stunning forehand passing shot to once again take a 1-0 lead.

This time the lead didn’t last that long and the world number eight responded immediately getting the break right back. She would get broken the very next game and the set followed a similar pattern where both players couldn’t hold serve and traded breaks back and forth.

It was Tomo who would finally hold serve to make it 5-3 and would break once more the following game sensing fatigue from her Canadian opponent winning the second set and sending it into a third set.

The third set stayed on serve until 2-2 when the number eight seed would earn three chances to break. It was on the third chance when she got she would break to take a 3-2 lead.

The next game was a very tough one for the Canadian as she found herself facing three breakpoints but rallied to save all three and hold serve. She would increase her lead the following game breaking to take a 5-2 lead.

When serving for the match her opponent wasn’t giving in and continued to play her game from the baseline with long rallies and won four straight points to make it 5-3.

The number eight seed would respond the very next game winning four points in a row as well and sealing the set, the match, and the win with her trusty forehand winner.

“I never played her before and it’s really hard to tell how a player plays online rather than actually playing them so I think I got caught off guard just a little bit,” said Andreescu.
“I thought her ball would be a bit more heavy and deep and you really have to generate your own power. I felt like I was going for too much at the start but then I figured it out and I changed my game plan basically and I adjusted. The match was super up and down and it kept going like that and for me the main thing today was fighting harder than her and I know she is an incredible fighter so that was the main goal and I did that.”

She will now face Maria Sakkari who pulled off one of the biggest wins of her career beating Naomi Osaka and the Canadian finished the press conference by giving her thoughts on the match.

” I watched a little bit of that match, she played really well, she was dominating from the start and Naomi wasn’t quite there but she’s coming off a great win, I’m also coming off a big win too,” she said.
“I’m sure she is very confident and I’ve watched her play many times so I kinda know what to expect but obviously it’s different once I step out there and I’m going to have to adjust with what I know now and what I am going to see on the court but I know it’s going to be a battle and I’m really looking forward to it.”