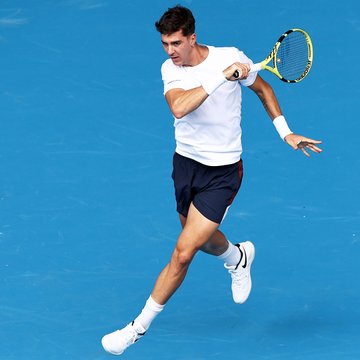 Kokkinakis returned to the ATP Tour last February from a right shoulder injury at the Murray River Open in Melbourne. The 24-year-old Australian player upset Roger Federer as a number 176 player at the 2018 Miami Open. This year he lost to Stefanos Tsitsipas in five sets at the Australian Open.

Kokkinakis rallied from 0-40 to save three break points in the opening game before breaking serve in the fourth game to take a 3-1 lead after a double fault from Mochizuki. Kokkinakis served out the first set at love as Mochizuki hit a forehand long.

Kokkinakis took a 2-1 lead after three consecutive breaks at the start of the second set. The Australian player went up a double break to open up a 5-2 lead, but Mochizuki pulled one break back with a backhand return winner to claw his way back to 3-5. Kokkinakis sealed the second set 6-3 after Mochizuki hit his backhand into the net.

Mochizuki was making his debut in a Masters 1000 tournament. The World number 630 player won the Wimbledon Junior title in 2019 and has a 1-2 record in ATP Challenger Finals.

“It was amazing to be there. I won two matches in qualifying. I was confident about the match, but he kept hitting big and he was a lot better than me”, said Mochizuki.

Bjorn Fratangelo scored his first win in Miami after his 6-4 6-4 win over Fernando Verdasco after 1 hour and 31 minutes setting up a second round match against 2020 Vienna finalist Lorenzo Sonego. Fratangelo earned his only break in the third game and saved a total of four break points in the fourth and sixth games to win the first set 6-4. Verdasco went up a break in the fourth game  to take a 3-1 lead, but Fratangelo came back by winning five of the next six games with a double break in the fifth and seventh games.

US Denis Kudla came back from one set down to beat Jeremy Chardy 3-6 6-3 6-3. Chardy converted his only break point at deuce in the eighth game to win the first set 6-3. Kudla claimed the second set 6-3 with a break in the sixth game forcing the match to the third set. Kudla converted his second break point in the third game and held his next service games to claim the decider 6-3.