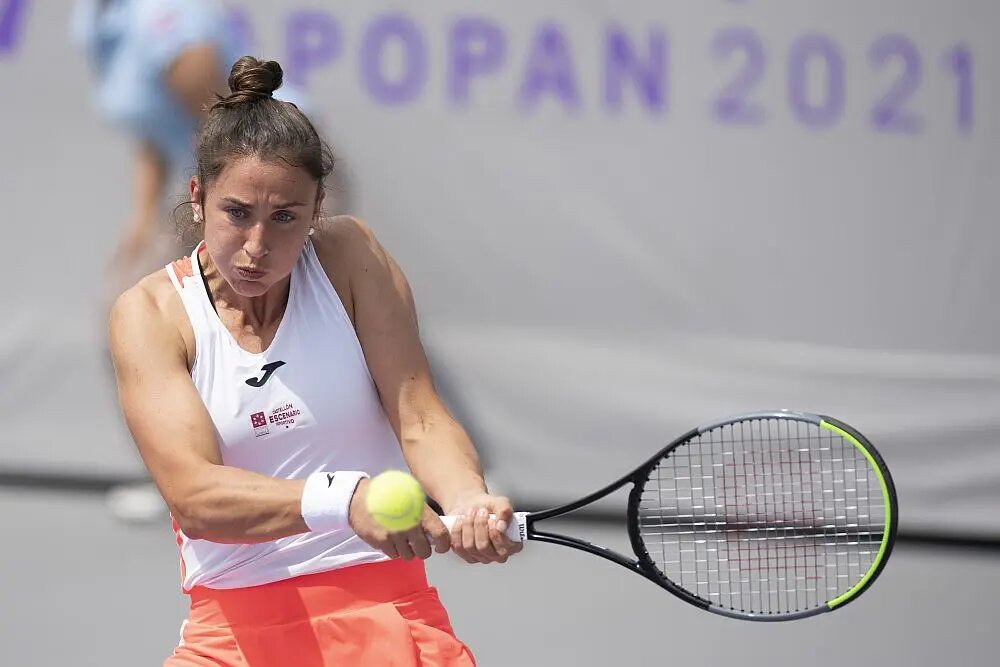 Sara Sorribes Tormo is the champion of the 2021 Abierto Zapopan in Guadalajara, Mexico after beating Eugenie Bouchard in straight sets 6-2, 7-5. She broke the world number 144 six times in the match while the Canadian hit 39 unforced errors.

“from the first point with my serve, I think I just try to stay there at the beginning because she was hitting so strong I just try to hold my serve and to make her think, I’m really happy with the way I played and happy to win,” Tormo told reporters following her win.

It was Bouchard who got off to the fast start after holding the opening service game of the match putting some early pressure on the Spaniard and earned an early break point but the world number 71 would have no trouble saving and holding serve.

The very next game the Spaniard had a look a three break points on the world number 144 serve and it was third time the charm as she broke forcing the error from her opponent to take an early 2-1 lead.

The Las Vegas resident responded immediately winning three straight points and earning three break points but it was the Spaniard turn to save all three playing some great tennis and managed to hold serve.

Once again at 3-2 the world number 71 faced two more break points but there was a lack of finish from the Canadian as Sorribes Tormo was able to hold her service game.

The Spaniard had a chance to go up a double break after serving an untimely double fault and was broken as she would send a return long and smashed her racket in frustration.

The world number 71 would serve out the first set to take it 6-2 and was one set away from the title.

The second set was a much more tighter affair with both players holding their opening service games before the Spaniard once again earned more break points and broke to take an early 2-1 lead.

The next game Bouchard had a chance to break back to go back on serve but again was denied by the world number 71. At 3-2 the Canadian had another chance and this time she made good breaking the Spaniard with a stunning forehand winner to make it 3-3.

After holding serve the Westmount native went on the offensive and earned three break points to take her first lead of the match and she did just that and broke to take a 5-3 lead and serve for the second set.

While attempting to serve for it Bouchard found herself facing more break points from the Spaniard’s aggressive game style and she would be broken once more.

Tormo took that momentum and earned three more break points the following game and would break to take a 6-5 lead and serve for the match. She would serve it out in style winning the set, the match, and the title.

After the match Bouchard gave her thoughts on the loss and she was disappointed she couldn’t get the win tonight.

“She get’s a lot of balls back so I didn’t figure out the right balance of being patient and aggressive, I felt when I was aggressive I was missing too many balls and I didn’t quite figure it out today,” she said.

She continued on to say “it seemed she didn’t give up, she gets a lot of balls back and that’s her game.”

Bouchard told Ubitennis how she plans to take this good result and use it for the rest of the season.

“It was such a tough week to come here from being in France and coming here like the day before playing so it shows me I can do it mentally, physically, I was able to win four matches and be close in the fifth so that just gives me confidence for sure”

She also spoke of what happened when she was up 5-3 in the second set and managed to lose four games in a row to lose the match.

“That was super frustrating, I felt like I was playing 12 and under tennis at some point and she was out grinding me and I shouldn’t have lost four games in a row like that in the end sometimes I didn’t know what to do.”

After the win Sorribes Tormo also spoke of the what was going through her head at that crucial turning point of the match.

Both players will be making the short trip to play in the Abierto GNP Seguros in Monterey.

Cristian Garin and Facundo Bagnis reach the final in Santiago