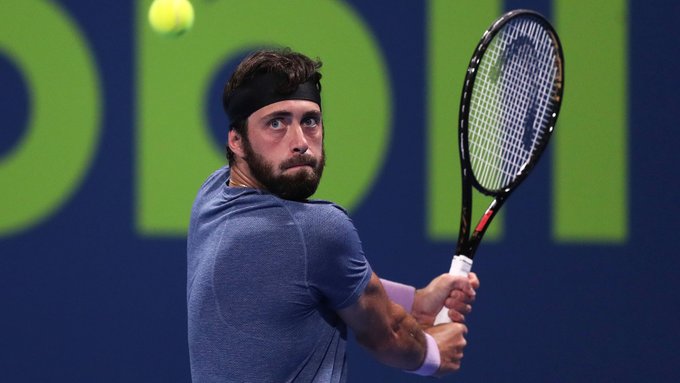 The Georgian sealed one of the best victories of his career with his heavy-hitting consistency proving too much for Federer.

Although Federer made a great start, he couldn’t hang on as he falls to defeat in his second match back from knee surgery.

Basilashvili will now play Taylor Fritz in the semi-finals tomorrow.

After saving break point in his first service game, Federer made a good start on return as his free-flowing attacking play was a perfect counter-punch to Basilashvili’s power.

A backhand-down-the-line sealed the first break for the world number six for a 3-1 lead.

Despite a couple of break points in the next game, Basilashvili really couldn’t apply the consistent amount of pressure to trouble the second seed in the opening set.

Serving with relative ease and comfortable efficiency with maximum effect, Federer closed out the first set in 38 minutes.

However the test was always going to be whether Federer would be up to the task of keeping up the fitness levels and maintaining his first set level.

The answer we would get would be no as Basilashvili raised his level in the second set and applied his aggressive style onto Federer.

Federer had no real answer for Basilashvili’s consistent heavy-hitting and failed to ask enough questions like he did in the opening.

Six of seven games went the world number 42’s way as he took the second 6-1 and forced a decider.

There was nothing to separate both players in the deciding set as Federer’s clinical edge returned in the final set.

However Basilashvili’s consistent pressure and power was causing the Swiss problems as he looked to seal the break.

Some big plays from Federer saw him save three break points and hold for 4-3. Unlike yesterday’s light-hearted approach, Federer was much more focused as he seemed desperate to win this match.

Basilashvili managed to save match point and hold for 5-5 before winning the next two games with relative ease to seal one of the biggest wins of his career.

There is much encouragement for Federer to take heading into Dubai next week but there was a lack of match-fitness as he failed to deal with Basilashvili’s consistent power.

The Georgian will now play Taylor Fritz for a place in the Doha final.

Fritz comes back to beat Shapovalov in Doha