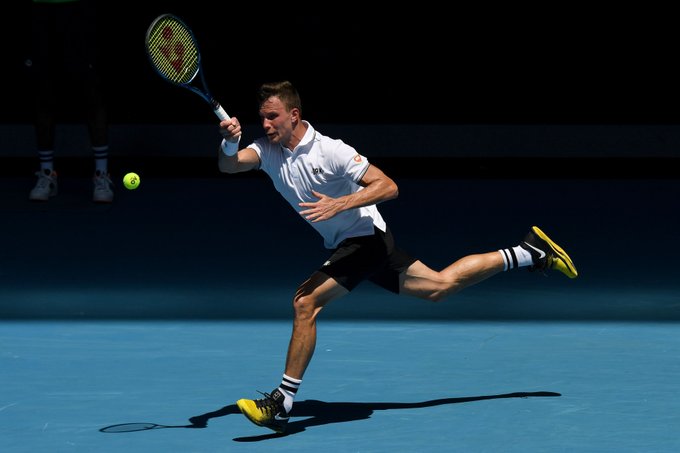 Marton Fucsovics is through to his third ATP final after beating Borna Coric 6-4, 6-1 in an hour and 25 minutes at the ABN AMRO World Tennis Tournament in Rotterdam.

The 29-year-old Hungarian broke Coric fives time and won 75% of his first service points at the Ahoy Arena to become only the second qualifier in history to reach the title match. The first was France’s Nicolas Esdcude back in 2001. It is also the first time Fucsovics has beaten Coric on the Tour following on his forty attempt.

” I come here every year, it’s not my favourite surface but I can say after this week I love it, I love the atmosphere, I love the people here,” the world No.59 said during his press conference.
“It’s a very famous tournament, it has a long history and I haven’t seen any Hungarians on the winners list but hopefully I can do that tomorrow.”

Coric, who is ranked 33 places higher, didn’t get off to a good start and Fucsovics made sure to take advantage of it in the first game of the opening set by earning three early breakpoints. He broke by winning an intense rally and finishing the point with a sensational forehand winner down the line that was almost picture perfect. There was a small lapse in his game at 3-2 when he served an off game and the Croat would break to put the set back on serve.

That’s when the world number 59 went into full overload earning two more breakpoints the following game after playing a solid point and finishing with a powerful smash at the net. He would break once more as the world number 26 would send a ball long to regain a 4-3 lead. The underdog would save two breakpoints from the Zagreb native who was starting to find his game playing some outstanding tennis and eventually serve out the first set.

The second set is where the Hungarian dominated and went for the kill. Eager to book his spot in the final against Andrey Rublev on Sunday afternoon. At 1-1 he would earn another breakpoint winning a long intense rally with a stunning forehand winner.

He would break the following point as Coric hit another unforced error and was visibly frustrated as he belted out in Croatian. After holding serve to consolidate the break Fucsovics smelled blood and once again unforced errors were creeping into the Croats game and he would break once again to take a commanding 4-1 lead.

Once again after having no issues holding serve the world number 26 was serving to stay in the match but the day belonged to the Fucsovics as he finished the match in style overpowering his opponent to break for a third time to take set and the match.

When asked what it is going to take to end up victorious on Sunday against one of the best players in the world, the Hungarian hopes he will be cheered on by his country.

” It’s going to be a tough match, I just want to enjoy it, I want to play my best tennis, I hope the people from Hungary will be supporting me “

Fucsovics beat Rublev in a Davis Cup World Group Playoff while Rublev got his revenge three years later at Roland Garros. Although both those meetings were on a outdoor clay court and this will be their first meeting on indoor hard.